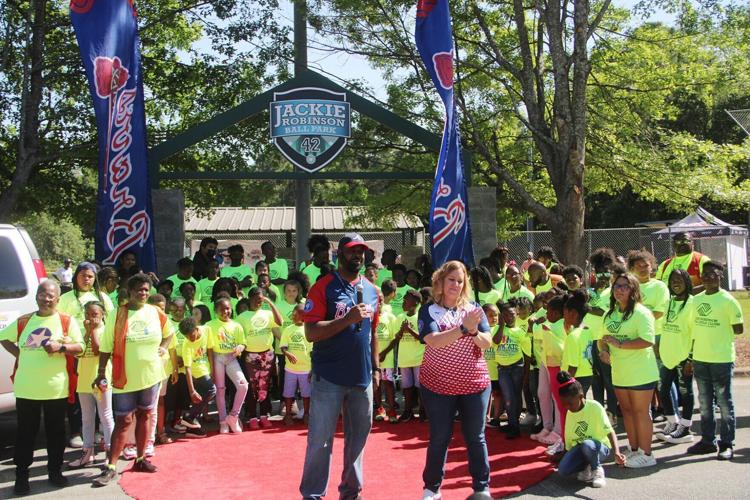 Stephen Francis and Amy Hagan of the Jackie Robinson Boys and Girls Club talk about their kids and staff as the Atlanta Braves brought the World Series trophy to the club to celebrate Jackie Robinson’s 75th anniversary of breaking baseball’s color barrier. The Braves also presented the club with a new 15-seat passenger van. 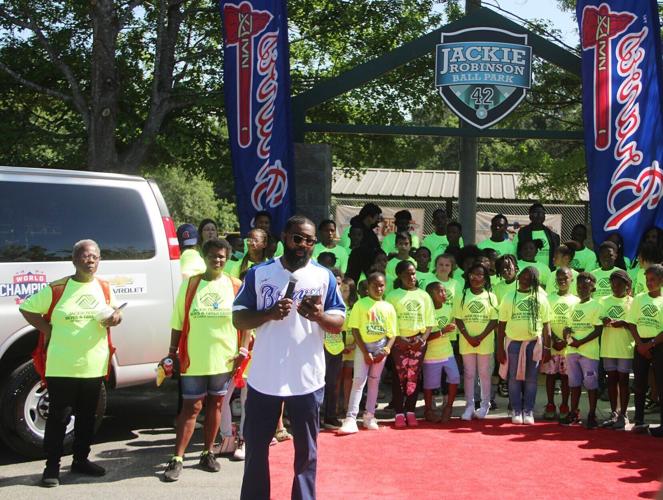 Cairo Mayor Booker Gainor thanks the Braves during his remarks Friday afternoon. 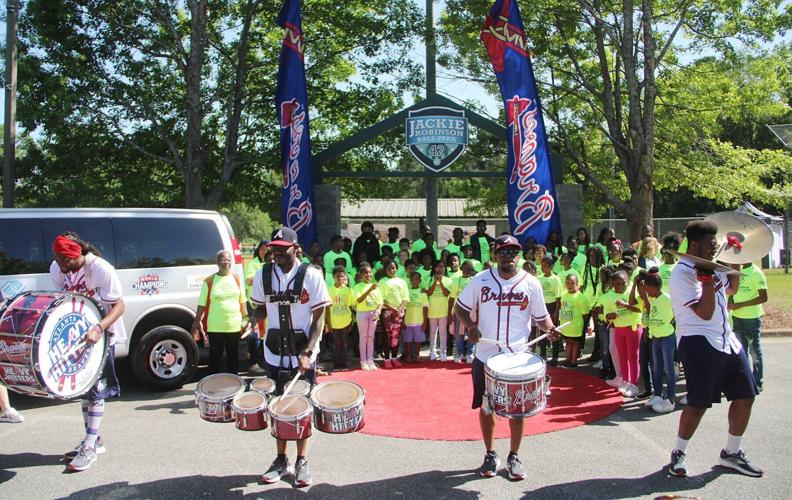 The Heavy Hitters perform for the crowd. 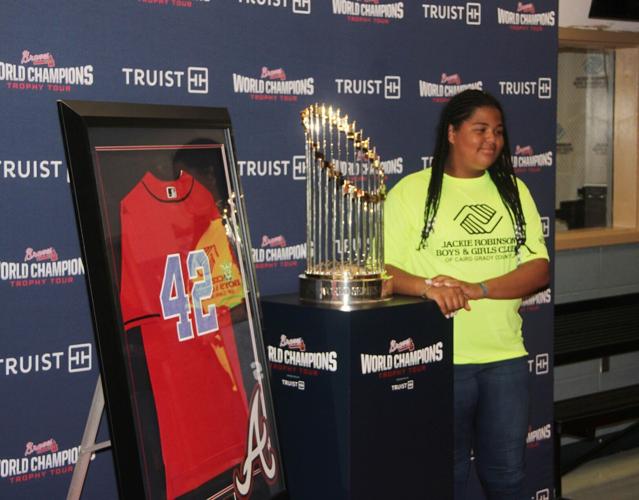 Kaylah Paytee gets her picture made with the Atlanta Braves World Series trophy. At the left is a framed jersey of Jackie Robinson’s uniform number, which has been retired throughout Major League Baseball. 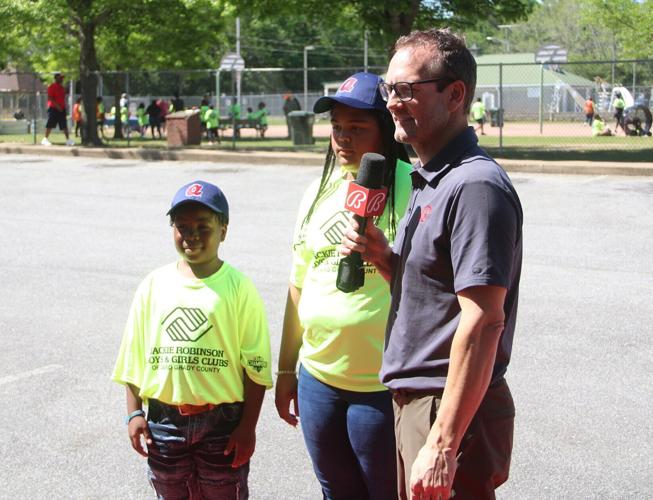 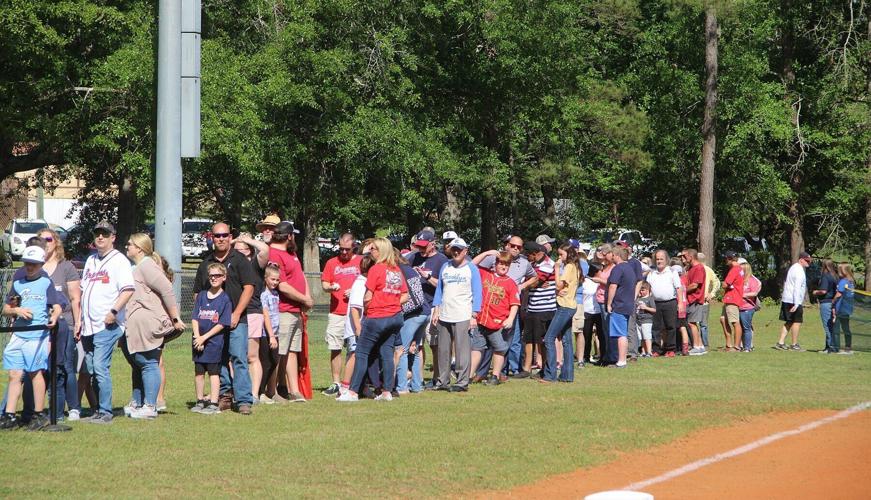 Fans line up to get their picture made with the Atlanta Braves World Series trophy.

Stephen Francis and Amy Hagan of the Jackie Robinson Boys and Girls Club talk about their kids and staff as the Atlanta Braves brought the World Series trophy to the club to celebrate Jackie Robinson’s 75th anniversary of breaking baseball’s color barrier. The Braves also presented the club with a new 15-seat passenger van.

Cairo Mayor Booker Gainor thanks the Braves during his remarks Friday afternoon.

The Heavy Hitters perform for the crowd.

Fans line up to get their picture made with the Atlanta Braves World Series trophy.

CAIRO, Ga. — It was more than just having the World Series trophy on hand that was cause for celebration Friday afternoon at the Jackie Robinson Boys and Girls Club in the small town of Cairo, Georgia.

“It’s a day for the whole world to enjoy,” said Donell Washington, clad in a Jackie Robinson Boys and Girls Club shirt. “It was something he worked hard for. He showed a person’s character defines who you are, not what you do. He just loved people.”

Robinson, born near Cairo, was tapped by Brooklyn Dodgers executive Branch Rickey to be the first Black player in modern baseball. His first game with the Dodgers was April 15, 1947. He drew a walk and scored a run as the Dodgers beat, as circumstances would have it, the Braves, then based in Boston.

Robinson’s family moved to California when he was just an infant, but his legacy and impact resound in his hometown.

“Greatness resides in Cairo and Grady County,” she said. “Jackie Robinson opened doors for so many races. He showed they can excel in whatever they want to do, just like he did. He never gave up, he never gave in and he never gave out. He made a difference for people who were marginalized.”

“He sacrificed a lot for us,” said Kaylah Paytee, one of the club members who got her picture taken with the trophy before the public lined up. “We’re honoring what he did for racial equality.”

He retired from baseball after the 1956 season and was inducted into the Baseball Hall of Fame in 1962.

Robinson passed away in 1972 but his widow Rachel will turn 100 years old this July.

“His legacy will last for many decades to come,” Dr. Walden said. “Jackie Robinson was a pioneer for human dignity and a champion for justice. We’re thankful for his widow, Rachel. She kept his legacy alive through the Jackie Robinson Foundation.”

Major League Baseball observes every April 15 as Jackie Robinson Day. Coaches and players throughout the majors wear the number 42 instead of their own usual jersey number.

Major League Baseball retired the number 42 from use throughout all 30 franchises in 1997, allowing those players who had the number for their jersey to wear it as long as they were active. The last player to wear 42 on a regular basis was New York Yankees pitcher Mariano Rivera. He retired in 2013, and no other player has worn the number since as their own.

The Atlanta Braves franchise and the club have formed a bond over the last few years. The Braves are taking the World Series trophy, which won they last November, beating the Houston Astros in six games, around the South for their fans to enjoy.

And fans in Cairo, many decked out in Braves hats and jerseys, lined up down the third-base line and beyond at the club’s baseball diamond, waiting in the warm South Georgia sun to get their picture with the trophy.

The Braves also presented the club with a 2022 15-seat Chevrolet van and will have kids from the club come to a game on April 22 to sing the national anthem before a game.

The club treasures the relationship that has been struck with the Braves franchise.

“It is immeasurable,” said Charles Renaud, one of the club’s founders and a longtime board member. “It brings eyes and opportunities to the Boys and Girls Club. Someone may be watching this and say they want to serve.”

Renaud said when he saw the trophy, he thought of the diverse team it took for the Braves to win it, their first since 1995. He praised the Club’s staff for the work they do with the club’s members.

“It didn’t matter what color you were or how tall you were, it meant you were for working a common goal,” he said. “Here, the kids are our team. But there’s so much more to that trophy. The Braves have their trophy and we have our trophy and it’s in that building right there, the Jackie Robinson Boys and Girls Club.”

“Today has been a life-changing experience,” Jackie Robinson Boys and Girls Club director Stephen Francis said. “The kids will never forget it. They’ll see what their hard work and their diligence will bring them.”