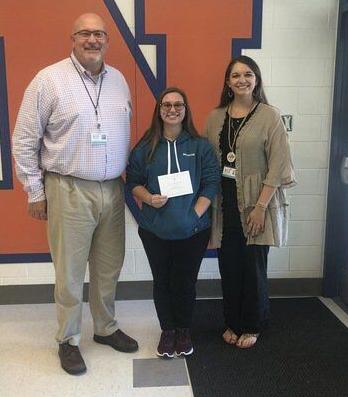 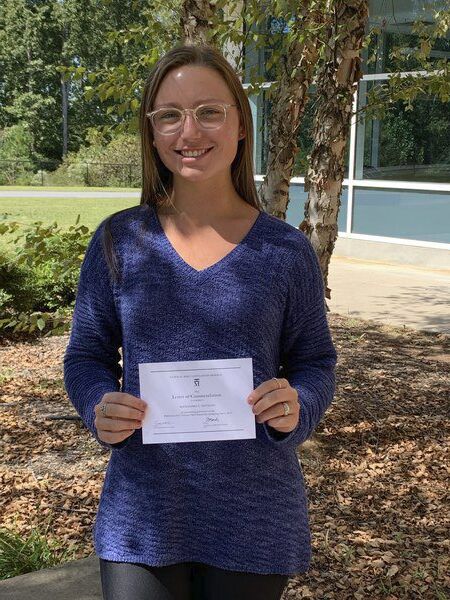 According to NMSC, approximately 34,000 Commended Students throughout the nation are being recognized for their exceptional academic promise. Commended Students are among the top 50,000 scorers of more than 1.5 million students who entered the 2021 competition.

For Defalco, being recognized as a 2021 Commended Student "is an honor" and knowing that she is among the top 50,000 students who took the PSAT or qualifying test makes her feel "very accomplished."

"I'm intrinsically motivated to do the best that I can," she said. "I like to learn, especially in math, which I think most people find interesting."

Throughout her high school career, Defalco has worked towards completing the Super Seven Math Challenge, a charge to complete seven math courses by graduation, which is a feat that she is very proud of.

Defalco attributes her academic success to her love of learning and the encouragement of those she looks up to.

"My parents, of course, have always been there for me," Defalco said. "They've been my support system since day one. My teachers have also pushed me and given me what I need to excel — Mr. (Josh) Deslattes especially, because he has always helped me prepare for my future."

Deslattes is the Advanced Placement (AP) and gifted coordinator at Coahulla Creek and has been a teacher and mentor to Defalco since her freshman year.

"Alex is the type of student that really makes teaching fun. Not because of how smart she is or how good her grades are, but because no matter what, she is engaged and motivated," Deslattes said. "I do not know if it is on her radar or not, but if she would be willing to run for president, I promise you, she has my vote. I truly believe her options are endless, and given her level of compassion and social awareness, I know she will have a dramatic impact on her community."

Outside of academics, Defalco participates in theater, and likes to knit, crochet and make soap.

"It's like a hodgepodge of different interests," she said.

Although she doesn't quite know where she will attend college, she knows she will major in statistics, "because it's math, and it just makes sense."

Defalco's scholastically talented counterpart Caldwell is also motivated to do well in school by a love of learning.

"I've always been one to push myself to be top of the class simply because I love learning new things," Caldwell said. "It's really cool to know that I'm in the top percentage of students in the country who were recognized."

According to Ryan Reece, Caldwell's dual enrollment advanced composition teacher, "Lindsey is a driven and focused student who has an uncanny ability to make meaningful and purposeful connections across subject areas."

Though literature is her favorite subject, she shines in all her classes and her "attention to detail, quick wit and strong work ethic are second to none," said Susan Keelen, Caldwell's AP statistics teacher.

Caldwell also attributes the success she's seen throughout high school to the help and support her parents and teachers have given her these past four years.

"My parents have done a lot for me and all my teachers have been super supportive," Caldwell said. "My literature teachers always seem to be the ones who attach to me the most, but that could very well be because I love literature. My band director has also always done a great job pushing me to be the best person I can be."

Caldwell plays the clarinet in the Northwest Whitfield marching band. Her musical talent has placed her in the Lee University Honor Band twice and she has already been accepted to the university for fall 2021. Her plan is to major in psychology at Lee, and has future goals of applying to graduate school at Emory University.

Both seniors have demonstrated outstanding success during their high school careers. According to a spokesperson for NMSC, “These students represent a valuable national resource; recognizing their accomplishments, as well as the key role their schools play in their academic development, is vital to the advancement of educational excellence in our nation. We hope that this recognition will help broaden their educational opportunities and encourage them as they continue their pursuit of academic success."