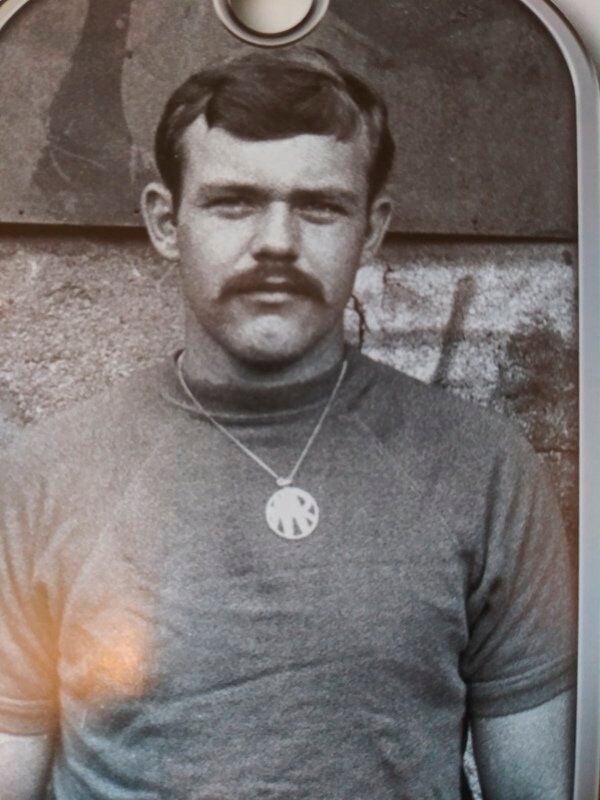 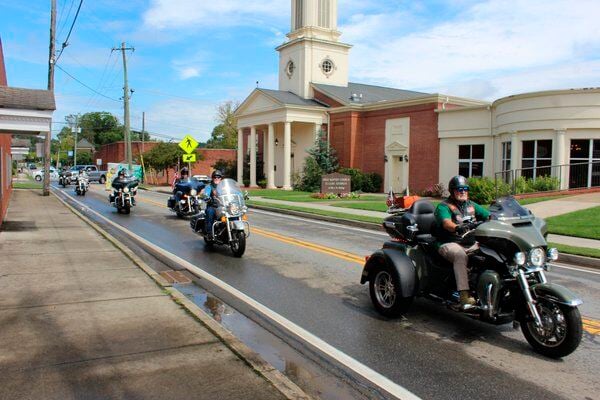 Following his memorial service at Ellijay First Baptist Church, Ron Gravett is escorted by members of the Special Operations Association Riders, a motorcycle group he was a part of and loved dearly, to Georgia National Cemetery in Canton on his final ride.

Following his memorial service at Ellijay First Baptist Church, Ron Gravett is escorted by members of the Special Operations Association Riders, a motorcycle group he was a part of and loved dearly, to Georgia National Cemetery in Canton on his final ride.

While serving in Vietnam, Ron Gravett was awarded a Bronze Star with Valor for potentially saving the lives of several of his fellow soldiers during a special operations mission. Decades later, after he and wife Vickie arrived in Ellijay, he helped save even more lives by becoming involved in the Veterans Court program that helps keep ex-service members substance-free and out of prison.

Also a Purple Heart recipient, Ron, 73, died of COVID-19 earlier this month. A contingent of the Special Operations Association Riders — a motorcycle group he was a part of and loved dearly — escorted him on his final ride last week to Georgia National Cemetery in Canton after his funeral at Ellijay First Baptist Church.

“He was still a very strong, vibrant man,” Vickie said, noting Ron was a Green Beret assigned to the 5th Special Forces in Vietnam. “He had a triple bypass at 47, but no real issues since then, and he had recovered from Achilles tendon surgery earlier this year; he had no physical limitations whatsoever. He went to the hospital on Aug. 13 and stayed three weeks, and died on Sept. 3 after spending 17 days on a ventilator.”

The Gravetts enjoyed singing in the choir at First Baptist, and also performed in the Gilmer County Community Choir during the latter time of their 29-year marriage. Vickie said Ron's memorial service on Sept. 22 and trip to Canton were special.

“Their practice is if they ever lose a member, they travel to wherever that member is being put to rest and take him on his final ride,” she said of the special ops veterans who also served as pallbearers.

Edward Lacey, Ellijay's police chief, first got to know Ron when Ron and Vickie started coming to church at First Baptist many years ago.

“He was the quiet guy singing in our choir, a gentle soul and jovial man, a 'hadn't met a stranger, nobody he didn't like' kind of guy,” Lacey said. “I was reading a book called 'SOG (Special Operations Group) Silent Warriors' … (about) the studies and operations group that was being run in Cambodia and Laos to clandestinely track troop movements and everything in Vietnam.”

Gravett's name was mentioned in one harrowing evacuation story during a battle, and when Lacey asked if it was him, Ron asked which book he was reading since he is mentioned in several. Later, Lacey saw Ron's citation for the Bronze Star with Valor — which Lacey felt should have been upgraded to a Silver Star. In 1962, Ron's group was exfiltrating a recon team. He was the one who protected the rear guard and single-handedly held enemy troops at bay so the helicopters could fly out, according to the commendation.

“One helicopter couldn't take off because it was too heavily laden (with troops), and Ron jumped off to lighten the load so his team could get away from that hot LZ (landing zone); he waited for another helicopter,” Lacey said. “He is a true, unsung hero.”

Ron's medal commendation noted that when his unit came under concerted attack and was flanked on two sides and in danger of being overrun, he “left his partially-concealed position and moved through the fierce wall of enemy fire … and gave his team time to set up a strong perimeter on the nearby landing zone.”

Vickie noted Ron was “rarely in Vietnam itself when he was on a mission — most of his missions were in Cambodia and Laos, which was only recently declassified. They couldn't talk about them for a long time.”

“Our unit, a Special Operations Group, was outside the normal military chain of command,” he said. “We did recon(naissance) missions into Cambodia, Laos and the DMZ (demilitarized zone). Ron became the leader of another team with three American troops and the rest were indigenous. As leader, he carried all the weight and made the decisions.”

Sker said when a new man came into the unit who didn't know anyone, Ron knocked on the door of his "hooch" (quarters) and said, “C'mon, I'll help you get everything you need (gear).”

“That's the type of guy he was, he just went out of his way to do things that had to be done, but short-circuit things to make it quicker and easier for anyone around him,” he continued. “Ron was a gentle and tough-love team leader, but he didn't quit. He would get people to do things through incentive, do it himself (by example), then show other people how to do it. If they didn't do it, then he'd get 'tough love' with them.”

At a Special Operations Group reunion, Ron told Sker he was “proud not of what he had done, but of the accomplishments of the participants in Veterans Court.”

“He was saddened by their lapses, but it stiffened his resolve to better help them,” Sker recalled. “He didn't share specifics and said there were some downsides, but it was very rewarding work.”

Ron began volunteering with Veterans Court in the Appalachian Judicial Circuit in 2014. It became a paid position when he started managing cases, and he retired from doing that in 2019. Still, he didn't quit influencing the participants, and went back to volunteering as a mentor.

Chris Holt is coordinator of the Appalachian Drug Court programs.

“(Ron would) take a Veterans Court participant under his wing and give them some direction,” Holt said. “Ron was one of the first to come aboard as a mentor soon after the program — one of the first Veterans Courts in the nation — began in 2013 ... for many of the veteran participants there was an instant connection, especially the combat guys. They gravitated toward him.

"One thing Ron liked to do was tell his stories, and they were interesting. You're talking about a Special Forces guy who was in 'studies and observation group' in Vietnam, that's just Secret Squirrel and as high-speed as you get in that era.

“Even the non-combat guys — he just had a connection with veterans … Ron became the most faithful guy with the program as far as longevity.”

Kevin Bearmann is a nine-year Navy veteran who struggled with substance abuse.

“Ron was a very, very, very dedicated man to making sure all the participants he mentored made it through the program,” he praised. “He was a very calming man. A lot of people have anxiety, but he was reasonable, ethical and pleasant to be around. A lot of times when I'd go visit him we'd just talk about military service. I know he was like a true Rambo in Vietnam, the real deal. He'd seen a lot and been through a lot, and he had a lot of wisdom about him.”

Bearmann said his relationship with Ron gave him “a whole different outlook on life.”

“He always provided different ways to look at situations and problems, to always find a good side in them,” he pointed out. “He was always there if you needed to talk. A lot of times I'd meet him and we'd have coffee. There was never a time that he didn't have time to talk to somebody, which is kinda important for the program that we're in. He was supportive, and always reassuring me I was doing the next right thing.”

Lacey said although he looks up to Ron as “one of my heroes, he should be best known as a Christian.”

“In reading about his soldier's story, I know Ron overcame a great many battles in his life — and not just the physical battles of wartime,” he said. “What he would tell everyone is that it was through the power of faith in Christ that enabled him to be a victor, even a victor over death itself.”

As for the Gravett family, Vickie said, “We'll do the best we can.”

“It's going to be hard to be without him, but I wouldn't want him to suffer anymore than he had to,” she said. “In his heart, he was always a soldier. He was a pretty special guy, and I'm gonna miss him.”