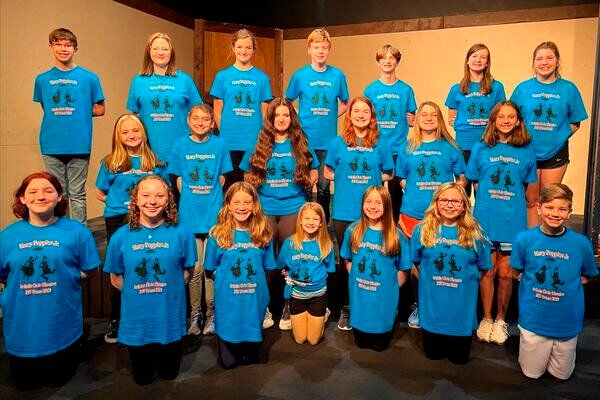 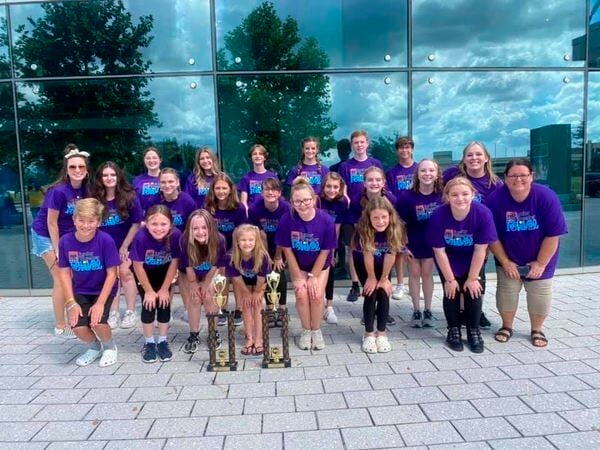 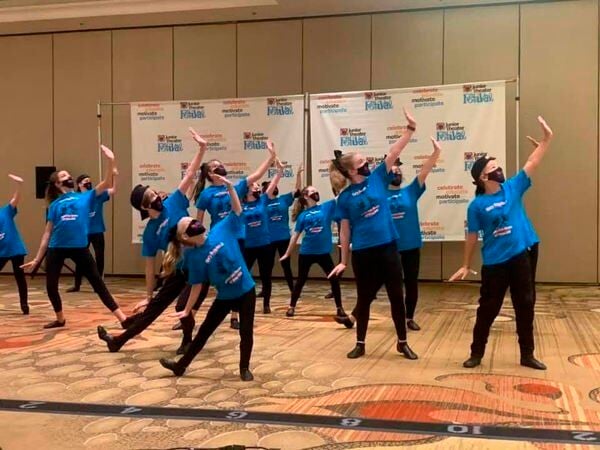 The cast of "Mary Poppins Jr." performs their adjudication piece.

The cast of "Mary Poppins Jr." performs their adjudication piece.

The team was an auditioned competition team of 20 local actors ranging in age from 9 to 17 and representing schools from Whitfield County, Dalton and Christian Heritage.

The students performed a 15-minute version of Disney and Cameron MacIntosh’s musical "Mary Poppins Jr." for adjudication by qualified judges, all of whom work professionally on Broadway.

The Junior Theatre Festival was created and is hosted by Timothy Allen McDonald, the head of iTheatrics and an award- winning Broadway playwright, musical adaptor and director. He believes all children should have access to musical theater and through his many connections in the industry has created a theatrical experience for kids ages 8-18 that is matched by no other.

Many Broadway stars appear on the JTF stage, and all workshops are conducted by industry professionals.

This year, the students attended a dance workshop led by Brion Watson from the company of "Hamilton." They also saw a live recording of the podcast “Growing Up Broadway,” featuring actors from the casts of “Mean Girls,” “Hamilton,” “Groundhog Day,” “Hairspray” and “The Book of Mormon.”

The festival closed with a wonderful concert by Michael James Scott from the cast of numerous shows on Broadway and London’s West End, but who is best known for his role as The Genie in Broadway’s “Aladdin.”

Getting accepted to the Junior Theatre Festival is difficult, and once there the competition is fierce. This year the festival was attended by nearly 50 community theaters, performing arts academies and conservatories from across the United States.

“Our small community theater was up against groups like Inspiration Stage from Sugar Land, Texas, which is a very established and well-respected theater company. They have even been asked to pilot new Jr. shows in the past by Music Theatre International because their talent level is well known to the industry,” said music director Heidi Long. “But I knew we had the talent pool here to go head to head with any group. I was confident we could compete.”

Barnett agreed. Having taken groups from North Whitfield Middle School (where she is the drama teacher) to JTF Atlanta, she was the driving force in creating this experience for the ACT2 JTF team.

Barnett said, “The past year was very difficult for all the students in our area, but I know our theater students felt the loss of their school year and their hobby in a very big way. While sports teams were able to pick back up fairly quickly at the start of the school year, due to COVID precautions our performing arts students were left with next to nothing. I knew that our kids were ready to get back to it, and this opportunity seemed like a great fit for us!

"The real heroes of this story are the parents who agreed to this crazy dream of mine and dropped everything to take their kids halfway across the country to perform and learn alongside the best of the best in youth theater.

"I couldn’t have been prouder of our ACT2 troupe. They were complimented on their behavior, teamwork and positive attitudes everywhere we went. They represented the Dalton area with excellence.”

And not only did they compete, but they won two awards: the Freddie G Award for Excellence in Music and a Tech Olympics award.

Holland was especially proud of the Tech Olympics award because “the judges said our kids were especially recognized for the teamwork they displayed. We were very proud of them.”

The Tech Olympics involves a small group of four who must work together to perform a costume change, an element of set design and a prop setup. Nick McClure, Blakely Nix, Preston Nix and Marley Kilgore volunteered to represent the group and brought home the trophy.

Lynsey Bethel, president of the ACT board of directors, said the board members were “thrilled but not surprised that our troupe made such a great showing at their first JTF. We wanted our kids back on stage learning from professionals and having a great experience. It was a success!”

“It was so exciting to feel like we were part of the professional musical theater world at JTF," said Morgan Long, a Northwest Whitfield High School student who played the role of The Bird Lady. "And to hear so many of those professionals talk about their own JTF experiences made it seem like a dream of performing on Broadway isn’t really so out of reach.”

The young actors all agreed that it was the experience of a lifetime, and the directors all agree that “We hope to go to JTF Atlanta in January of 2023.”

If you’d like to see these amazing young actors perform not only the award-winning adjudication piece from JTF but also other musical numbers, you’ll get your opportunity on Saturday, Aug. 21, at 7:30 p.m. They’ll be performing one show only at Crosspointe church in Dalton. Tickets will be $10 at the door (no advance sales). Cash or checks only will be accepted. Masks are recommended for unvaccinated audience members, but will not be required.

For information on other shows and events coming up at the Artistic Civic Theatre, visit actdalton.org.