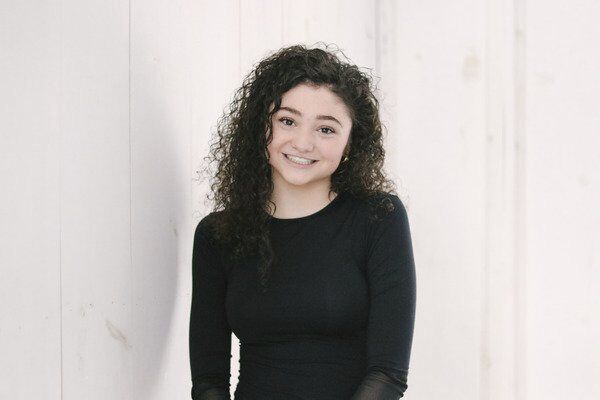 Among a host of other accolades, Emily Allen was president of Southeast Whitfield High School's class of 2020, a position that was "so special and really meant a lot to me," she said. 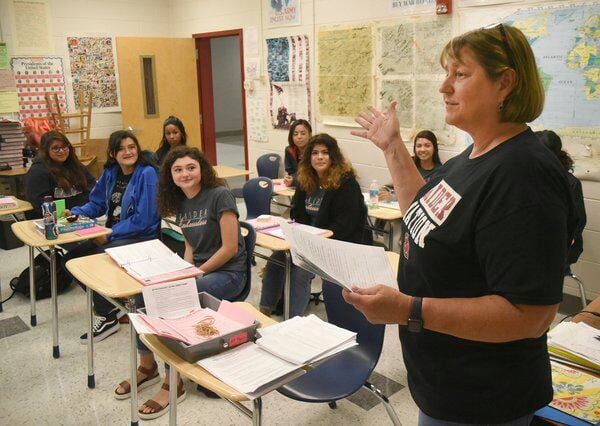 Southeast Whitfield High School teacher Debby Barto, standing, sets high standards, which Emily Allen, seated front row, third from left, devoted herself to meeting, the class of 2020 member recalled. Barto "expected us to rise to those expectations, and I'm a person who has to meet those; it's not OK if I don't."

Among a host of other accolades, Emily Allen was president of Southeast Whitfield High School's class of 2020, a position that was "so special and really meant a lot to me," she said.

Southeast Whitfield High School teacher Debby Barto, standing, sets high standards, which Emily Allen, seated front row, third from left, devoted herself to meeting, the class of 2020 member recalled. Barto "expected us to rise to those expectations, and I'm a person who has to meet those; it's not OK if I don't."

Emily Allen, a member of Southeast Whitfield High School's class of 2020, earned numerous honors during her time at the school, but it was the impact her classmates had on her that stands out in her memories beyond anything else.

Her classmates "are amazing people, so kind in everything they do," despite, for many, trying circumstances, she said. "I know they're often exhausted, but they're so kind."

Allen will always "miss the honesty of Southeast, (where) there were no walls up, and we had a family since freshman year," she said. Southeast's teachers and students "are genuine and authentic, and the heart there is amazing."

Without the "support system" of Southeast — particularly the Raider Ambassadors, of which she was a part her junior and senior years — Allen couldn't have been named a 2020 Georgia Scholar by the Governor's Office of Student Achievement, she said. She took on leadership roles, including planning a charity run, and she acted as a liaison between students and teachers, which sharpened her communication skills.

"There are so many great memories when I look back on it," she said. "It taught me a lot about the long haul and how you have to really stick with it."

Through the Georgia Scholar program, the Georgia Department of Education identifies and honors high school seniors who have achieved excellence in school and in their community, according to the department. Seniors who are eligible demonstrate preeminence in every phase of their lives, from school to community.

"Southeast has changed me in ways I can't even describe," Allen said. Even classes she struggled with at the time proved formative.

For example, an economic and government course freshman year with a "very strict" teacher and challenging material initially had Allen thinking, "Oh my goodness," but it helped enhance her work ethic, she said. "It caused me some stress, but it taught me about discipline, as well."

Comparing herself to others, and vice versa, is actually "a pet peeve" of Allen's, she said. All that matters to her is "we try our best."

Allen "is truly collaborative, and she is a perfectionist in terms of process, not results," Matt Hickman, a math teacher at Southeast, explained last year. She is "a fantastic student, but an even better person."

Hickman is one of the teachers who has served as an example to Allen.

"He really goes above and beyond, which has been inspiring to me," she said. "He stayed after school on SAT prep (to help me), and he's amazing."

Acclaim in and out of the classroom

Trying her best clearly produced results for Allen. She was senior class president, president of her school's DECA chapter, an AP (Advanced Placement) scholar and a member of the Key Club, National Honor Society and Raider Ambassadors Service Committee. She also volunteered with numerous charities, as well as fundraising efforts for elementary literacy access, food drives and clothing collections.

Allen's efforts did not gone unnoticed. For example, she received Georgia United Foundation's Geraldine Tilson Scholarship for $7,500. Recipients were selected based on a one-minute creative video submission describing how they will use their education to help their community, according to Georgia United Foundation. Additional consideration was given to academic accomplishments, leadership and participation in school and community activities.

Allen learned about the scholarship through DECA, an organization of which she was a member all four years of high school, and she decided to focus on communication for her video, she said. She had plenty of assistance in composing the video, so "I couldn't have done it without the support of my school," and the video "was very true to me."

"I learned a lot about myself, my views, and what I care about" through the process, she added. "I'm extremely blessed and honored" to receive that scholarship.

Allen also received a $1,000 Student of Integrity scholarship from the Better Business Bureau for 2020.

More than 100 students applied for scholarships that year, with only 10 receiving them, and the competition was available to all high school seniors in the BBB service area of 21 surrounding counties in southeast Tennessee and northwest Georgia, according to the BBB. Students wrote an essay on “the importance of ethics in business and our community.”

Allen also received scholarships from other sources, from the Whitfield-Murray Historical Society to her dance studio to the University of Georgia, where she's now a student. At Georgia, Allen is focused on studying communications, journalism, public relations and dance.

In college, "I'm looking forward to having my own time," she said this summer. Because Allen was involved in so many pursuits at Southeast and in the community, "I felt I was rushing a lot from one thing to the next to the next."

Allen was named a STAR (Student Teacher Achievement Recognition) student for 2019-20 in the program sponsored by the Professional Association of Georgia Educators (PAGE) and the PAGE Foundation. High school seniors must have the highest score on a single test date on the SAT and be in the top 10% or top 10 students of their class based on grade point average to qualify for a STAR nomination.

Debby Barto, who taught Allen and is an adviser for Raider Ambassadors, sets high standards, which Allen devoted herself to meeting, Allen recalled. She "expected us to rise to those expectations, and I'm a person who has to meet those; it's not OK if I don't."

Allen "is an amazing young lady, very well rounded and accomplished, (who) always strives to do her best work academically and has a true love of learning," Barto said. "She is humble, compassionate and truly concerned with the well-being" of others.

"She is greatly respected and liked by her peers," voted as the most outstanding Raider Ambassador both her junior and senior years, as well as the Homecoming queen, Barto said. "Emily is quick to compliment, encourage and show respect to others."

Barto also was responsible for Allen seeking to be senior class president, Allen said. That position was "so special and really meant a lot to me."

Allen "shows a maturity and self-awareness that is rare among people her age," Barto said. "Her cheerful attitude and can-do spirit is contagious, and she brings a positive attitude to every situation she encounters."

Emily J. Hayes 75, of Rocky Face passed away Thursday January 21, 2021 at her residence. She was the daughter of the late, Dan and Naomi McDaniel and was preceded in death by her three sisters. Emily is survived by her loving husband Jacky Hayes of the residence; daughter and son-in-law, Mic…