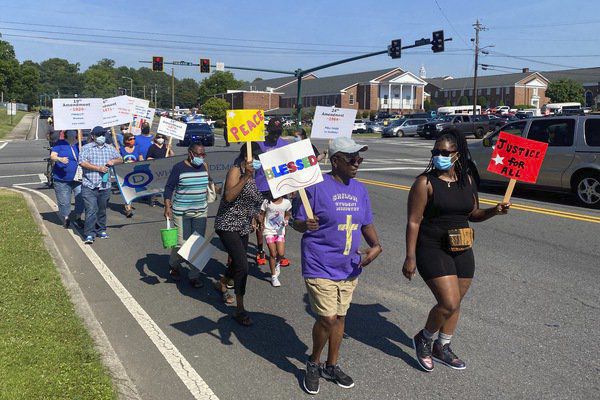 People walk Saturday in a parade on Thornton Avenue during Dalton's second annual Juneteenth Celebration, which was organized by the local NAACP. 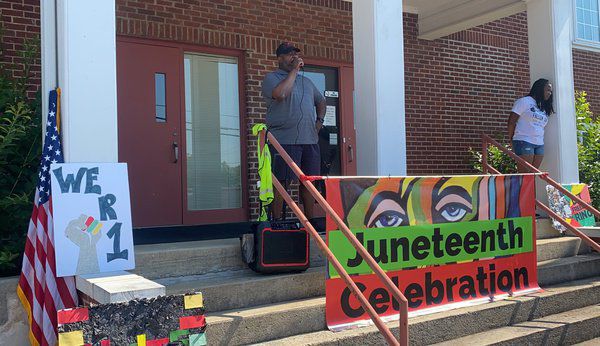 People walk Saturday in a parade on Thornton Avenue during Dalton's second annual Juneteenth Celebration, which was organized by the local NAACP.

On Jan. 1, 1863, President Abraham Lincoln issued the Emancipation Proclamation which declared "that all persons held as slaves" in states that seceded from the United States "are, and henceforward shall be free." Despite Lincoln's order, it took some two and one half years for word to reach the remote state of Texas.

"It was a delayed justice, and I'm saying that to us today, let us not continue to delay justice," Rod Weaver, Whitfield County Magistrate Court judge, said on Saturday during Dalton's second annual Juneteenth Celebration. "How can we not do that? Vote. That's how we can choose our elected officials and govern ourselves. Vote. Another way is that we can reach across the aisle and that's exactly what we've done here today. We've got different races. Get to know other cultures. Get to know their experiences and their history. In doing so, we realize that we are all alike. And we are as one."

Juneteenth, also known as Freedom Day, is the holiday commemorating the day in 1865 when the final enslaved Black people learned they had been freed. On June 19, 1865, Gen. Gordon Granger read General Order No. 3 from the balcony of a building in Galveston, Texas, freeing more than 250,000 slaves who had remained in bondage there. The next year, former slaves in Texas began celebrating June 19 in what would be known as Juneteenth. It is now either an official state holiday or day of observance in 47 states and the District of Columbia. There is a push to make Juneteenth a federal holiday.

For the second straight year, the Whitfield County Chapter of the NAACP organized the local Juneteenth Celebration. This year's event on Saturday morning was scaled back due to the new coronavirus (COVID-19) pandemic, but about 200 people turned out to participate in a parade through downtown Dalton that celebrated freedom.

The parade began at the First Baptist Church of Dalton, then headed east on Waugh Street before turning south on Pentz Street through downtown. The parade had a celebratory tone as attendees carried signs that read "We are one," "Happy Freedom Day," "Justice for all" and, succinctly, "Unity." Many waved to others along the parade route, while several local churches had cars, trucks and buses in the procession.

The parade's terminus — which was fitting — was the steps of The Emery Center, an African American heritage cultural center. The Emery Center was formerly Emery Street School, which served black students in Dalton from 1886-1968 before Dalton Public Schools were integrated in 1968.

There, speakers urged attendees to be involved in the community, and continued the theme of unity. Whitfield County NAACP President Michael Kelley called on local religious leaders of all races — white, Black, Hispanic — to form a pastoral council to help move the community forward, saying such a group "would be a phenomenal thing."

Windell L. Smith, senior pastor at Hopewell Baptist Church and president of Concerned Clergy of Greater Whitfield County, spoke about the meaning of the day and remarked how special it was to have such a gathering "because there was a time when we couldn't assemble like we assemble today."

"We pray God that we are able to continue to stand, to stand as one people, to stand on your agenda," Smith said. You have given this to us, and God, we thank you Lord for that in your word you demand justice."