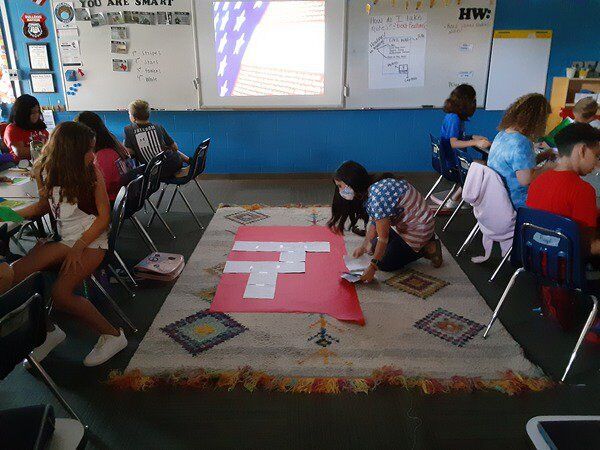 Shan Plsek, a fifth-grade teacher at New Hope Elementary School, begins arranging a Sept.11 collaboration poster in her classroom Friday while students work on additional components of the artwork and a video about 9/11 plays. 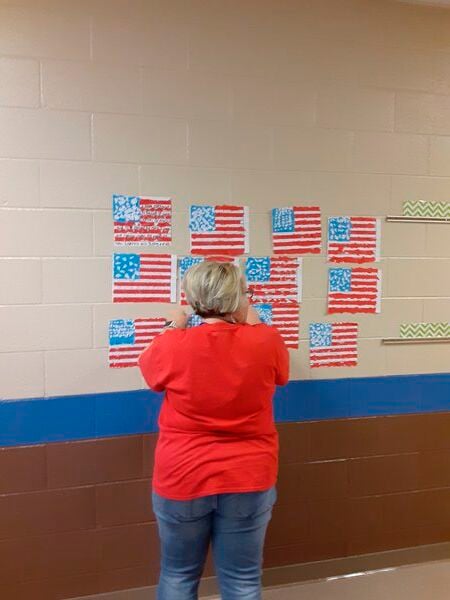 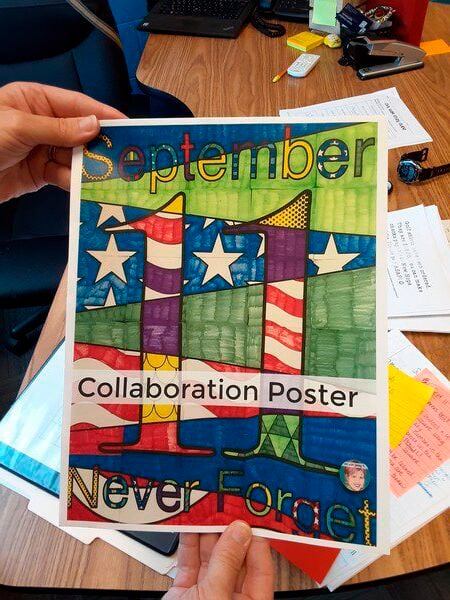 Shan Plsek, a fifth-grade teacher at New Hope Elementary School, begins arranging a Sept.11 collaboration poster in her classroom Friday while students work on additional components of the artwork and a video about 9/11 plays.

Though the terrorist attacks of Sept. 11, 2001, occurred before most if not all current Dalton Public Schools and Whitfield County Schools students were born, both systems made sure those tragic events aren't forgotten.

"It's weird, because they weren't even born, but to me it feels like it happened yesterday," said Tara Henson, a fourth-grade teacher at New Hope Elementary School. "I remember exactly where I was, what everybody said and did," etc.

At New Hope, staff members were encouraged to wear red, white and blue Friday, and fourth-graders did art projects and watched videos as part of the 9/11 dialogue, said principal Carla Maret. While fourth-grade projects were more individual, fifth-graders completed individual sections to be part of complete wholes.

Each fifth-grader colored a "square" to be a piece of a "collaborative poster," said fifth-grade teacher Shan Plsek. "It's important for them to (understand) what happened (that day), because it's a very real part of history, and it's still going on" in many ways, but also to focus on the response of Americans in the following days.

It's critical to commemorate 9/11 because "thousands died, and it's very sad," said fifth-grader Emerson Crossen. "Everyone who died, this is for them."

Classmate Will Stanton said he liked the art project. "It's colorful," he said.

"We have to bring (9/11) to their attention, because it's a real piece of history," said Maret. "By keeping it alive, we'll never forget."

New Hope's fourth-graders drew and colored "symbols of America" -- bald eagles, American flags, the Statue of Liberty and the White House, as well as watching videos, reading books and discussing 9/11, said fourth-grade teacher Kendra Ballew. Though her students weren't alive in 2001, "you hear them talk about it, because they've seen and heard a lot about it."

Indeed, "I was surprised how much they knew," seconded Henson, who also urged her students to seek additional 9/11 content on their own if they wished because of how "important it is to" history. "There's so much they can watch and read."

In Dalton Public Schools, elementary and middle school students and staff were encouraged to wear red, white and blue Friday, according to Pat Holloway, the system's chief of staff. Several schools had grade-specific activities to discuss 9/11, as well.

For example, at Park Creek School, fifth-graders annotated the poem, "I Hold in My Hands," which was written by then-sixth-grader Aaron Walsh on Sept. 11, 2001, watched an educational video and did a read-aloud connected to 9/11, according to Will Esters, Park Creek's principal. The events of 9/11, their impact and their aftermath, were also the social studies standard for the week for the school's fifth-graders.

Park Creek's third-graders also did a read aloud, watched a video and had discussions and quick-writes connected to 9/11, Esters said. The first-grade virtual curriculum included a 9/11-related video and a read-aloud of "The Man Who Walked Between the Towers," a children's picture book that details the 1974 tightrope walk between the twin towers of Philippe Petit.