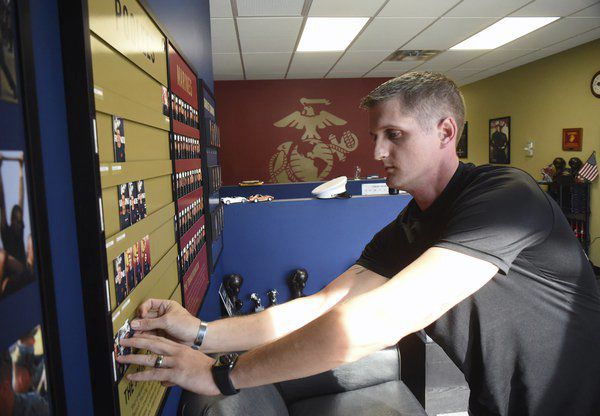 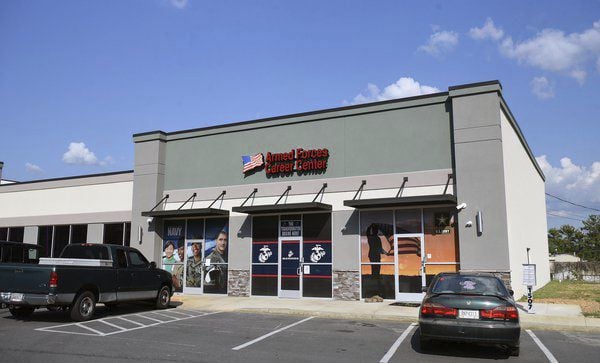 The local Armed Forces Career Center has moved from the Dalton Mall to this location off West Walnut Avenue.

The local Armed Forces Career Center has moved from the Dalton Mall to this location off West Walnut Avenue.

Since moving into a new spot last month off Walnut Avenue near Planet Fitness from its former location in the Dalton Mall, the Armed Forces Career Center has seen an increase in foot traffic, as well as enjoying more scheduling flexibility, according to recruiters for the U.S. Army and Marine Corps.

Shawn Glaze, a sergeant in the Army who has been a recruiter for the past four years, publicized the move on his social media feeds for several months before the actual relocation on Aug. 3 so “people know we’ve moved,” he said. And, because the nearby Planet Fitness gym is open 24 hours, potential recruits see the new location day or night, which is "a great benefit,” he added.

“The mall had peak hours of about 6 p.m. to closing time (9 p.m.)” and “we were kind of on the mall’s time,” said Glaze, who has been in the Army for a decade. Now, however, Glaze lives only five minutes from the new location, which also has space for the U.S. Navy and the aforementioned Marines, so “I can be here in five minutes if somebody calls.”

In addition to Glaze’s social media posts, “we’ve gone to all the local schools to let them know we’ve moved,” said Logan Orr, station commander and a gunnery sergeant for the Marines. “We knew we were going to move” from the mall for roughly a year, but the exact location remained undetermined until earlier this summer.

Orr is typically at the new office by 7:30 a.m., but his hours are flexible to fit schedules of those who want to meet with him.'

Recruiting can be "a challenge,” especially because “the Marine Corps is not for everyone,” said Orr, who is originally from Johnson City, Tennessee, but has been in Dalton roughly 18 months. Consequently, it’s paramount those considering the Marines “explore all options.”

Orr certainly did that, checking with each service branch before ultimately opting for the Marines, who won out in part due to “professionalism” as well as a willingness to spend time with him, he said.

“They wanted to sit down, find out who I was, and (tell me) how the Marines could help me be successful," Orr said.

Orr had designs on a college football scholarship, but when that dream failed to materialize, he tried menial jobs before realizing he desired a more fulfilling profession, he said.

“I was looking for a challenge and a pride of belonging,” a feeling of teamwork and brotherhood he’d enjoyed through sports, he said.

Orr is joined in his Dalton office by two other recruiters, and he has a “satellite office” in Blue Ridge, he said. “We try to show how the Marine Corps can amplify ambitions and goals people have.” he said.

For example, “it’s not just infantry,” said Orr, who joined the Marines a decade ago shortly after he graduated high school. “Infantry is only 10% of the Marine Corps.”

Recruits can enlist as young as age 17 — with parental permission — and they have to be no older than 29 on the day they report to basic training, he said. “People (enlist) for a variety of reasons.”

In addition to the recruitment office, local students may be introduced to the Army through the Warrior Athlete Challenge, Glaze said. Glaze and others go around to local high schools to train athletes, starting in the summer with football camps.

Glaze, a native of Dallas, was staring at $15,000 in student debt from the University of North Texas with “no idea how to pay for it” when he spoke to an Army recruiter. The Army paid off his debt, and he’s currently working on his business degree through the post-9/11 GI Bill.

Indeed, college benefits are the top attraction for recruits to the armed forces, Orr said. The majority of recruits, at least in Orr’s experience, are between the ages of 17-21.

Both Glaze and Orr emphasized they leave the ultimate decision up to recruits, never badgering them.

“We do not get paid commission; we put out information, but it’s their decision,” Glaze said. “If you want to do it, we help facilitate that.”

In the Army, “you can pick your job before you sign the contract,” and “nine times out of 10, we can line up a job that relates to” a recruit’s field of interest, Glaze added. “It doesn’t have to be combat jobs.”

Glaze and his fellow recruiters are thrilled with their recruiting so far in 2019, he said. “This has been the best year Dalton has ever had for the Army.”

Deborah "Debbie" McKee, age 64, of Chatsworth passed away Tuesday, May 26, 2020. Debbie is preceded in death by her parents, Henry and Ida Adams: brother, John Adams; daughter, Tabatha McKee. She is survived by her loving husband of 39 years Terry Mckee of Chatsworth: children, Glenn McKee o…