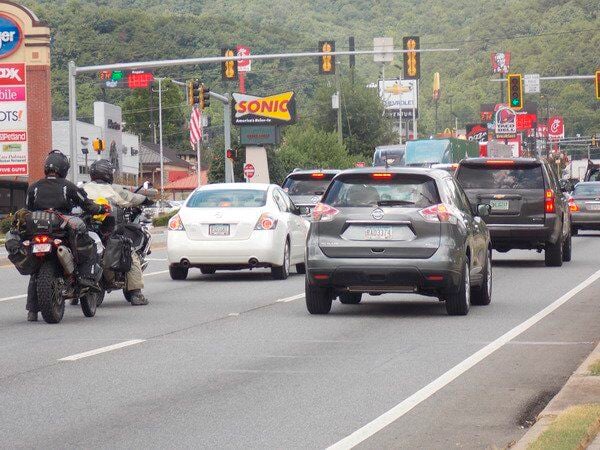 This is a map of traffic accident "hot spots" on Walnut Avenue for July 20-27. "As you can see, the hot spots for crashes on Walnut Avenue were the area around the entrance to Kroger, West Lakeshore Drive and McGee Drive," Dalton Assistant Police Chief Chris Crossen said.

This is a map of traffic accident "hot spots" on Walnut Avenue for July 20-27. "As you can see, the hot spots for crashes on Walnut Avenue were the area around the entrance to Kroger, West Lakeshore Drive and McGee Drive," Dalton Assistant Police Chief Chris Crossen said.

Dalton Police Chief Cliff Cason told members of the city's Public Safety Commission on Tuesday that the police department responded to a call of a possible explosive device in June. Cason said that while cleaning a unit, management of a local apartment complex found a cellphone that appeared to the management to be fashioned into an explosive device.

"It turned out just to be some phone accessories and charging equipment," Cason said. "We are blessed to have an officer who is an EOD (explosive ordnance disposal)-trained professional from the military who was available to come in and determine it was a charger and not a homemade improvised explosive device."

The commission oversees the police department and the Dalton Fire Department.

Cason reported there were 84 traffic crashes in the city in June, down from 94 in May. There were 59 wrecks in April, when Gov. Brian Kemp's shelter-in-place order was in effect.

More than a fifth, 21.4%, of those crashes took place on Walnut Avenue, and more than a quarter of the injuries, 26.7%, occurred there.

"A selective enforcement detail is basically just when patrol sends a number of units to a specific area to perform enforcement on a specific issue such as speed enforcement or distracted driving," Dalton Communications Director Bruce Frazier said Wednesday. "It can be as few as two units, or it can involve more units. It depends on manpower available and what else is happening on that particular day. Typically what you'll see in a speed enforcement detail is one officer positioned either in a patrol unit or on foot spotting speeders with a lidar or radar and then calling out violations to the other officers who then stop the vehicle." A lidar uses light from a laser.

“The Dalton Police Department continually monitors data on crash statistics within the city," Cason said after the commission meeting. "This data gives us a picture of where we have the greatest number of traffic crashes as well as the time of day and driving behaviors that contribute to them. Using this data, we deploy officers to those areas to the best of our ability to address what the data shows."

"I don't have a number to give you for how many vehicles are typically sent to Walnut Avenue on a daily basis because there really isn’t one," Frazier said Wednesday. "It varies. And unless patrol or the traffic unit have set up a selective enforcement detail, it typically is up to the officers after they've been told where the hot spots are and what the trends we're experiencing are in roll call."

"We do break down certain intersections for action if the crashes are happening in the intersection," Assistant Chief Chris Crossen said Wednesday. "A lot of the time, the hot spot areas aren't in the intersections. Some of the time, we are limited to where we can put officers to look for violations because of the characteristics of the roadway. We do not have certain places, times, number of officers that participate in enforcement."

Crossen included a map of the Walnut Avenue area hot spots for the week of July 20-27.

"As you can see, the hot spots for crashes on Walnut Avenue were the area around the entrance to Kroger, West Lakeshore Drive and McGee Drive," he said. "If we have manpower, we will have the shifts conduct traffic enforcement in these areas in an attempt to lower crashes and injuries. There may be days when the shifts are busy or we have hot spots with criminal activity that need attention and there may not be any cars available for selective enforcement of an area. The traffic unit may also put together a detail when they see an area that has a lot of crashes. Again, those details are not necessarily regularly scheduled with a designated amount of manpower. "

Cason said drivers can make sure they are maintaining a safe distance between vehicles by passing an object no less than three to five seconds after the vehicle ahead of them does.

• Fire Chief Todd Pangle told commission members that the fire department handled 295 calls in June, with 184 of those calls (62.37%) rescue or medical calls. Those included 168 calls for medical assistance or to assist emergency medical services, eight calls to automobile wrecks with injuries, seven calls to automobile wrecks that did not result in an injury and one call to remove someone from a vehicle.

The department handled 44 "good intent" calls, such as smoke scares where no fire could be found. It handled 33 false alarms or false calls, where a smoke detector or sprinklers activated but there was no fire. It handled 17 hazardous condition calls. Those included five power lines down and five electrical equipment arcing or shorted calls, as well as two natural gas leaks, one chemical spill or leak and one chemical hazard that did not include a leak.

The fire department handled 10 fire calls in June. That included four vehicle fires, three structural fires, one cooking fire confined to the container, one vegetation fire and one dumpster or trash fire.

It also handled seven service calls, including two animal rescues and two requests for assistance by the police department or other government agency.

• The commission held a moment of silence for Kenneth "Kenny" Willis, who passed away on July 1. Willis had served on the Public Safety Commission since 2008. He was 72.

• The commission swore in Truman Whitfield as its newest member. Whitfield was appointed by the City Council on July 20 to fill the unexpired term of Willis, which ends in December.

Douglas Williamson, 78, of Dalton passed away on Wednesday, August 5, 2020. He was the son of the late Estes and Selma Williamson and was also preceded in death by his brother, Leon Williamson. Doug is survived by his sisters, Lois Cochran of Dalton and Deborah Williamson of Owatonna; niece,…