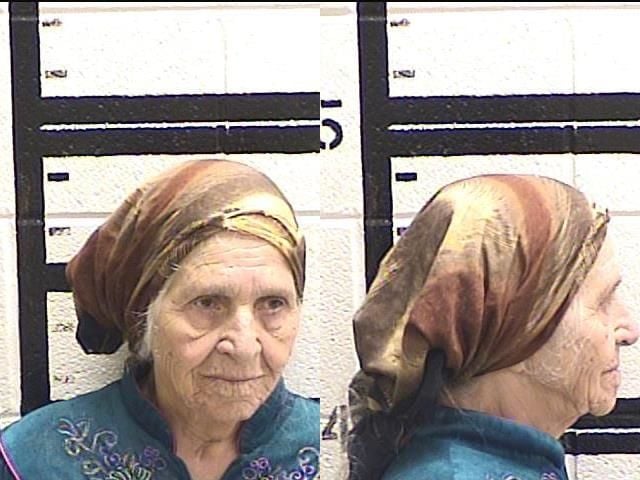 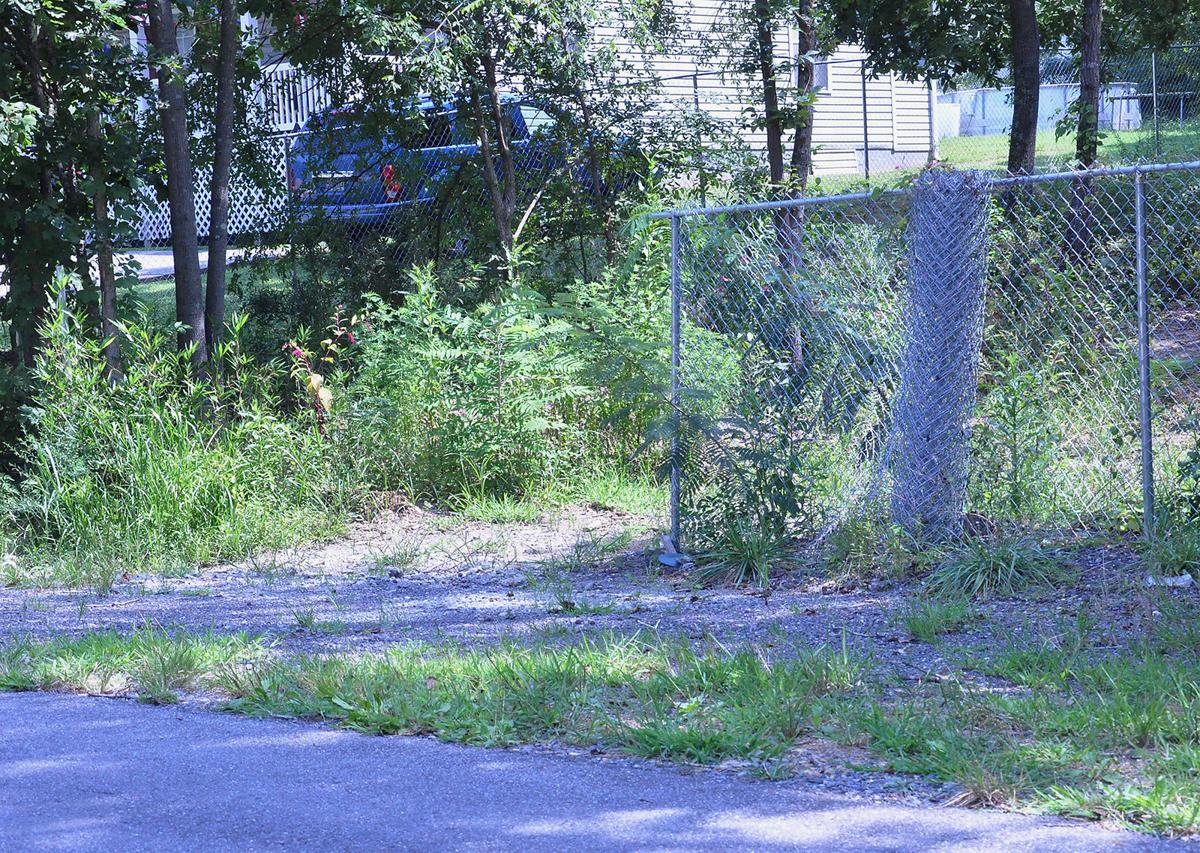 The back of the Boys and Girls Club property in Chatsworth where 87-year-old Martha Al-Bishara was Tased by an officer of the Chatsworth Police Department is shown here. Family members said Al-Bishara was cutting dandelions with a kitchen knife in the heavy vegetation across the street from her house.

The back of the Boys and Girls Club property in Chatsworth where 87-year-old Martha Al-Bishara was Tased by an officer of the Chatsworth Police Department is shown here. Family members said Al-Bishara was cutting dandelions with a kitchen knife in the heavy vegetation across the street from her house.

Then Martha Al-Bishara, 87, can be heard crying out. Taser prongs have hit her left breast and her stomach, according to her family members.

She slowly falls to the ground. Chatsworth Police Chief Josh Etheridge holsters his gun before turning Al-Bishara over and handcuffing her. Eventually, she is brought to her feet while still lightly sobbing and speaking in Arabic.

Etheridge removes the prongs, and Al-Bishara is walked off of the property of the Boys and Girls Club at 502 W. Chestnut St. in Chatsworth to Seventh Avenue. At one point, she walks toward her house, which is nearby, before being stopped by an officer, who tries to speak Spanish to her.

A Chatsworth Police Department officer's bodycam captured these moments on Friday. The footage was reviewed by the Daily Citizen-News, but Etheridge said it will not be released since criminal charges against Al-Bishara are pending.

The footage shows Etheridge and Officer Steven Marshall in a stand down with a woman who is holding a knife, Etheridge with a pistol aimed at the woman and Marshall with a Taser in his hands.

They are pleading with the woman to drop the knife. They can be heard yelling, but the video — from the bodycam of a third responding officer — is from a distance and what the woman is doing with the knife cannot be determined clearly.

Etheridge, who had asked Marshall if he had his Taser with him, according to a police incident report, defended the use of the Taser on Al-Bishara, but her family members said the officers should have shown more patience with her. They said Al-Bishara was on the property cutting dandelions with a kitchen knife.

“There was no anger, there was no malice in this,” Etheridge said. “In my opinion, it was the lowest use of force we could have used to simply stop that threat at the time. And I know everyone is going to say, ‘An 87-year-old woman? How big a threat can she be?’ She still had a knife.”

“I completely understand and if I hadn’t been there and it would come across my desk, that is the first thing I would ask as well," he said. "Why did we Tase an 87-year-old woman? I guess in that circumstance, I am glad I was there and saw it firsthand and understand why it occurred. An 87-year-old woman with a knife still has the ability to hurt an officer.”

He said the goal was to not have to use deadly force. At one point, he took his pocket knife out and threw it on the ground, indicating what he wanted the woman to do with her knife.

"The question's always going to be why did he (the officer) not retreat," Etheridge said. "The thought behind that would be if the officer had retreated, with her being in an elevated position, he could have easily fell down," Etheridge said, "at which time she could have been progressing on top of him and deadly force could have been used at that point in time. And that was the whole goal, to try to avoid using any type of force, but if we have to use force, use the minimum force."

Family members are not convinced. They said the officers should have shown more patience when it became clear Al-Bishara couldn’t understand them.

"If they would have approached her with an open hand rather than with their guns drawn, she would have handed it (the knife) to them right away," said grandson Timothy Douhne. "My grandmother is the most kind, generous-hearted woman."

“You don’t Tase an 87-year-old woman,” said great-nephew Solomon Douhne, a former Dalton Police Department officer. “She was not a threat. If anything, she was confused and didn’t know what was going on. It was a ridiculous turn of events. If three police officers couldn’t handle an 87-year-old woman, you might want to reconsider hanging up your badge.”

Al-Bishara was charged with criminal trespass and obstruction of an officer, both misdemeanors. She was released on her own recognizance after family members said she spent two hours at the Murray County jail. They said she is recovering but is frightful of going outside and has trouble sleeping.

"She is OK," great-granddaughter Martha Douhne said. "She is still repeating the incident over in her mind and telling us she didn’t mean for this to happen and apologizing that she didn’t want to bring this on us. She is having trouble sleeping and is stressed."

According to an incident report and a 911 call, officers were sent to the Boys and Girls Club on Friday at about 4:28 p.m. when an employee called and told an operator, “This lady is walking on the bike trail, she has a knife and she won’t leave. She doesn’t speak English.”

No children were outside when the caller contacted 911.

Etheridge said from the time of the 911 call to the time of Al-Bishara being Tased was less than 10 minutes. The 911 call lasted a little more than three minutes.

“She’s old so she can’t get around too well, but,” the employee said. “Looks like she’s walking around looking for something, like, vegetation to cut down or something. There’s a bag, too.”

When the operator asked if the woman "came at someone with a knife ..." the employee said, “No, she just bringed the knife onto the property in her hand. She didn’t try to attack anybody or anything. We haven't closed in our fence in the back yet and she walked through there."

Marshall was sent to the location and Etheridge responded from the headquarters of the police department on Third Street. Etheridge said he didn’t have a radio on him when he left headquarters and doesn’t know if dispatch relayed to Marshall that there was no immediate threat to children.

There is a partial fence on the Boys and Girls Club property; the fence is not completed on the back side of the property that is adjacent to Seventh Avenue. Al-Bishara and her 96-year-old husband live directly across the opening on the other side of Seventh Avenue.

“She had a small kitchen knife and was cutting dandelions in a lot next to her house,” said Solomon Douhne. “She was not threatening any kids at the Boys and Girls Club."

Al-Bishara’s daughter and granddaughter arrive shortly after the Taser was used, the bodycam footage shows, but emergency medical personnel were not called and none of the officers told family members Al-Bishara had been Tased, the family members said.

Al-Bishara has lived in the area for 22 years and along with her husband became a naturalized citizen in 2001. A neighbor said she was shocked to learn what had happened.

“This woman don’t bother nobody or nothing,” said Elizabeth Usrey, who lives on Seventh Avenue. “They keep their stuff clean and don’t bother anyone. I don’t really know what happened, but the woman wouldn’t hurt a fly. Using a Taser on someone that age is ridiculous.”

Al-Bishara and her husband enjoy walking around the neighborhood, Usrey said, and when they harvest vegetables in their garden on their property they share them with neighbors.

“They (the officers) should have been more patient,” Usrey said.

Etheridge said the police department will conduct an internal “use of force” review and that Marshall remains on duty without any restrictions.

“There will be a full investigation,” Etheridge said. “We handle use of force issues internally, and an outside agency would be contacted if we thought a crime had been committed. If someone wanted to contact the GBI (Georgia Bureau of Investigation) — and we have been in contact with them to let them know what happened — because they think there was criminal wrongdoing, then we would welcome that. We haven’t requested them to come in. We simply don’t believe there was any criminal activity."

The incident report quoted a family member as saying Al-Bishara has dementia, but other family members said that is not the case and the elderly couple "are very independent."

911: Murray 911, what is your emergency?
Caller: Hey, I’m at Boys and Girls Club, I’m on staff here. This lady is walking on the bike trail, she has a knife and she won’t leave. She doesn’t speak English.
911: OK, so you're at the Boys and Girls Club?
Caller: Yes, I work here. (Inaudible) she won’t leave and she has a knife. She doesn't speak English
911: OK, what is the address there?
Caller: I think it’s 502 Chestnut St. I can check real quick to make sure. Yeah, 502 Chestnut St.
911: OK, is she inside the building or is she just outside?
Caller: She’s outside, there’s no kids around though. She just … She told me she doesn’t speak English and keeps walking up the trail with a knife.
911: Is everybody inside the building?
Caller: Yeah, all the kids are.
911: What about everybody else?
Caller: A few staff (inaudible). She’s old so she can’t get around too well, but. Looks like she’s walking around looking for something, like, vegetation to cut down or something. There’s a bag, too.
911: But she came at someone with a knife though, right, or did she just have it?
Caller: No, she just bringed the knife onto the property in her hand. She didn’t try to attack anybody or anything. We haven't closed in our fence in the back yet and she walked through there.
Caller: If you’re able to send anybody, it’s on the side of the property, not the front.
911: Which side is it on?
Caller: If you’re facing Boys and Girls Club it’s on the right down on that next street over. There’s an open fence in the back.
911: OK, so she’s on the right side of the building which is going to be, like, on the south of it, right?
Caller: Yeah, down the street and it’s a fence on the left.
911: What is she wearing?
Caller: A blue dress with a brown Muslim hat-looking thing (inaudible).
911: And what is your name?
Caller: Tanner …
Caller: OK. There is somebody here now.
911: They come back there around where you're at?