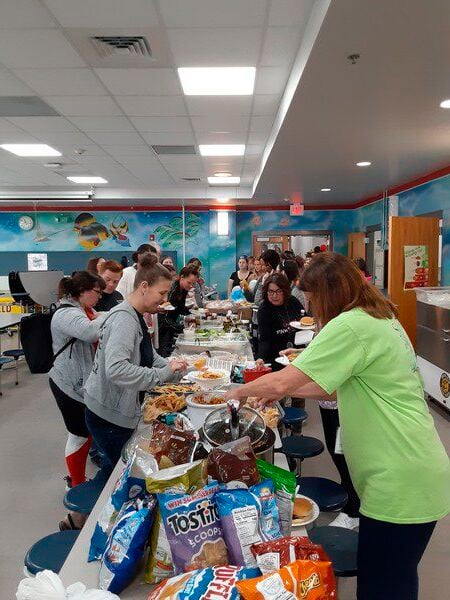 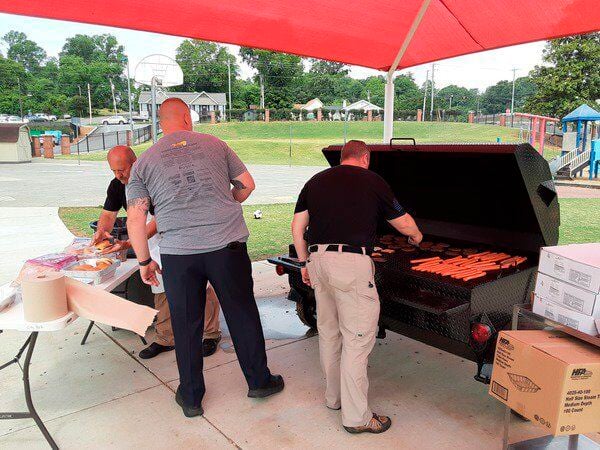 City Park School staff members closed out the 2020-21 school year with a lunch highlighted by hamburgers and hot dogs cooked on-site by members of the Dalton Police Department.

Each year, schools in the Dalton Public Schools system compete to provide the most funds for the annual Shop with a Hero event, and the police department then cooks for the victorious school, said Officer Terry Smith. City Park contributed more than $400, so it received a visit from members of the department Thursday, June 3, and Westwood School — which won the 2019-20 edition of the contest, but couldn't have its luncheon last year due to the COVID-19 pandemic — enjoyed the same favor Friday, June 4.

"I've never been at a school that won (this) before, and I'm so proud of our staff," said Kim Rhyne, City Park's principal. "The staff here is so generous."

"I've never seen people who just give and give and give like they do," Rhyne said. "They put the needs of our students above their own all the time, and this (competition) is such a good cause."

Schools select two students in need — 14 students were able to participate in 2020 — who then shop on a Saturday during the holiday season with Dalton police officers and Dalton firefighters, Smith said. Students also pick up all the trimmings for a holiday meal from Walmart.

"It's everything they need for a special holiday meal," said Cliff Cason, Dalton's chief of police. "Walmart puts those (boxes) together for us so every family gets the same" items.

Students typically place just as many gift items in their shopping carts for family members as they do presents for themselves, Cason said.

"That really says something about how they're being raised and having the right values."

Shop with a Hero is "so worth it," Smith said. "To see the looks on the faces of these children, it's so worthwhile."

"You can tell how appreciative they are and their families," Cason said. "It's one of those things we look forward to every year."

"We love seeing kids do that," Rhyne said. Their faces shine "when they pick up toys they've wanted for so long."

Any surplus funds from Shop with a Hero are used to support Special Olympics Georgia, and "we have lots of special needs (students) in Dalton Public Schools, so it pays to support that, as well," Cason said. "We're pretty excited to do that each year."

The lunch was a rare opportunity for City Park's staff members to sit together and talk, as social distancing and small groups have been emphasized for more than a year due to COVID-19 protocols.

"Teachers are such social creatures, so having to be separated so long has been really tough on them," Rhyne said. "To all be together today, I couldn't ask for a better way to end the year."