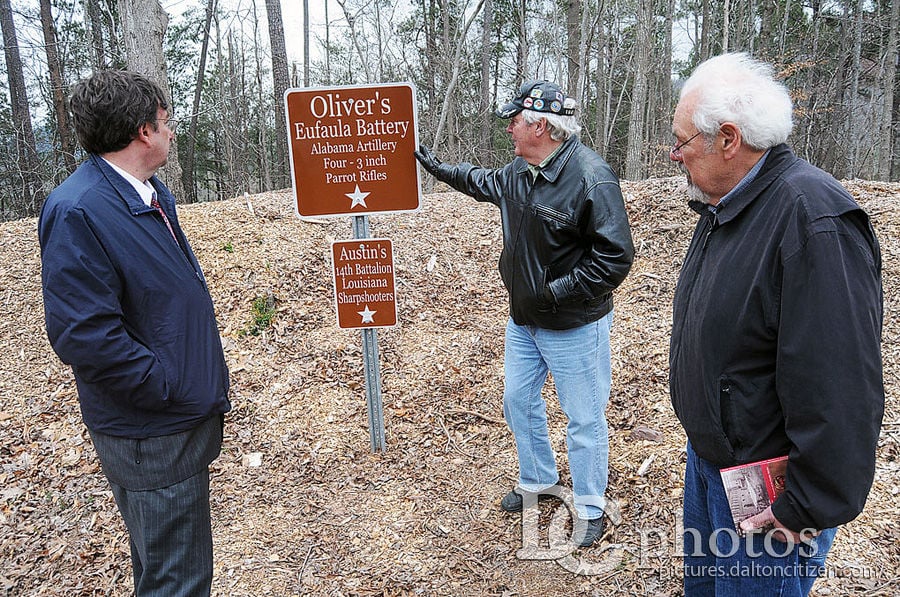 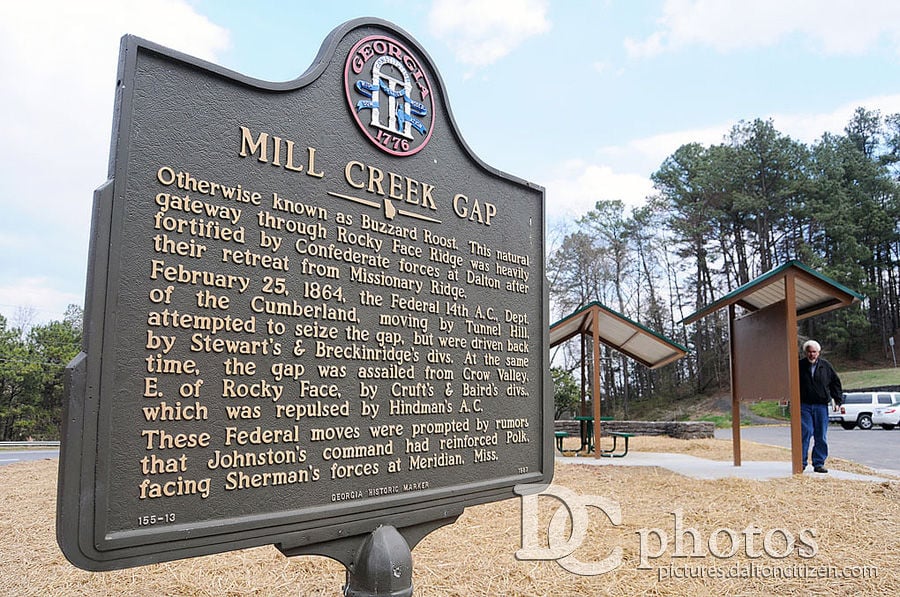 Some 150 years ago, Confederate and Federal troops dug into the mountains and ridges just north of Dalton and lobbed artillery shells at each other across Mill Creek Gap.

On Saturday, some of those Confederate earthwork fortifications will be opened to the public with the 11 a.m. dedication of the Mill Creek Gap Civil War Battlefield Park off U.S. Highway 41 next to the Georgia State Patrol barracks in Rocky Face. The keynote speaker will be historian and author Richard McMurry.

“The park is about four-and-a-half acres,” said Bob Jenkins, president of the group Save the Dalton Battlefields. “It’s the property at the bottom of the hill, where the stone wall is, as well as a strip of wooded land between the barracks and the (Dalton First Church of the Nazarene).”

“He was a Louisianan, and Gibson’s Louisiana Brigade was in command of those earthworks and other earthworks that ran up Buzzard’s Roost,” said Jenkins. “There were four parrott guns there that could reach all the way to Blue Mountain.”

The seeds for the park began about three years ago when Jenkins, Bill Blackman, Kathryn Sellers, Kevin McAuliff, Paul Belk, Jim Burran and Greg Cockburn formed Save the Dalton Battlefields. Jenkins said the members of the group wanted to make sure that what happened in Cobb County didn’t happen here.

“Cobb County probably had more Civil War earthworks at one point, but with the growth of Atlanta spilling into Marietta and beyond they lost that distinction at some point some years ago,” he said. “Whitfield County now has more undisturbed Civil War earthworks than any other place in the nation. They have been preserved over the years because the people that own those properties have known what those earthworks were and kept them from being destroyed.”

Cockburn approached the state about deeding the state patrol property over to the county.

Jenkins said the site of the state patrol barracks was originally a “pocket park” built in the 1930s by the federal Works Progress Administration (WPA), a Great Depression-era program to put unemployed people to work on public projects.

“The WPA built five of those stone-walled pocket parks on U.S. 41. The first was at Ringgold Gap. The second is there at Mill Creek Gap. The third was at Resaca. The fourth was in Cassville, and the final one was at Peachtree Creek,” he said.

Whitfield County Board of Commissioners Chairman Mike Babb praised the work done by the group.

“They really spearheaded this. All the county did was agree to take the property from the state and to put up some signs, and Greg laid out a trail (to the earthworks) that we put in,” he said.

Jenkins said the Community Foundation of Northwest Georgia provided funds to help the group get the site surveyed and to build a fence separating the park from the state patrol barracks. The state patrol still maintains the barracks, the garage and the upper parking lot at the site.

The Mill Creek Gap park is the first of two county parks spearheaded by Save the Dalton Battlefields that will open in the next four weeks. On Saturday, April 26, at 11 a.m. the county will dedicate the Potato Hill Park at 2261 Reed Road. That property was acquired with funding from the Georgia Battlefields Association (GBA) and donated to the county. The keynote speaker will be GBA President Charlie Crawford.

Little Daylin Mason "Superman" Crider, age 8 of Chatsworth, Georgia, departed this life Wednesday November 24, 2021 at the TC Thompson Children's Hospital. He was born August 22, 2013 in Chattanooga, TN. Daylin loved to play in the Miracle League. He was number 4 on the Braves. He is survive…

Mr. Adolfo Morones, age 93 of Dalton, Georgia, departed this life, Saturday November 20, 2021 at his home. He was born October 4, 1928 in Mexico a son of the late Roman and Demitria Chavez Morones. He was also preceded in death by his wife, Betty Sue Guge Morones brothers, Jose, Andres and A…