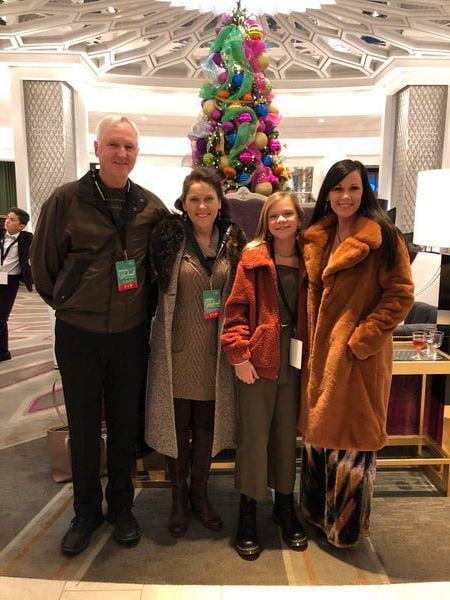 Lori Beth Sikes Eicholtz was joined by her parents, Kerry and Caren Sikes, and daughter, Emery Edgeman, at the premiere of "Christmas at Graceland: Home for the Holidays" Thursday night at Graceland in Memphis, Tennessee. 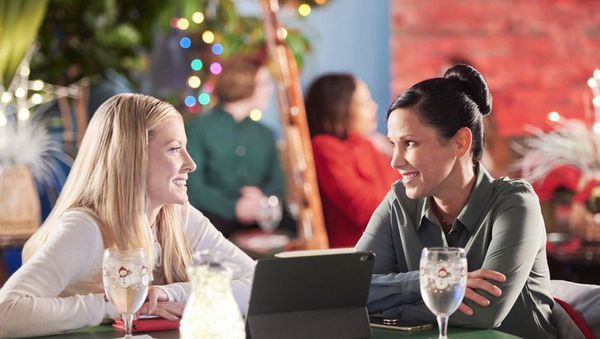 Dalton's Lori Beth Sikes Eicholtz, who plays Regina in "Christmas at Graceland: Home for the Holidays," shares a scene with Kaitlin Doubleday, who portrays Harper Ellis, in the Hallmark Channel film that premieres Saturday night.

Lori Beth Sikes Eicholtz was joined by her parents, Kerry and Caren Sikes, and daughter, Emery Edgeman, at the premiere of "Christmas at Graceland: Home for the Holidays" Thursday night at Graceland in Memphis, Tennessee.

Dalton's Lori Beth Sikes Eicholtz, who plays Regina in "Christmas at Graceland: Home for the Holidays," shares a scene with Kaitlin Doubleday, who portrays Harper Ellis, in the Hallmark Channel film that premieres Saturday night.

Those looking to find some early holiday spirit can check out the Hallmark Channel's "Christmas at Graceland: Home for the Holidays" and watch Dalton native Lori Beth Sikes Eicholtz at the same time Saturday night.

"I love Christmas — it's my favorite holiday — and this is my third Hallmark movie," Eicholtz said. "All the characters are endearing in these movies, and it makes your heart feel good."

She auditioned in July for "Christmas at Graceland," and shooting was conducted during July and August, which led to a few challenges for the cast, since they were wearing winter attire to match the film's setting, she said. "It was the heat wave of the summer, and we were all dying."

Prior to Saturday's TV premiere, she attended a screening at Graceland and joined other cast members in turning on the property's holiday lights display, she said. "I'm a Southern girl and grew up loving Elvis, so it's very special" to shoot scenes at Graceland and then return again for Thursday's festivities.

In the film, she portrays Regina, the only character in the movie based on a real person (Graceland's longtime events coordinator) and acts as quasi-matchmaker for Owen Reed (Adrian Grenier, "Entourage," "The Devil Wears Prada") and Harper Ellis (Kaitlin Doubleday, "Waiting," "Empire"). She also got to share a scene with Priscilla Presley, who has a cameo in the movie.

"I got to talk to her between takes, and we asked her" questions about her father, the family, and Graceland, she said. "She's a very kind lady."

Eicholtz has been performing in music and dance since age 5, but it was only while she was in college at Georgia State University that she began auditioning for plays, she said. She quickly got into "on-camera" work, but she still thought of herself more as a singer/dancer than actress.

"It took awhile for me to say I'm an actress, because you don't get to do it every day," she said. With 2009's "Get Low," however, "I felt I could call myself that," because she was part of a cast that included three screen legends.

In recent years, she's focused on teaching dance locally, as well as helping her daughter, Emery Edgeman, break into the film industry. Edgeman — who, like her mother, is represented by People Store in Atlanta — was cast in the Ron Howard-directed drama "Hillbilly Elegy," starring Amy Adams and Glenn Close, which is scheduled for release in 2020.

"There's a pretty steep learning curve (to the acting business), and I would have loved to have someone help me," Eicholtz said. "I went to my first audition without even a headshot."

The industry has undergone rapid change in recent years, she said. For example, most casting decisions are made via submitted tapes — she was cast in "Christmas at Graceland" off of such an audition — rather than in-person.

In addition, the rise of Georgia as a locale for filming movies and TV shows has altered the dynamic for actors from the Southeast, she said. "It used to be a pretty small pond with not a lot of fish, but now it's a big ocean with a lot of fish."

In the early years of Georgia's ascent in film, when a production "wanted to go local, we were pretty much all a family, and we all knew each other," she said. As Georgia became a colossus, "actors came from everywhere."

Film and TV production supports nearly 100,000 jobs in the state, according to U.S. News & World Report. In 2017, Georgia was the top shooting location in the country for the highest-grossing U.S. movies.

Georgia Department of Economic Development Commissioner Pat Wilson noted in a press release earlier this year that "The film industry creates jobs across almost every profession; in addition to camera, lighting and audio, film companies hire Georgians with skills in a myriad of support services including construction, catering, transportation, accounting and payroll, and post-production."

Since the state sweetened tax incentives for productions in 2008, the industry has had a nearly $10 billion impact on Georgia, according to the Atlanta Journal-Constitution.

“The entertainment industry has found a home in Georgia,” Georgia Department of Economic Development Deputy Commissioner for Film, Music & Digital Entertainment Lee Thomas stated in a release earlier this year. “While the spotlight certainly shines on our competitive incentive, it is the Georgia-based skilled crew, diverse topography, available infrastructure and the hundreds of small businesses that support our productions that keep us ranked as one of the top filming locations in the world.”

While the influx of talent has made work in film more competitive, it's been a boon for Georgia, Eicholtz said. "It's good for the state, for the industry, and for jobs."

"Christmas at Graceland" premieres at 8 p.m. Saturday, but it will be rerun several times throughout the holiday season, Eicholtz said. Times and dates of those showings, as well as more details on the film, can be found on hallmarkchannel.com.