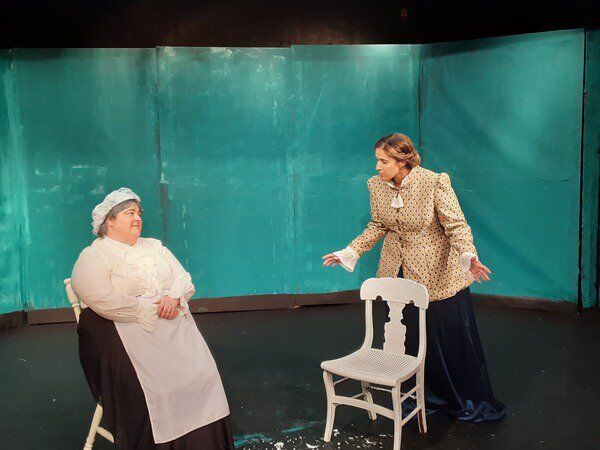 Anne Marie (portrayed by Karin Parker, left, in "A Doll's House, Part 2"), the Helmer family's nanny, stepped in as essentially the mother to the children when Nora Helmer (Ayana Winchester) left home, and "there's some resentment there toward Nora," said Parker. "I don't think she can ever understand why Nora left, because leaving your children is the cardinal sin to her." 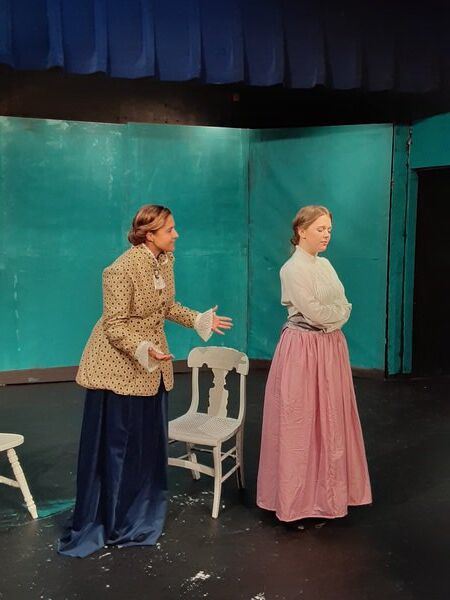 While Nora Helmer (portrayed by Ayana Winchester, left, in "A Doll's House, Part 2") can bat down most of the slings and arrows from those in her past, she's "at her most vulnerable" in a conversation with her daughter, Emmy (Shelby Hearn), whom she left as a young child, said Winchester. "I missed out on her life because I left -- it's a real dagger -- and the absence I feel in that scene is palpable." 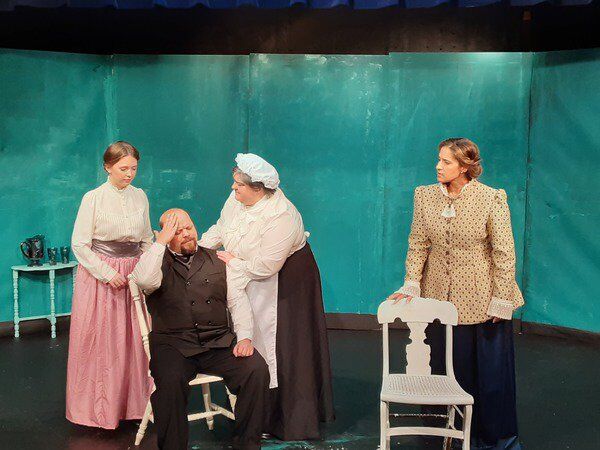 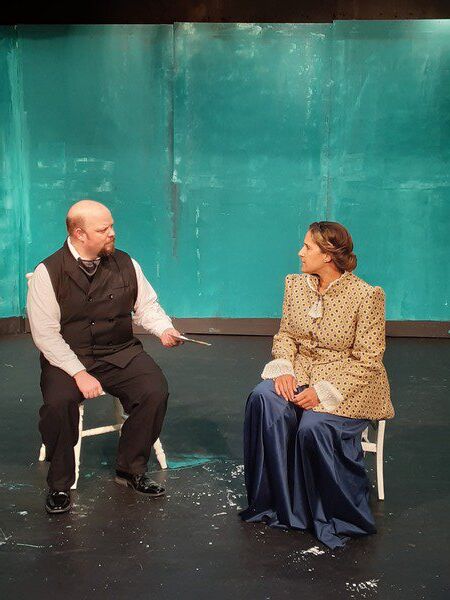 Anne Marie (portrayed by Karin Parker, left, in "A Doll's House, Part 2"), the Helmer family's nanny, stepped in as essentially the mother to the children when Nora Helmer (Ayana Winchester) left home, and "there's some resentment there toward Nora," said Parker. "I don't think she can ever understand why Nora left, because leaving your children is the cardinal sin to her."

While Nora Helmer (portrayed by Ayana Winchester, left, in "A Doll's House, Part 2") can bat down most of the slings and arrows from those in her past, she's "at her most vulnerable" in a conversation with her daughter, Emmy (Shelby Hearn), whom she left as a young child, said Winchester. "I missed out on her life because I left -- it's a real dagger -- and the absence I feel in that scene is palpable."

With the COVID-19 pandemic causing many women to leave the workforce to care for their children, the Dalton Little Theatre will premiere "A Doll's House, Part 2" this Friday.

The production picks up 15 years after the events dramatized in Henrik Ibsen's 1879 play "A Doll's House," which caused a sensation when it debuted for depicting a woman walking out on her husband and children in search of self-actualization.

"It feels very timely because we're going through a pandemic that has made everyone think about family and familial roles," said director Tammy Rice. "Women are having to deal with that burden, and this is a play that asks questions like 'What do I want in life?' and 'Who am I?'"

Nearly three million women in America have dropped out of the workforce during the pandemic, according to CBS News.

"Many women, particularly mothers of young children, have been furloughed or laid off, (while) many others have had to choose between showing up at front-line jobs or caring for their children who, with daycare centers closed and school underway remotely, would otherwise be left without supervision."

Playwright Lucas Hnath's work catches up with characters from "A Doll's House" 15 years after Ibsen's drama concluded, as Nora Helmer returns to her former home and meets those she left behind.

After leaving her husband and children, Nora "did incredibly well for herself" as a novelist — "much better than anyone would have expected of her" during an era with few opportunities for women outside of the home — and "she doesn't mind letting you know it," said Ayana Winchester, who plays Nora. "She's quite full of herself, but, ironically, she needs help from the very people she left."

And while Nora can bat down most of the slings and arrows from those in her past, she's "at her most vulnerable" in a conversation with her daughter, Emmy, whom she left when Emmy was a young child, Winchester said. "I missed out on her life because I left — it's a real dagger — and the absence I feel in that scene is palpable."

"We're strangers, because she left when I was like 4, and now I'm 19 or 20, and I don't know her," said Shelby Hearn, a freshman at Dalton State College who plays Emmy. "I thought she was dead — the whole town did — until I figured it out myself the hard way by doing some digging."

Emmy "grew up before" she should have, so "she's an old soul, very smart and sarcastic," said Hearn, a member of Southeast Whitfield High School's class of 2021. Though "realistic," Emmy "loves love."

Unlike Nora, "she wants to get married and have a family," said Hearn, who was named best actress at this spring's region competition as a member of Southeast's one-act "A Piece of My Heart," which earned Hearn and her fellow performers a spot in the state one-act competition. "She wants what she didn't have."

Anne Marie, the Helmer family's nanny, stepped in as essentially the mother to the children when Nora left, and "there's some resentment there toward Nora," said Karin Parker, who plays Anne Marie. "I don't think she can ever understand why Nora left, because leaving your children is the cardinal sin to her."

Nora is "a big picture person, and Anne Marie is more pragmatic," Parker said. "Her idealism is in a small world, because she sees that world has a certain role for women, and she sees Nora as unrealistic, so the two of them may as well be speaking different languages."

As a mother of a 14-year-old and a 16-year-old, Winchester can "identify with Nora so much," but imagining reuniting with her child so many years after voluntarily abandoning her is almost too much for her to take, she said. "That scene gets me every time we run it."

Part of the emotional resonance of this play is its relatability, Rice said. "There's not a man or woman in this audience who won't find something they identify with" in "A Doll's House, Part 2."

Hnath zeroed in on "the human condition and fraught relationships" so adroitly that each character has moments where audience members will identify with him or her completely, but each also has moments where the audience will see him or her as clearly petty, said Kirt Johnson, who plays Nora's husband Torvald and is also a member of the Dalton Little Theatre board. "There are no angels or demons, and each character has great lines and moments to shine."

Torvald is living "a solitary existence, going to work and home — he's settled into a second bachelorhood" — when Nora returns, and "it throws him off kilter, because he's shocked," said Johnson, a Dalton Little Theatre veteran. "He's so buttoned up and repressed — he doesn't let his anger show — but later in the play he and Nora get into a shouting match."

Rice has "loved this show for a long time — I saw it on Broadway and a couple other times — (because) it's so smart, funny, audacious, fast-paced, rollicking and thought-provoking," she said. "Anyone who liked 'A Doll's House' (and/or) has opinions on 'A Doll's House' will enjoy this, but you also don't have to know anything about 'A Doll's House' to enjoy this, because it stands on its own beautifully."

"I had a vision of this show, but the four (cast members) have made the magic happen," she said. "They're four perfect people, and (Winchester) is just flawless as Nora."

This is the most-expansive and demanding role Winchester has played, and because her character never leaves the stage during the play's 90-minute duration, it's "very taxing," but "I like parts where I can grow and do more, (so) it was such a wonderful opportunity I couldn't pass up," she said. "I like to learn more about theater — and myself — and I believe the day you stop learning is the day you die."

She altered her usual preparation to make sure "I don't get lethargic" on stage, and the fact "I'm surrounded by incredible people" also provides her energy, she said. "Every one of them is so gifted, and I feed off of them, which is a treat for me."

She also devoted herself to research, gobbling up anything she could consume about the play and her character, she said.

"It all helps me create a firmer foundation for myself, and then I can really throw myself into (my performance)."

This is Winchester's third Dalton Little Theatre show. She started acting as a child, pausing while in college to focus on academics and work before diving into community theater as an adult, she said.

"I'm a textbook introvert, but (acting) is so freeing, (as) I'm a wallflower otherwise."

This is Hearn's initial community theater effort, and "it's such a great first production," she said. "It's been amazing."

This is also Parker's first show for the Dalton Little Theatre, and she was lured by Rice, she said.

"My brother was in a show Tammy directed that I was blown away by, so I wanted to work with her, and this cast is incredible to work with."

"A Doll's House, Part 2" opens Friday at 7 p.m., with additional 7 p.m. productions this Saturday and on Sept. 24-25, with a 2 p.m. matinee this Sunday. Ticket information, including online purchasing, is available at daltonlittletheatre.com/tickets.

After going dark during the pandemic, "we're really excited to come back," but that enthusiasm is "tempered" by the high number of COVID-19 cases in the community, Rice said. "We've missed theater, and we hope people see this show, because it's really, really good."

Due to the pandemic, masks are required for audience members inside the theater, as "we want people to feel comfortable and protect the community," Rice said. All cast members and volunteers had to be fully vaccinated against COVID-19.

"We're not serving popcorn, and we're not doing the meet-and-greet after the show," she said. "We've made sure all the seats are at least six feet from the stage."

It's "a relief to be back, and we've taken a very proactive approach, making safety a priority," said Johnson. "We want to give art back to the community."

When Johnson read the play, he "definitely got invested in these characters," he said. "I hope (Hnath or someone else) writes another sequel, and I'd want to (act) in that one, too."