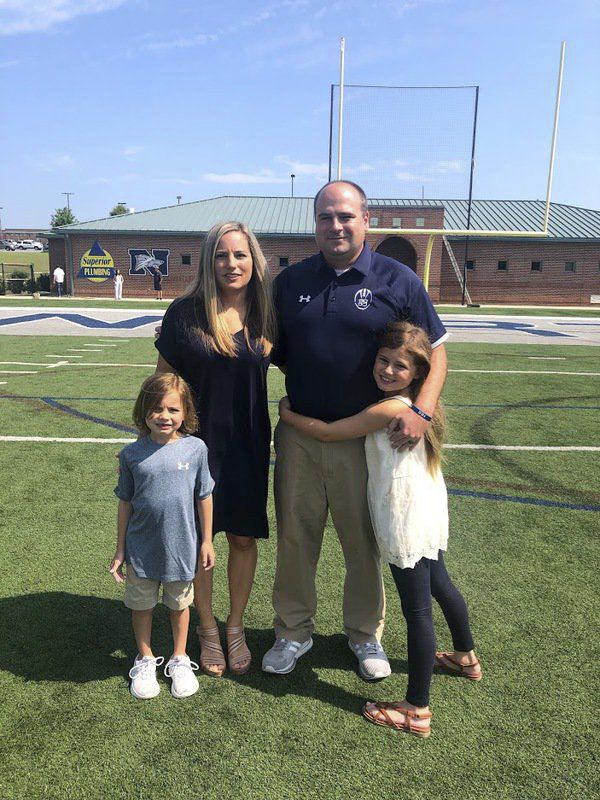 The new coronavirus (COVID-19) pandemic has curtailed travel and large gatherings, so Ryan Dyer, a Dalton native and the athletic director of North Paulding High School (pictured on North Paulding's football field with his wife, Candice, and their two children, Ava Bray, 9, and Bryce, 6), organized a virtual clinic for his Dallas school featuring numerous coaches, including several with Dalton connections. 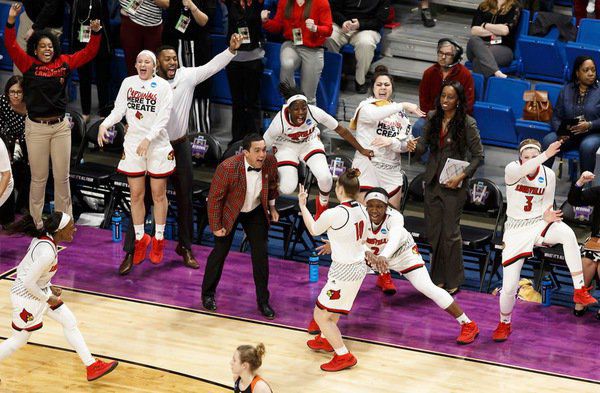 "You can't inspire others unless you can inspire yourself, and players can see that," said Sam Purcell, the associate coach for the University of Louisville women's basketball team and a Southeast Whitfield High School alumnus. "If you get yourself right, players will recognize that and be more motivated."

The new coronavirus (COVID-19) pandemic has curtailed travel and large gatherings, so Ryan Dyer, a Dalton native and the athletic director of North Paulding High School (pictured on North Paulding's football field with his wife, Candice, and their two children, Ava Bray, 9, and Bryce, 6), organized a virtual clinic for his Dallas school featuring numerous coaches, including several with Dalton connections.

"You can't inspire others unless you can inspire yourself, and players can see that," said Sam Purcell, the associate coach for the University of Louisville women's basketball team and a Southeast Whitfield High School alumnus. "If you get yourself right, players will recognize that and be more motivated."

It's critical not to waste time during the pandemic, but, rather, continue to learn, grow and improve, said Dyer, who is also North Paulding's assistant principal. "We're going to come out of this, either better or worse, because you don't stay still."

Dyer, a longtime basketball coach before he ascended to the athletic director role, considered what he would want from a clinic as a coach, then set out to create that type of workshop.

"As a coach, we'd talk about that 'reset mindset,'" and at North Paulding, the school focuses on the extra 1%, how much "little things matter," he said. All the speakers used that notion, that "getting a little better every day makes the difference," as a base for their individual topics.

"Everyone was outstanding," especially Prohm, who was "fantastic," Dyer said. "He did such a great job."

Also superb in the online clinic was Jon Gordon, a best-selling author and speaker, Dyer said. "It was amazing, because (Gordon) doesn't usually do things like this."

Purcell discussed the power of a contagious attitude, and how, during difficult times like the pandemic, "you have to invest in yourself," said the Auburn University alumnus. "Pour in more knowledge for yourself."

"You can't inspire others unless you can inspire yourself, and players can see that," Purcell said. "If you get yourself right, players will recognize that and be more motivated."

It's pivotal to remain positive in the face of adversity, a point he emphasized with Louisville's players, he said. While they didn't get to play in the NCAA tournament this year and compete for a national championship due to the pandemic shutdown, they did play more than 30 games, which is better than spring sports "that never got going."

Ingle concurred, noting he prefers to look at these "challenging times" as "times for opportunity, (rather than) times of adversity."

"If you take away my struggles, you take away my chances for growth," Ingle said. Or, as one of Ingle's heroes, legendary former UCLA men's basketball coach John Wooden, said: "Don't let what you don't have interfere with what you can do."

Ingle long admired Wooden, who won 10 NCAA national championships in a 12-year period as head coach at UCLA, including a record seven in a row, and he even visited the coach at his home in California, where the Presidential Medal of Freedom winner taught Ingle another valuable lesson.

Ingle asked Wooden about the legacy he hoped to leave, and the coach didn't mention any of his on-court triumphs, he said. Instead, he wanted his epitaph to be simply: "He really cared."

In four-plus decades of coaching at various levels of basketball, Ingle believes all of his players knew he "loved them and cared about them," he said. "I just love people."

"Coaches are carriers (who) carry kids and help them find the greatness in them," he added. "That's why I coached."

Ingle has been a head coach at five levels of basketball in Georgia, and as an evaluator, he looks for three things in players.

"Are they coachable, are they a good fit, and do they love the game?" he said. "If you just like it, you won't make it."

However, "if your dream is big enough, then any obstacles will be small enough to overcome,'' he said. "Keep going until you reach your dream."

Ingle overcame adversity in his own life, severely injuring his knee in the 1973 national tournament while playing at what is now Dalton State College, but was then a junior college. His team lost that game by one point, and as he prepared to fly to Chattanooga for surgery, "I felt I had let everyone down."

"I felt I owed Dalton a national championship," and, decades later, he delivered, coaching Dalton State to the NAIA national title in 2015, he said. The reaction from the public to that championship "surpassed even my dreams."

Reaction to the spring clinic from those who joined the Zoom conference has been overwhelmingly positive, Dyer said. "It was a huge pickup for everyone and huge for my mental health, too."

That wasn't Dyer's only virtual outreach effort, either.

For example, "we also had (Atlanta Braves shortstop) Dansby Swanson talk to our seniors of our spring sports in our virtual ball field," and "we did a virtual signing (day) at out school," he said. Swanson's appearance was a surprise to students, which made it even more special to them, as he "talked about adversity and bouncing back."

As for the virtual signing day, "I'll never forget the day I signed" to play basketball at Maryville University in St. Louis, "because I never thought it would happen, (and) I wanted those kids to have the same opportunity," Dyer said. Roughly 20 North Paulding athletes signed, and "it was uplifting for these seniors who already have had so much taken from them" this spring and summer due to the pandemic.

Dyer is also planning to open up his Zoom for questions from students, coaches, parents, etc., this summer for a couple of hours each week, he said. "It'll be like when you drop by my office for a few minutes to check in and chat."

At 36, Dyer is one of the youngest athletic directors in the state, and while he misses coaching, he's ecstatic in his new role, he said. "I got my doctorate a couple of years ago, and when this (job) opened up, I knew it was time."

He remains connected with Dalton, and he's grateful for everything he learned growing up in this area, he said: "I do love Dalton."