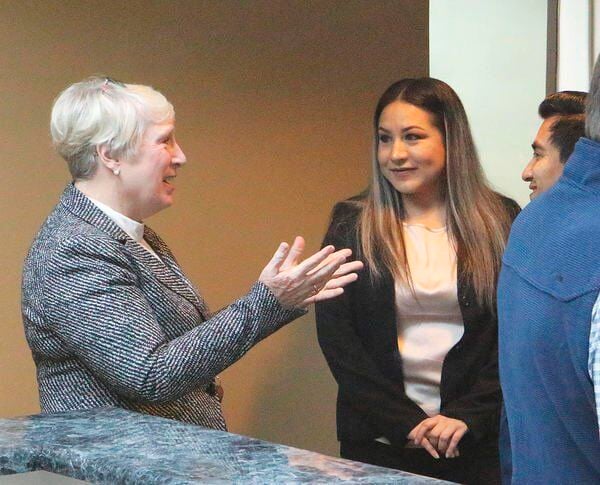 Judge Cindy Morris talks about the history of efforts to stop domestic violence here and says the new Domestic Violence Court will serve as a model for the rest of the state. 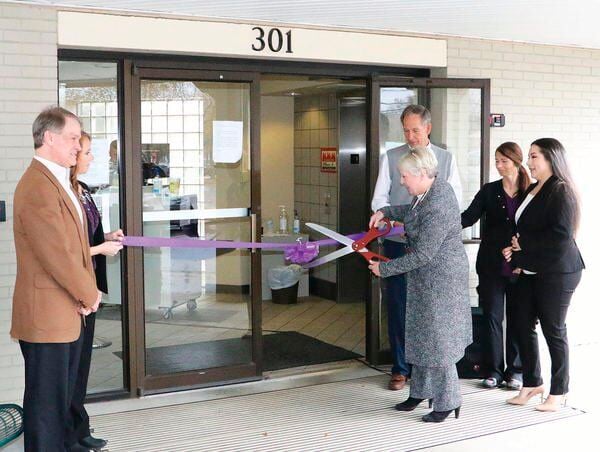 Judge Cindy Morris talks about the history of efforts to stop domestic violence here and says the new Domestic Violence Court will serve as a model for the rest of the state.

Closing a revolving door of multiple domestic violence victims by the same offender is one of the goals of an expanded Conasauga Circuit Domestic Violence Court that is serving as a model for the rest of the state.

Program organizers and community partners gathered for an open house on Thursday, Nov. 18, to share the good news about a recent matching federal grant that will allow expansion of the existing Domestic Violence Court program.

“We’ve had Domestic Violence Court in a less formal, totally unfunded form since 2014,” Judge Cindy Morris said before cutting a ribbon to officially open the facility, located in the Accountability Court Building at 301 W. Crawford St., “but this grant allows us to get the funding to hire staff, do drug testing, get the education we need, and really take it to the next level as an accountability court.”

Citing the “overwhelming need” for such a program, the judge said domestic violence is a “very prevalent” problem in the community, but fortunately “the community has already done a lot to address it.”

One way the community has already been helping is through the Northwest Georgia Family Crisis Center. Director Katora Printup was at the open house to show her support and said the center served 1,754 clients last year in Whitfield, Gordon and Murray counties through three outreach offices and a shelter. The center has a 24/7 crisis hotline, where victims may call (706) 278-5586 for assistance.

The Domestic Violence Court aims to reduce the number of victims who seek a safe haven at the crisis center by offering intensive help to qualified offenders to stop the circle of domestic violence.

The 12-month program is already underway with two participants who are doing “amazingly well,” Morris said.

The judge praised accountability court administrator Jennifer Phillips for writing her first federal grant, calling it a “very competitive, vigorous process, and she brought it home for us.”

Morris also cited the help of the Whitfield County Board of Commissioners, who voted unanimously to accept and match the grant.

Speaking at the open house, board Chairman Jevin Jensen admitted he had grown up “very sheltered” and didn’t realize how many people domestic violence impacted until several years of service on the United Way panel that helps fund agencies like the Family Crisis Center.

The birth of his daughter in 2005 also helped open his eyes to the “impact that domestic violence has on all families, and not just women and children, but men as well,” Jensen said.

The Domestic Violence Court grant fits nicely into the county’s new emphasis on grants, including the hiring of a grant administrator. Morris’ matching grant opportunity “was perfectly aligned with our strategy,” Jensen said, “and of course I had a passion going back 16 years ago learning about domestic violence and the impact that it has. I’m fortunate that I grew up sheltered, but my eyes are open now and I know how it affects the community and we have to do something about it.”

Leading the charge since being hired in June has been the Domestic Violence Court coordinator, Laura Mares, who had previously seen the effects of domestic violence firsthand through her position as victim advocate at the Family Crisis Center, where she said she would continuously see different victims abused by the same man.

“These offenders are coming into the system and going back out and reoffending,” Mares said. “Essentially, what we’re trying to do is make sure that they go through an intense program with increased accountability and monitoring that will address long-term behavioral and attitudinal change in the perpetrators. Our goal is to increase victim safety by mandating the perpetrator to complete this 12-month program."

Mares said she was very fortunate to have been given the opportunity to help develop this program along with other individuals who support this court and who believed there was a need for a coordinated community response to domestic violence cases.

“We’ve added the extra accountability to hold them accountable for their actions and their behavior,” Mares said. “The ... end goal is to handle DV cases more efficiently and provide a stronger focus on offender rehabilitation and compliance, achieve a successful completion rate by each participant (offender), achieve long-term behavior change, and eliminate the likelihood of recidivism, thus creating safer relationships, homes and families. That’s the purpose of Domestic Violence Court.”

While other accountability courts like Drug Court, Mental Health Court and Veterans Court honor their successful participants with incentives and graduation ceremonies, that won’t be the case with the Domestic Violence Court, Mares said.

“We’re not a typical accountability court because we do not hold graduations,” she said. “There is a victim involved, so we do not want to applaud the participants. But we will acknowledge the hard work that they have shown throughout the 12-month program that they have adhered to. We don’t provide incentives either — the incentive is that the offenders will not go to jail if they are compliant with the program rules.”

Instead, the program provides offenders with the opportunity to receive treatment and resources to get them back on track and prevent them from reoffending and also to help address the core issue for their learned abusive behavior, Mares said.

In the past, the offenders did not receive any kind of monitoring or added accountability, she said.

“It was just a first appearance in court,” she said. “They would get arraigned, plead guilty or not guilty, and they were ordered to go through a family violence intervention program. But they weren’t held to the same standards that we’re holding them to.”

The added accountability, she said, is that offenders have to submit to random drug screens 365 days a year, must see Mares weekly, show up for weekly appearances before the judge and complete a family violence intervention program.

A compliance officer has also been added to the program, whose role is to supervise the participant (offender) in the community and make sure they are being compliant with the requirements mandated by the participant’s inclusion in the program.

“It’s an intense program to say the least,” Mares said, “but it’s to the advantage of the offender because essentially they are receiving treatment that will not only benefit them in becoming productive members of society but it also provides safety to the victims involved. We want to make sure that the community understands that domestic violence is a real issue, and we’re trying to prevent the offender from reoffending.”

Mares praised the community for its help trying to eliminate domestic violence.

“We do have a problem with domestic violence,” she said. “Are we working as a community to resolve that? Absolutely! We have a great team — I work together with the District Attorney’s Office, the Public Defender’s Office, Probation is on board, the crisis center is on board — all working as a community to relieve the domestic violence issues within our community.”

Those efforts have already captured the attention of other courts around the state, with staff members from Fulton County at the open house to talk to Mares and other staff members about the new program.

“We’re trying to become the model for the state of Georgia because domestic violence is not just an issue that we have here in our community, it’s nationwide,” Mares said. “So we’re working really hard to make sure that this program is successful and offenders are rehabilitated at the end.

"In 2014, when Domestic Violence Court was formed here, they did it with absolutely no funding. Volunteers from the DA’s Office and Public Defender’s Office would help and pick up what needed to be done, but essentially there’s not been a (funded) Domestic Violence Court in the state of Georgia until now. We were very fortunate to have received the grant.”