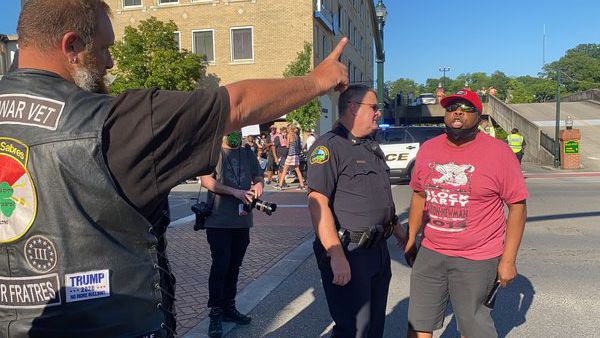 A man participating in the "March For McCamy" and another man exchange words on Saturday in downtown Dalton. 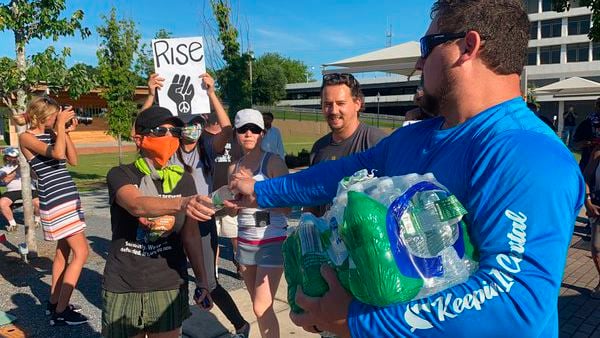 A man hands bottles of water out to people participating in the "March For McCamy" in downtown Dalton Saturday night. 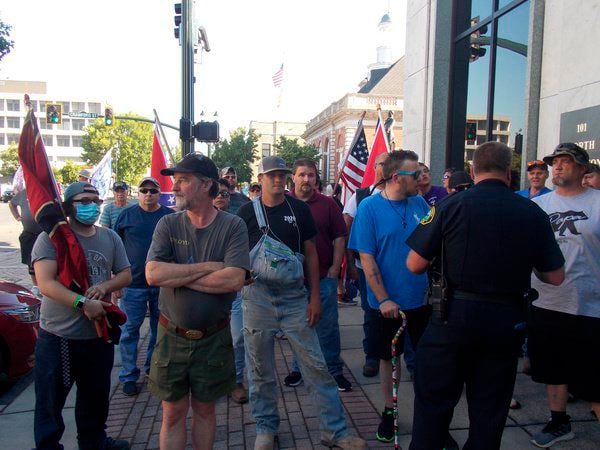 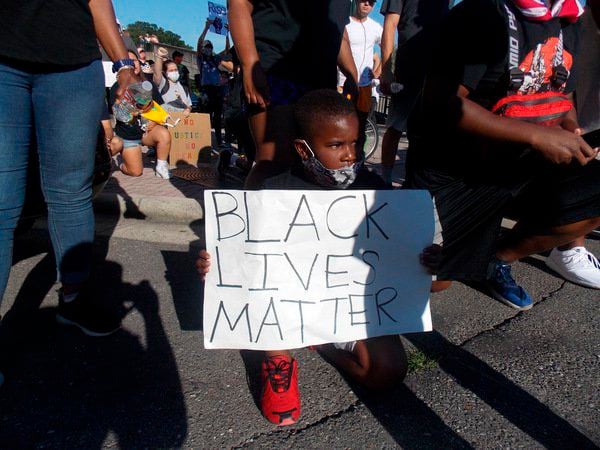 A boy holds a sign at the "March For McCamy." 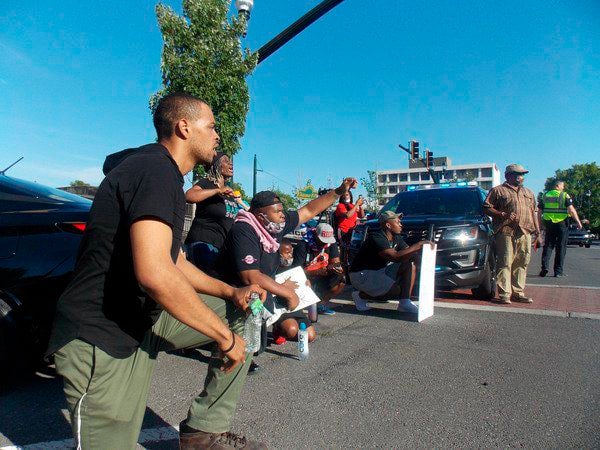 Protesters with "The March For Justice" take a knee on Hamilton Street in downtown Dalton. 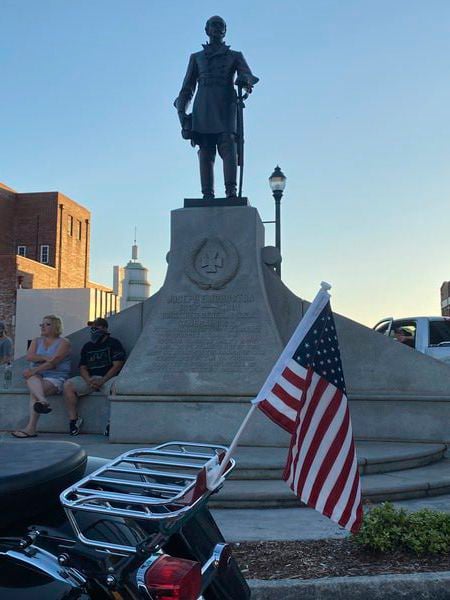 A man participating in the "March For McCamy" and another man exchange words on Saturday in downtown Dalton.

A man hands bottles of water out to people participating in the "March For McCamy" in downtown Dalton Saturday night.

A boy holds a sign at the "March For McCamy."

On one side of Hamilton Street, people kneeled and raised their fists aloft as they chanted "Black lives matter!"

On the other side of the street, people waved Confederate flags while one man yelled, "Yeah, take a knee quarterback!" — an apparent reference to former NFL player Colin Kaepernick, who created a firestorm by kneeling during the national anthem to protest the oppression of black people.

Tensions ran high Saturday night as about 60 protesters with the "March For McCamy" stopped across the street from the Gen. Joseph E. Johnston Confederate statue in downtown Dalton. On several occasions, members of the Dalton Police Department had to step in and separate marchers and a group that has gathered to watch over the statue. Officers implored people from both groups to stay on the sidewalks.

One man waved a flag with the words "Trump" and "Make America Great Again!"

Across the street a young boy held a sign that read "Black Lives Matter."

One group chanted "No justice, no peace" and "Whose street? Our street!"

Some in the opposing group shouted "All lives matter," "Biden's (expletive)" and "Get out of Dalton."

While the groups exchanged harsh words, there was no violence and no arrests. After tempers cooled, people from both groups stood on the sidewalks calmly discussing racism, the Civil War and the symbolism of the Johnston statue.

The Johnston statue was not the intended focus of the march but rather A.L. McCamy, a black man who was lynched and hanged in Dalton in 1936.

However, the Johnston statue took center stage. Some are calling for the removal of the statue as they see it as a symbol of racism that does not reflect the city's values. Others insist the statue represents Dalton's history and should stay exactly where it has stood since 1912.

On Monday night, about 200 people gathered on the lawn of Dalton City Hall following a "March for Justice." ("March For McCamy" was not affiliated with "The March for Justice.") One of the "March for Justice" group's demands is relocating the Johnston statue. Members of the Dalton City Council said this week they would be amenable to having the statue moved. The statue owner, the local chapter of the United Daughters of the Confederacy (UDC), is willing to consent to the relocate the statue if that's what the city council decides. The group's consent to relocate the statue is contingent on the council or others paying for its "safe relocation" since the UDC lacks the money to pay for the move.

Rocky Face resident Tyler Martin is on the side that wants the statue to stay. He is one of the administrators of the Facebook page "Don't Let Joe Go," which has about 7,400 followers. Martin views the Johnston statue as an important part of Dalton's history.

"To me, I ask that people look at it for what it is," Martin said. "It's a landmark. I talked to an elderly couple and in the '50s it was their date spot. I talked to a person that lived in the '30s and whenever they were walking to their parents it was a place where they stopped, their brothers and sisters stopped, and sat on the little benches around it to rest. It was a place where someone took a picture on their first date. It's a landmark, it's a piece of history here."

Cyrus Addison, a longtime Dalton resident who now attends college in Carrollton, joined the march and wants the statue moved.

"I feel like a lot of people forgot that that statue was even there," said Addison, a graduate of Northwest Whitfield High School. "But now that there's light on it and it has weight, he was a Confederate general. The Confederacy was a bunch of treasoners and traitors. How can you support that and live in America? You don't even live in the Confederacy. I feel like you're blanketing your racism or some kind of hatred behind that."

The issue of Confederate statues and symbols has emerged again nationwide as protests, some of which turned violent, have filled numerous cities in the aftermath of the death of Minneapolis resident George Floyd, a black man who died in police custody on May 25. Some Confederate statues have been vandalized, others were toppled and a man suffered life-threatening injuries Wednesday night in Portsmouth, Virginia, when he was struck by a statue pulled down from a Confederate memorial by protesters.

Since June 1, there have been three protest marches in Dalton. All remained peaceful, but Saturday night's protest was the most tense.

On Friday morning, an attorney representing the UDC sent a press release to the Daily Citizen-News stating the group is "concerned for the safety and security of all parties on each side of this discussion and conflict, and further desiring that there be no conflict among the citizens and visitors of this community, respectfully request that all parties stand down to prevent further disruption, disunity or harm."

After the marchers dispersed Saturday night, the area around Johnston's statue quieted down. People lingered around the statue. Some sat in lawn chairs in the shade. Passersby voiced their approval — and disapproval — from their cars. A man played a trumpet across the street in Burr Performing Arts Park.

One man said he held vigil at the statue until 4 a.m. Saturday, then remarked that he would probably stay the entire night to make sure the statue wasn't vandalized.