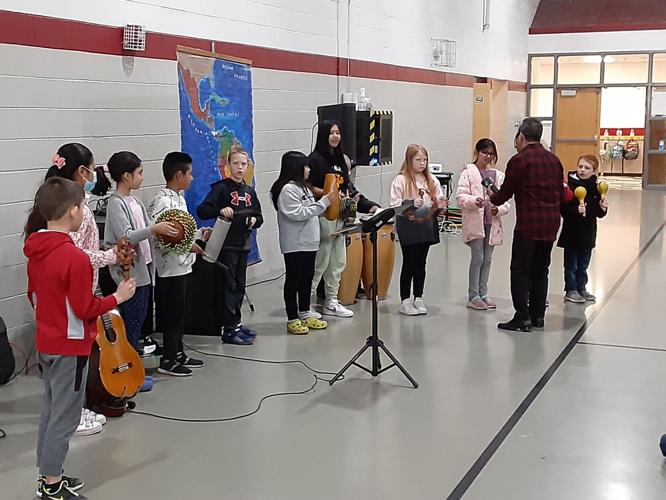 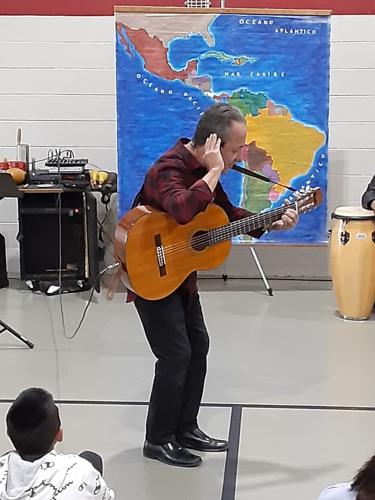 After a year in which most Oscar N. Jonas Foundation artists appeared virtually to students due to COVID-19, those artists have returned to schools this spring in person, and “we’re so glad to be back in the schools, (as) the kids can participate more,” said Susan Reams, who chairs the board of the Jonas Foundation.

That participation was obvious at Dug Gap Elementary School when nearly three dozen students were able to play various instruments during a jam session with the Tahino Latin music group.

Jonas Foundation artists “did a great job with virtual, but it’s just not the same experience,” said Emily Rich, Dug Gap’s media specialist. Students “see it like a TV show, almost, (but) now it’s a real person doing something.”

Otto Rondon, who founded Tahino in 1992 to teach children about the music and culture of Latin America, demonstrated to students how to use the instruments, many of which originated in Latin countries like Brazil. He also provided a geography lesson of Central, North and South America, and illustrated how a person can learn about the cultures of Latin countries through music.

“Music made a big difference for us,” Rondon said. “Music changed our lives.”

A native of Venezuela, Rondon began performing traditional folk music with his siblings at local community festivities at age 7, and he was introduced to Spanish Flamenco music while training as a bullfighter, according to the Jonas Foundation. He began to study classical Spanish guitar, moving to Aruba and founding a musical group before relocating to Atlanta in 1979. He’s been performing at restaurants, festivals, schools, libraries and museums since.

Tahino came to Cedar Ridge Elementary School when Laurie Harless was assistant principal there, so she was thrilled that Tahino came to Dug Gap this year, said Dug Gap’s first-year principal.

The group also visited several other schools in Dalton, Whitfield County and Murray County this spring. The Jonas Foundation raises funds for art education programs and sends artists to more than 40 schools — including schools in the Dalton Public Schools, Murray County Schools and Whitfield County Schools systems — served by the Jonas partnership, according to Reams. Oscar N. Jonas, a Dalton carpet pioneer and community leader, was an advocate for the arts, as was his wife, Peggy. Following his death, friends united with business, civic and educational leaders to create the foundation, which has a mission of promoting the arts locally, including in schools.

“Getting them (students) exposed to the arts, in general, is a great thing, I think,” said Rich. “This group (of students) did a play (the prior) week, and now they’re seeing another side of” the arts with Tahino.

Mr. Rex Allen Quarles, age 70, of Ringgold, Georgia passed away on Monday, May 16, 2022. He was born on June 23, 1951. He was preceded in death by his parents, Silas Quarles and Rose "Hawkins" Quarles; daughter, Natasha Quarles. He is survived by his wife of 40 years, Marcy Ann Quarles of Ri…

Sara Morgan, age 87, of Dalton, passed away Tuesday May 17, 2022. She is preceded in death by her parents James Lawrence and Alice Broome; brothers Perry Broome and J.L. Broome, Jr. She is survived by her husband Silas Morgan of Dalton; sons and daughters-in-law, David and Angie Morgan, Dann…