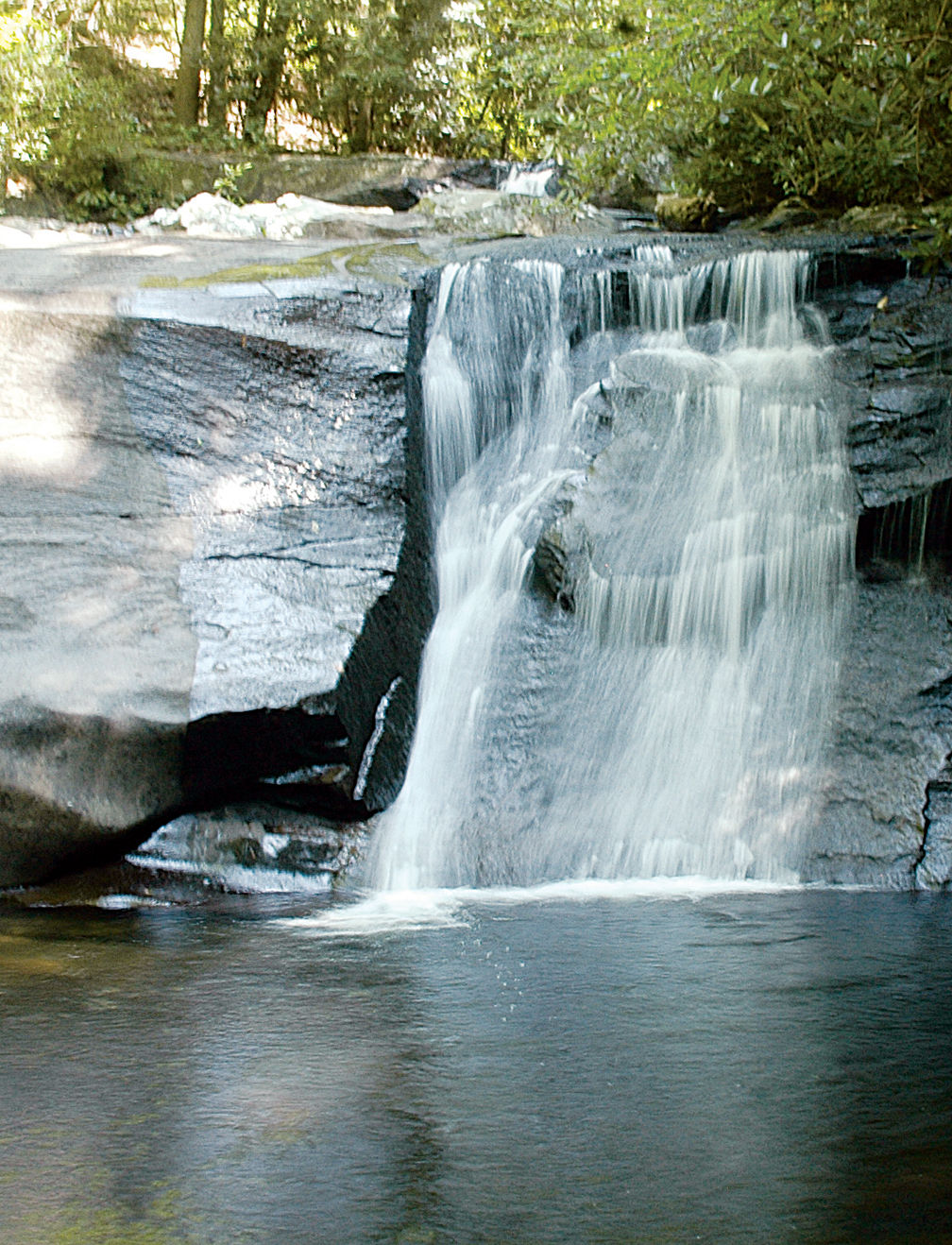 Water flows over a rock face at the upper falls at Emery Creek Falls. (Misty Watson/ The Daily Citizen) 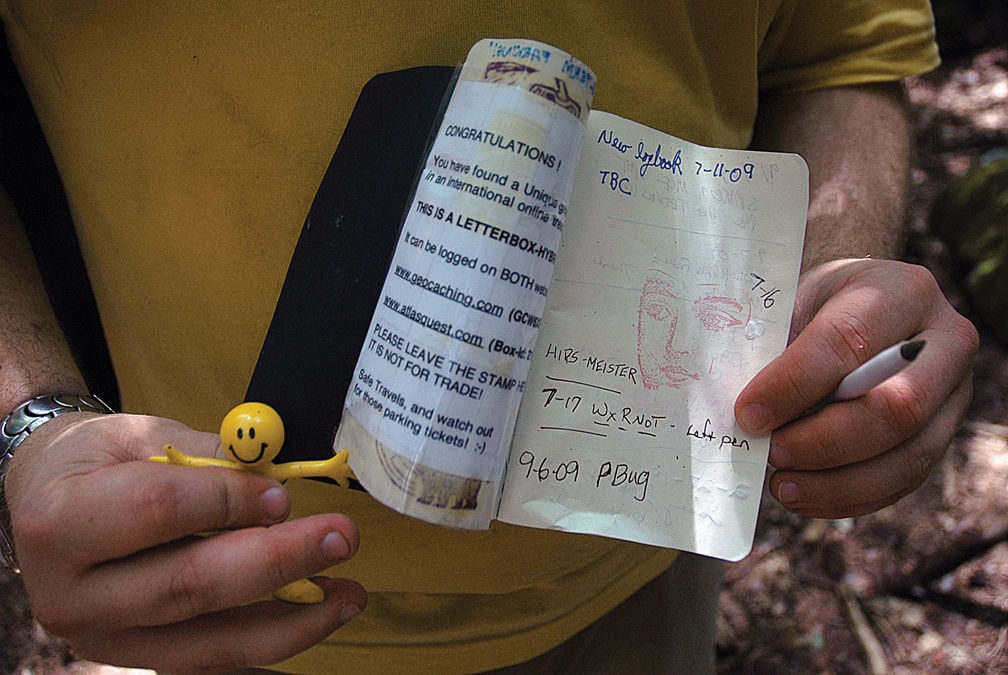 There are two geocaches hidden along the Emery Creek Trail, this one is hidden about 1.3 miles up the hike, and the other is at the falls. (Misty Watson/ The Daily Citizen)

Water flows over a rock face at the upper falls at Emery Creek Falls. (Misty Watson/ The Daily Citizen)

There are two geocaches hidden along the Emery Creek Trail, this one is hidden about 1.3 miles up the hike, and the other is at the falls. (Misty Watson/ The Daily Citizen)

But it wasn’t until a year and a half ago that he first discovered the natural beauty of Emery Creek Falls, a twin waterfall about a two-mile hike from Holly Creek on Grassy Mountain in eastern Murray County.

Griggs and his hiking buddy agree that Emery Creek Falls is definitely a “hidden jewel” in the forest.

“I grew up on this mountain,” said Griggs, of Ellijay, who was camping between the upper and lower falls earlier this week. “I’ve hiked around it for years. This is a pretty place. It’s worth coming here.”

The Emery Creek Trail head is about a mile to a quarter of a mile from where the pavement ends on CCC Camp Road. It’s just about a fourth of a mile past what’s known locally as the “swimming hole.” The parking area is on the left on a steep curve.

The hike to the falls is two miles from Holly Creek. The Emery Creek Trail continues 4.4 miles up the mountain to the Tearbritches Trail.

The Emery Creek Trail, which winds its way through a lush forest, crosses Holly Creek once, a small branch once and Emery Creek 10 times — and that’s just one way, meaning hikers will get their feet, and maybe even their knees, wet.

Larry Thomas, outdoor recreation director for the Conasauga Ranger District, said he thinks the hike itself keeps the place unknown to many.

“The first stream cross (at Holly Creek) is the toughest, and that’s probably what keeps people out and keeps the falls hidden,” Thomas said. “It’s the only deep crossing. But right now it’s dry, and you can almost rock hop. You will get your feet wet at normal pool ... most people just go to swim and hang out there in Holly Creek.”

On a recent Sunday hike, there were just a handful of people on the trail past where it crosses Holly Creek.

“It is a moderate hike,” Thomas said. “It’s not easy, but it’s not what I would consider difficult. Except under extreme conditions, (the creeks) aren’t going to be that high. If you get a few inches of rain in a short amount of time, Holly Creek is roaring. So don’t go out there if there’s been a lot of rain.”

The trail is not marked with many blazes, but it is fairly easy to follow except at some creek crossings. After crossing Holly Creek, veer left through the camping area to cross Emery Creek and continue on the trail. At one point, hikers must follow a rock bed along the trail. At another point, the trail joins with a mostly unused service road. Just take a right on the service road, and then a left to join back to the trail.

Thomas says since the trail is not well marked, an inexperienced hiker should go with someone who has more hiking experience.

The trail follows Emery Creek up the mountain, so it does get steeper in places, but for the most part, it’s a gradual incline.

Along the trail is evidence of a homestead that once stood there. A rusted truck cab sits along the trail as a reminder to times before the land became a national forest.

At the top of one of the hills there is a sign that points to the falls. Another points to continue the Emery Creek Trail.

One of the falls is about 40 feet, and the other is about 35, Thomas said.

“One drops down and goes a little ways, then the other one drops down,” he said. “It’s a beautiful area. And it’s a hidden treasure.”

The upper falls flow into a pool where hikers can take a break to swim. There is also an area that’s been cleared out between the falls that’s ideal for camping or an afternoon picnic.

For those who geocache, there is one cache hidden along the trail and another hidden at the falls.

Geocaching is described as “a worldwide game of hiding and seeking treasure,” according to the website www.geocaching.com. “A geocacher can place a geocache in the world, pinpoint its location using GPS technology ... Anyone with a GPS device can then try to locate the geocache.”

Thomas asks that people who visit the area “leave no trace so it will be just as pretty for our children and for the next time you go up there.”

Hikers should take water and wear appropriate footwear, he said.

Thomas warns visitors to be careful on the slippery rocks, especially at the waterfalls.

“Anytime people visit a waterfall, they need to be aware of the hazard of climbing on the rocks around or above the falls,” he said. “They have moss on them and are extremely slippery. A lot of people have died on waterfalls going a step too far.”

There is always a chance for hikers in the area to see wildlife such as deer, bears, hogs, turkey and several species of birds. Thomas says to also watch for poisonous snakes and yellow jackets, especially while sitting down to take a break or eat lunch. Yellow jackets build their nests in the ground, and snakes camouflage themselves around the leaves and logs.

The Holly Creek area is a day use only area. Unless visitors plan to camp along the trail, they must be out by dusk. No alcohol is allowed in the day use areas.

For more information on trails through the Chattahoochee National Forest contact the Conasauga Ranger District at (706) 695-6737.