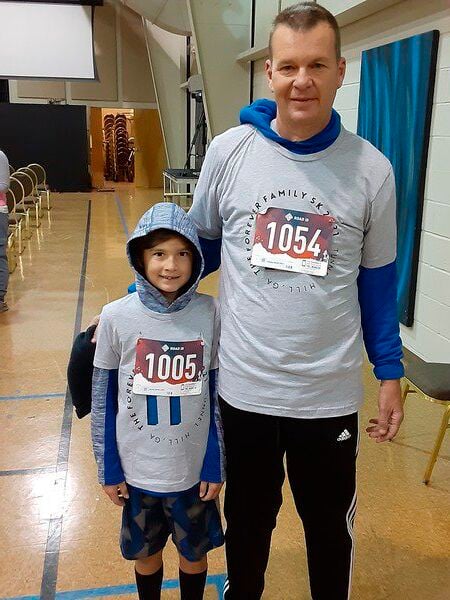 Running alongside his grandson, Brody Booth, was "the best part" of the Forever Family 5K, said Tommy Head. 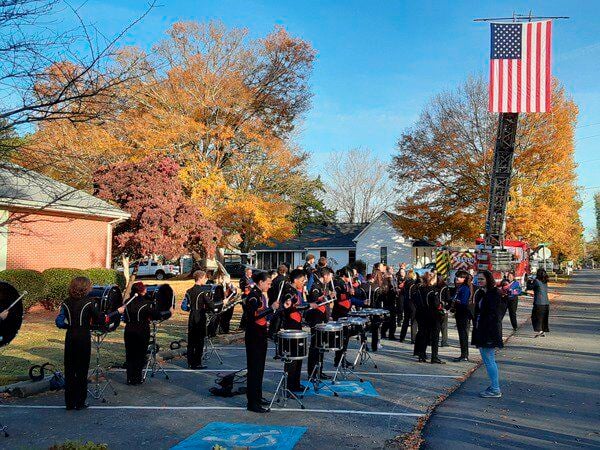 Northwest Whitfield High School band members provided a soundtrack for runners and walkers at the Forever Family 5K, including playing the national anthem, and race participants passed under an American flag lifted by a Dalton Fire Department truck. 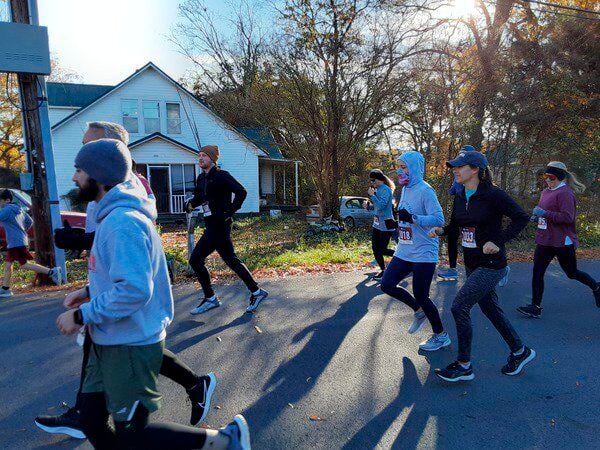 Running alongside his grandson, Brody Booth, was "the best part" of the Forever Family 5K, said Tommy Head.

Northwest Whitfield High School band members provided a soundtrack for runners and walkers at the Forever Family 5K, including playing the national anthem, and race participants passed under an American flag lifted by a Dalton Fire Department truck.

Despite not arriving home until almost dawn Saturday morning after driving the Ringgold High School football team to and from the Tigers' Friday night playoff game south of Atlanta, Tommy Head made it to The Levi Circle's Forever Family 5K in Tunnel Hill later Saturday morning to run alongside his grandson, 8-year-old Brody Booth.

"That's the best part," running with him, Head said. "I tried to explain to him we have to pace ourselves (for a 5K), but he's really excited about it, and he's got so much energy."

Saturday was the first time Head or Booth ran in the Forever Family 5K, Head said.

"We heard about it and wanted to be part of it."

The 5K was likewise a family affair for Macy Chastain and Dinika Swafford, who both ran in it for the first time.

"My little cousin loves to run 5Ks, and we don't get to see each other that often," said Chastain. "We run together, and I try to push her to do her best."

The run/walk winds through a Civil War battlefield, which is Jackson Beckler's favorite aspect.

"My grandfather is a big history buff, so I" grew up hearing about history like the Civil War, said the Northwest Whitfield High School freshman who has run this 5K several times. "I enjoy seeing that, and it's pretty cool."

Northwest alumna Kate Burton — home from college at the University of Georgia for Thanksgiving break — made her first appearance in this event since the only other time she did it, when "I was really young, like 7 or 8," she said. "I'd told my mom I wanted to start running again, and she told me about this race."

"A lot of these people are my friends, and I've grown up with them," including her dear friend "since preschool" Shelby Woods, who was one of the volunteers, Burton said. "Everyone here is really family-oriented."

Burton has been running shorter distances — a mile or two — in Athens on a semi-regular basis, and "I thought I'd try three miles again," she said. Fortunately, it's "a low-pressure (run)."

The race, which, as always, started and concluded at the Family Life Center at Tunnel Hill First Baptist Church, is a fundraiser for The Levi Circle (levicircle.org), which assists foster and adoptive families, raises awareness about adoption and foster care, and raises funds to help adoptive families, said Renee Griffin, who founded The Levi Circle more than a decade ago.

The nonprofit partners with the state Division of Family and Children Services and other agencies to help bring about foster placements, and also provides financial and emotional support to families during the adoption process.

"I enjoy (this run), and this is where I go to church, so I want to support it," Beckler said. Despite cold conditions — the temperature hovered around 40 degrees — "you've just got to push through it and get through it as quick as you can."

Northwest Whitfield High School band members provided a soundtrack for the runners and walkers, including playing the national anthem; race participants passed under an American flag lifted by a Dalton Fire Department truck; and members of Harley-Davidson Club 2114 led the race through Tunnel Hill.

"Harley-Davidson is a huge sponsor, and we have incredible volunteers and sponsors," Griffin said. Despite the COVID-19 pandemic, "we've raised more money this year than any previous year, which is amazing."

"Every time in the Old and New Testament it talks about orphans, it also mentions widows — we need to take care of the vulnerable in society — (so) we're excited about that."