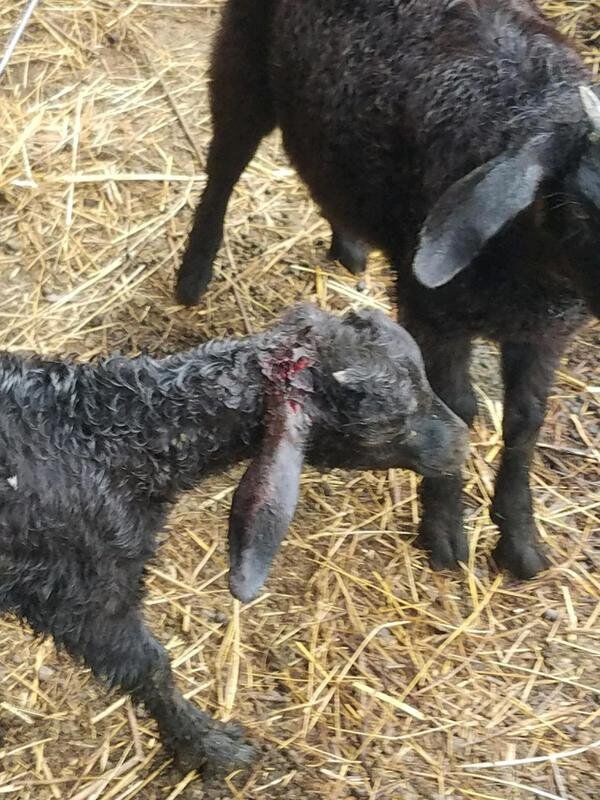 This young black Spanish goat avoided being killed by dogs, but was bitten on the ear, according to Bernard Kenemer Jr. 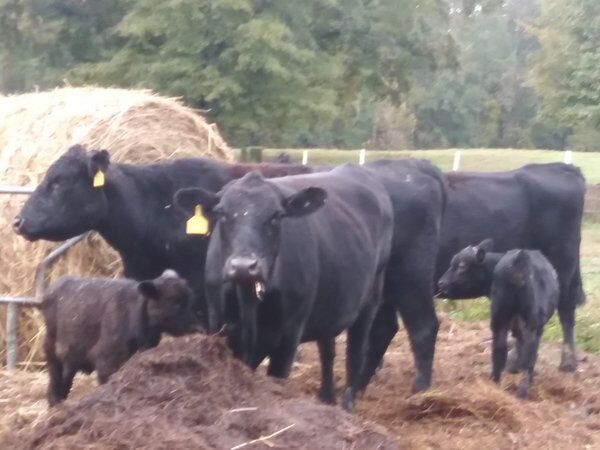 Bernard Kenemer Sr. believes these calves are also vulnerable to attacks by dogs at his family's Tibbs Bridge Road-area farm. 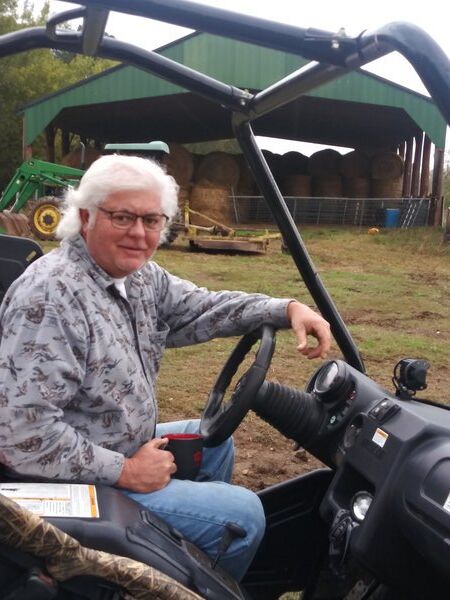 Bernard Kenemer Jr. tries to keep an eye on his goats and cows, but says he can't be everywhere day and night on his family's 120-acre farm. He believes dogs are behind the killing of around 50 of the family's black Spanish goats.

This young black Spanish goat avoided being killed by dogs, but was bitten on the ear, according to Bernard Kenemer Jr.

Bernard Kenemer Sr. believes these calves are also vulnerable to attacks by dogs at his family's Tibbs Bridge Road-area farm.

Bernard Kenemer Jr. tries to keep an eye on his goats and cows, but says he can't be everywhere day and night on his family's 120-acre farm. He believes dogs are behind the killing of around 50 of the family's black Spanish goats.

Bernard Kenemer Jr. became alarmed after finding one of his black Spanish goats mangled to death on his family's 120-acre farm bordered by Tibbs Bridge Road and the Conasauga River. Then it was another, and another, and another. He blames dogs in the neighborhood.

"I can't see way down on the (river) bottoms, I can't be everywhere at once," said Kenemer, who also manages an adjoining 190-acre farm. "I don't know that dogs don't come across the river, but I don't think that's the case because I've been tracking them. We've lost around 50 goats to dogs."

However, the suspected canines are elusive, and he hasn't caught any of them in the act of killing his goats. On a recent trip to his property in this agrarian corner of southeastern Whitfield County he cited his credentials to a reporter. A camouflaged rifle was between them in his rolling four-wheeler as he talked over the roar of the motor.

"I've been to continuing education classes on wildlife, nature and the land," Kenemer detailed. "We also participate in the federal CRP (Conservation Reserve Program) for river properties administered by the Farm Service Agency in conjunction with the Clean Water Act. It includes establishing a buffer, and our neighbors are involved. We own about one mile of river front (property). These farmers around here, they do take care of the land. This land is about as pristine as you can get to be close to a city."

At one time, Kenemer had "the finest herd of black Spanish goats in the Southeast, and they were seed stock," he stated. "That means we sell to different people who continue breeding them. They're brush goats -- they'd come in here to feed (by the river) and keep the bank cleaned off by eating the weeds, then they fertilize the ground. It's twofold, weed control and fertilizer.

"Then the cows eat the grass. The goats only compete with about 30 to 40% of forage to the cows, so it's a great marriage. So with 100 head of goats, you can see how they keep it cleaned out. Everything rotates."

Kenemer steered the four-wheeler around to where some cows were munching on hay.

"That calf right there is very vulnerable, because it's down here with just a few cows, not the herd," he pointed out. "That little calf will be lucky to live; we have to be here with it, watching it. The dogs are doing the killing, then the coyotes come and eat (the carcasses) later. The reason I can say that is I've seen the coyotes with my own eyes."

Occasionally, the river will flood and take down their fences, and the goats may get out. Recently, some of the goats drowned when they got stuck on the river bottoms and wouldn't cross the open field for fear of the dogs, Kenemer said.

"They wouldn't come back to the pole barn, eight of them," he relayed. "I can take you down there and show you their carcasses. If I'm up at the barn working, or at the other barn, the dogs get on my goats down here (by the river) or up there (away from the river) in the early morning or at dusk at night, and I don't have a snowball's chance in hell (of seeing it), and they're killing them. One morning they killed three right here on the bank of the river. I've got pictures."

The family was poised to make a profit on the sale of their seed stock goats at a recent Spanish Goat Association sale in Murfreesboro, Tennessee.

"This ain't no hobby -- if you do the math on that sale, I lost at least $20,000," Kenemer said. "We've lost 49 to 50 head. All were seed goats, some nannies, some billies. We carry good fencing for livestock, but a dog can get in. Somebody said, 'Why don't you shoot 'em?' I'd love to, but I can't be everywhere. We've shot them in double-digits, but they're still coming. This neighborhood has domestic dogs, and some of them kill our goats just for sport."

Ken Robertson is also a farmer in the area, and has "had bad trouble with dogs before."

"I've had them to chew the cow's tail off and chew the cow's ear off before they were born," he said. "They weren't even born, they were still in the cow while it was being birthed. I've had pigs before, and come in from work and have eight or 10 pigs chewed up from dogs. So dogs can do a lot of damage."

In 2018 and 2019, Kenemer Jr. called the law, according to the Whitfield County Sheriff's Office, which handles domesticated animal calls but not reports of wild animals.

He was asked if he knows who owns the dogs.

"No, if I did I'd be trying to get some money out of them," he replied. "Whitfield County is supposed to have a leash law."

Bernard Kenemer Sr. said he'd been out in the field looking around and would have to call his son.

"They can run fast," Kenemer Jr. added. "I shot at one 12 times with an AR-15 and still couldn't hit the dang thing. It's just unbelievable how many dogs come off people's porches to go kill a chicken or a goat."

"They ate the eyeballs out of one goat that was still alive," Kenemer Sr. revealed.

Kenemer Jr. produced a video on his phone of when he was video calling a public official while preparing to kill a severely-wounded goat.

"This is one I just found on the ground, it's still alive," he says in the video. "They injured it and left it for dead; now it's infested with maggots. It's going to die, we can't save it. You can see it; it's another cost, a little old nanny that I have, they bring about $300. But in this case, you realize they're ain't nothing I can do. You hear this sound right here (cocking a gun), and I don't like it."

He turned off the video before showing the shooting of the goat.

Capt. Clay Pangle with the sheriff's office said he has received complaints from the Kenemers regarding their goats. He was asked about putting out traps for the dogs.

"We've not been able to locate the dogs at all," he said. "It's some of my officers' beliefs that it may be coyotes, just because of where he lives with his property running adjacent to the river out there. A trap would be his best bet because they said they saw some dogs on the side of the road, and he didn't know for sure if that was part of the group causing the damage to his livestock out there or not. Even with those dogs, we couldn't get close enough to catch them. It's sorta hard for us to just shoot dogs on the side of the road.

"He's been advised it's his livestock and if he sees something happening to them, he can shoot (the dogs or coyotes) if he has to. He's raising these goats as part of his farming business, and he absolutely has the right to do that."

Are there any other complainants in the area, Pangle was asked.

"Not that I'm familiar with," he replied, "nothing recently besides him in that area. The majority of the complaints are from him and his property. My suggestion to him -- if it's going to be coyotes, and that's what we're leaning toward -- is they're a nuisance animal pretty much anywhere in the United States, and you can pay people to hunt them or do it for free for sport. Or get DNR (the state Department of Natural Resources). We're just not equipped to handle wild animals like that. If it's domesticated animals running at large, they were either born in the wild and the ones we see won't come to us, so we're sorta at a standstill on the limitations of what we can do at this time."

Pangle said the county does have a leash law, and potential criminal penalties outside a civil lawsuit would be tied to a "domesticated animals running at large" ordinance that would be heard in Magistrate Court.

"We understand we may lose one to a coyote ... But (the coyotes) eat it, they consume it," Kenemer Jr. said. "The dogs kill for sport."

He then turned philosophical.

"The farmers here work together; they work from sun up to sun down," he said." And yet for as hard a work as we do, we come in and find six or seven or eight of our livestock dead. It takes a God-fearin', Bible-totin', gun-carryin' man that makes him do something he don't want to do (kill dogs). You ride through here and see what's happening, and it'll bring you to tears.

"However, it can't be all (the county's) fault. They can only do what they can do … every last one of us gotta eat. We all need God every day. We need a doctor, we need a lawyer, we need a policeman. But there's somebody else we need -- God made a farmer. And we need that farmer three times a day. America needs to hear that once again. They need to hear that they need to keep their dogs up, that they're not helping the food chain by letting their dogs run wild. They also need to hear that if their dogs cross that farmer's fence, you can bet you might never see it again."

Robertson summed up, "Once a dog starts killing, he don't stop."

"When they get that taste for blood in their mouth, they never lose it," Kenemer Sr. said.