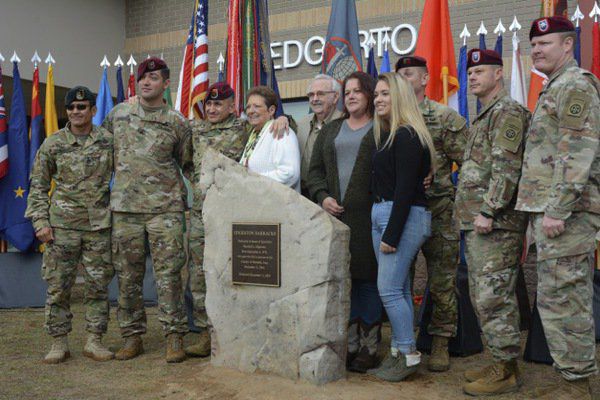 Family members and friends of the late Sgt. Marshall L. Edgerton are pictured after a ceremony to name Fort Gordon's largest barracks in memory of Edgerton, a 1995 graduate of Northwest Whitfield High School who died in Iraq in 2003 in a suicide bombing in which his response prevented mass casualties in and around a dining facility. 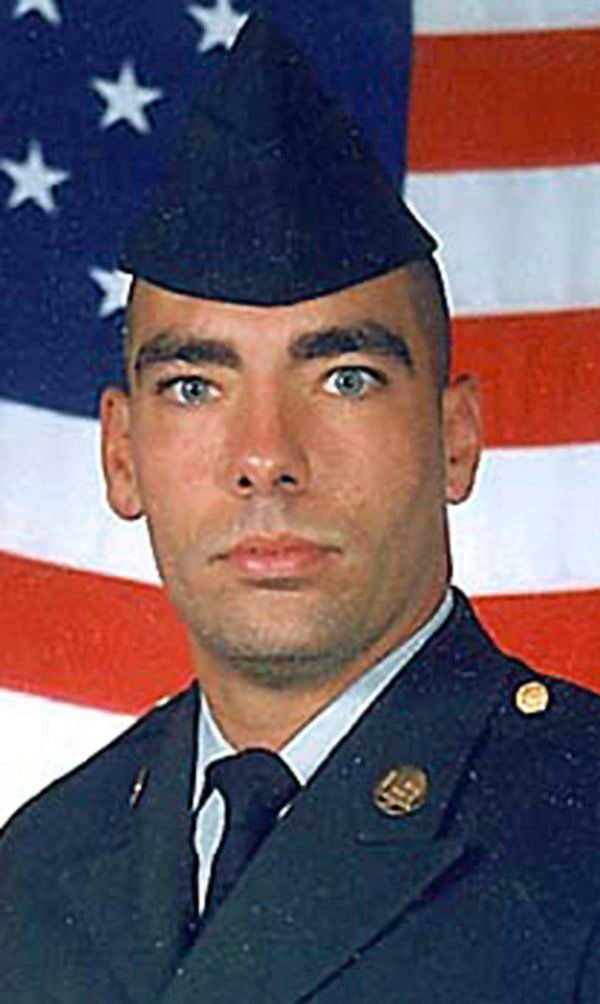 Family members and friends of the late Sgt. Marshall L. Edgerton are pictured after a ceremony to name Fort Gordon's largest barracks in memory of Edgerton, a 1995 graduate of Northwest Whitfield High School who died in Iraq in 2003 in a suicide bombing in which his response prevented mass casualties in and around a dining facility.

The U.S. Army has honored a Whitfield County native who perished in Iraq by naming a building after him at Fort Gordon, near Augusta.

A new barracks for members of the Army's signal corps has been named for Sgt. Marshall L. Edgerton, who was assigned to a signal battalion with the 82nd Airborne Division at the time of his death in December 2003.

Just days before coalition forces captured Iraqi president Saddam Hussein, Edgerton, 27, boarded a pickup truck with three Iraqis inside to escort them onto a military base in Ar Ramadi, Iraq. According to news reports from the time, Edgerton apparently realized quickly the truck contained a bomb, and his shouts are credited with warning others and keeping the truck from reaching a dining facility full of soldiers. He was the only American killed in the blast. Fourteen others were wounded.

An investigation would later find the truck had been rigged with four artillery shells weighing about 100 pounds each. The suicide bombs were concealed by the pickup’s gas tank.

Edgerton was a 1995 graduate of Northwest Whitfield High School, where he participated in football and wrestling.

Edgerton left behind a wife, a daughter and a son. His son, Hunter Edgerton, is now 23 and himself a sergeant with the 82nd Airborne. He was among the family members attending the ceremony naming the barracks for his father.

“Even before my dad passed away, I was like, man, that's what I want to do,” said Hunter Edgerton, according to a story of the Defense Visual Information Distribution Service. “I want to join the Army and I want to jump out of an airplane.”

According to the story, "He repeatedly watched a VHS tape when he was six years old of his father jumping from a training tower on Sicily Drop Zone on Fort Bragg."

The story notes the father volunteered to deploy in support of Operation Iraqi Freedom.

"After unsuccessfully having a conference room in the G6 office of the 82nd Airborne Division Headquarters named after his father due to naming convention issues, Edgerton received an email from Fort Gordon officials two weeks ago. They were wanting to name a signal corps student barracks facility after his father on the anniversary of his death and wanted the Edgerton family to attend," the story said.

“This came out of nowhere, because a year and a half ago I was trying to do that,” said Hunter Edgerton. “So, it's pretty awesome. Almost in a bigger way.”

“I had the pleasure of serving with him (Marshall L. Edgerton) in the best division in the Army, the 82nd Airborne Division,” said Brig. Gen. Christoper Eubank, the commandant of the U.S. Army Cyber School. “I knew him more by reputation than personally, because I didn't need to know him personally to know what kind of man he was.”

"Eubank said that Edgerton gave everything for the sake of his teammates and that as soldiers come through the Edgerton Barracks they will read his story and see the impact they can have as a signal soldier," the story said. "He said Edgerton demonstrated what leaders want their soldiers to become: a selfless leader."

Marshall L. Edgerton was promoted to the rank of sergeant posthumously, and received a Bronze Star and Purple Heart, the story said, noting his awards and decorations also include the Army Commendation Medal, Army Achievement Medal, Basic Parachutist Badge and the Signal Association’s Gold Order of Mercury.