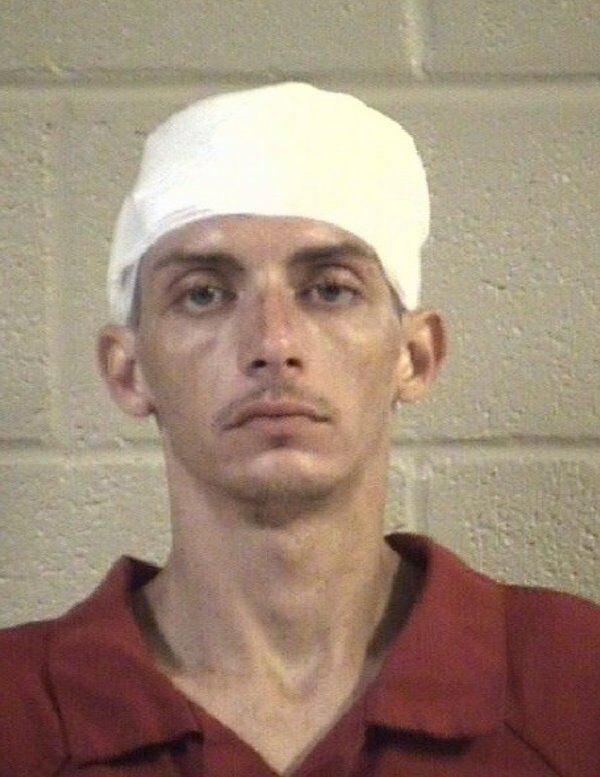 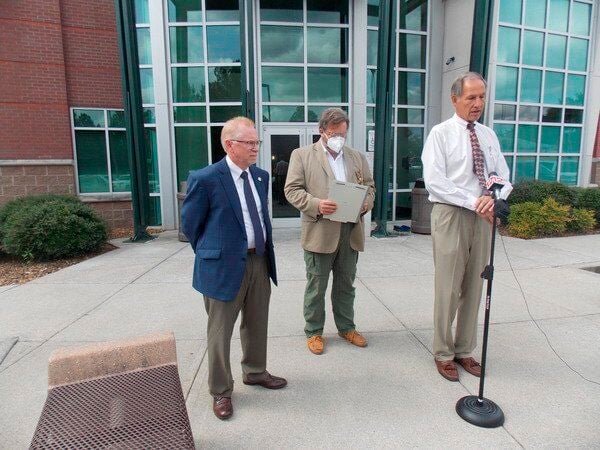 A Gordon County homeowner was in Erlanger Hospital in Chattanooga and a Texas fugitive was in the Whitfield County jail Thursday, following an exchange of gunfire Wednesday during what law enforcement is calling an attempted home invasion.

Whitfield County Sheriff Scott Chitwood, Gordon County Sheriff's Office Chief Deputy Robert Paris and Joe Montgomery, special agent in charge of the GBI's Calhoun office, held a press conference Thursday at the Whitfield County jail to discuss the capture of Dalton Potter, 29, who was apprehended in Resaca Wednesday. Potter had been on the run for three days after shooting a Whitfield County deputy Sunday night after being stopped on I-75.

Chitwood said that after the exchange of gunfire between the homeowner and Potter law enforcement "set up a very, very large perimeter in the northern Gordon County, southern Whitfield County area, and we were very fortunate to take him in without incident. He was taken to Hamilton Medical Center to be checked out. He was treated and released."

Chitwood said Potter received a "grazing" wound to the head from a bullet.

Paris said the civilian suffered "non life-threatening but serious wounds" and is expected to recover.

Potter was found by officers around 10:30 p.m. Wednesday hiding in a swampy area near Bandy Lake in Resaca in Gordon County.

Paris said there is no indication Potter had any help during the three days he was on the run but said he clearly had "some survival skills" since the area he was hiding in was "rough terrain."

Potter was driving a white Chevrolet Tahoe pulling a utility trailer around 11:40 p.m. Sunday, when he was stopped by Deputy Darrell Hackney, according to Chitwood.

"The initial stop was because of a utility trailer that was being pulled by the Tahoe had been reported stolen out of the Chattanooga area," said Chitwood. "We had a BOLO (be on the lookout) on that, had a confirmation with a tag reader and initiated the stop."

During the stop, Potter fired numerous gunshots at Hackney from inside his vehicle. Hackney was struck by gunfire, but his ballistic vest prevented serious injury.

Hackney and responding Whitfield County Deputy Adrian Gomez returned fire, but Potter escaped, driving south on I-75. Potter wrecked the truck, and the stolen trailer was located on I-75 South near the Whitfield/Gordon county line and the West Nance Springs Road overpass.

Chitwood said Hackney suffered bruising and "blistering" wounds. He said this is Hackney's off week in his work rotation and he is expected to return to work as scheduled next week.

A second suspect in the shooting, Jonathan Hosmer, 47, was arrested Monday.

The GBI said the trailer contained explosives that will be destroyed by its bomb disposal unit.

Chitwood said they do not know why the two men were in the north Georgia area or why they were hauling explosives. He said they "heard rumors" they were headed to Miami, Florida, but their "purpose and destination" are still unknown.

"It is still an ongoing investigation," Chitwood said.

District Attorney Bert Poston said he isn't sure when Potter will have his first court appearance. He said Whitfield County Superior Court wasn't in session Thursday and won't be today.

The GBI reports that Hosmer and Potter are both wanted in Texas for larceny and theft of over $2,500.

Chitwood said Potter will probably remain in Georgia until his cases is resolved before being returned to Texas because the charges against him in Georgia are more serious.

Chitwood thanked all of the agencies that helped in the search for Potter, noting there were over 100 law enforcement officers taking part.

"We had about 20 agencies on the ground yesterday and last night. We had federal agencies, state agencies represented," he said.

Montgomery said that is a credit to the cooperation and working relationships between local law enforcement agencies.

He said it also reflected the seriousness of the charges against Potter.

"If he's willing to shoot at a law enforcement officer during a stop, you can imagine what he will try to do, what he did try to do, to a civilian," he said.