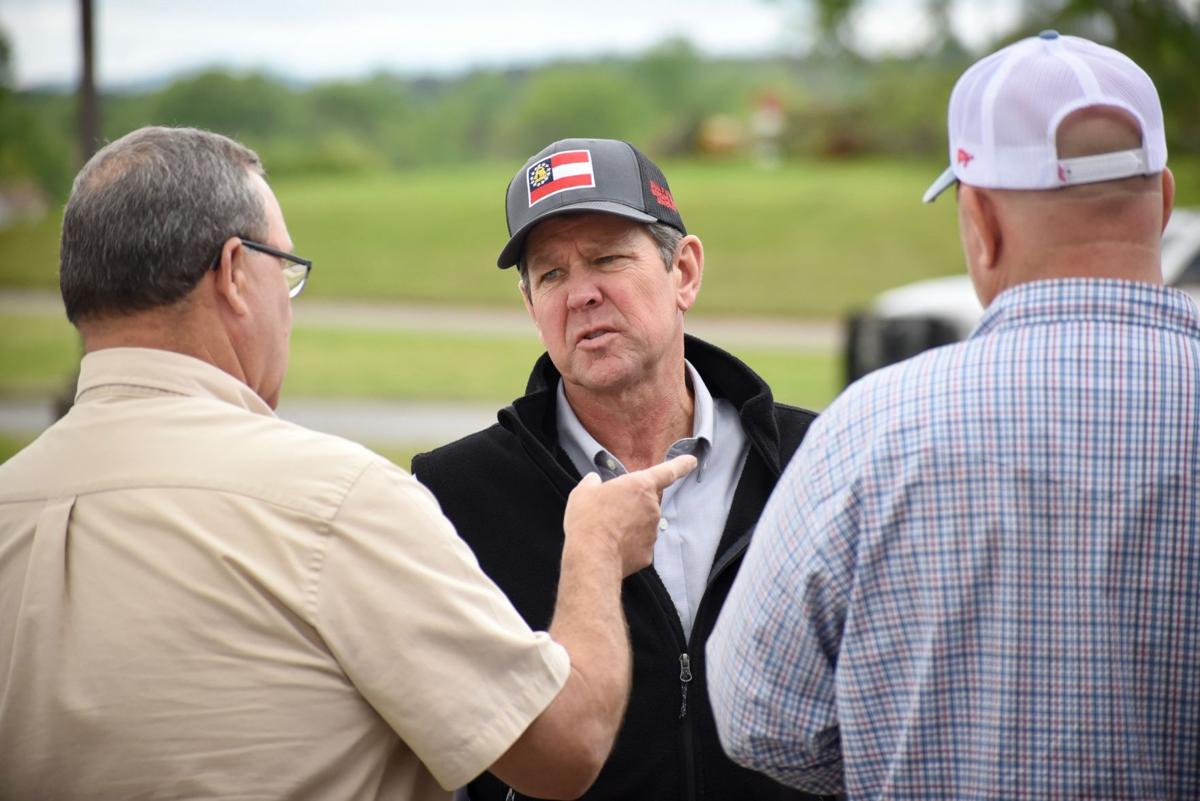 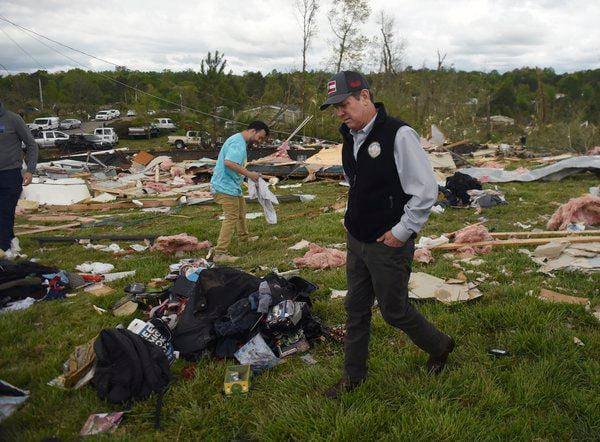 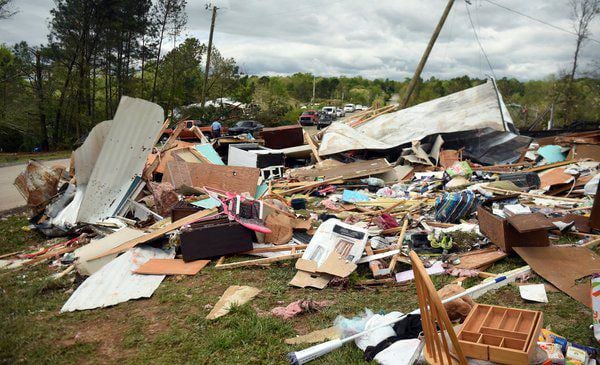 The remains of a home are strewn about off Ridgeview Lane in Murray County. 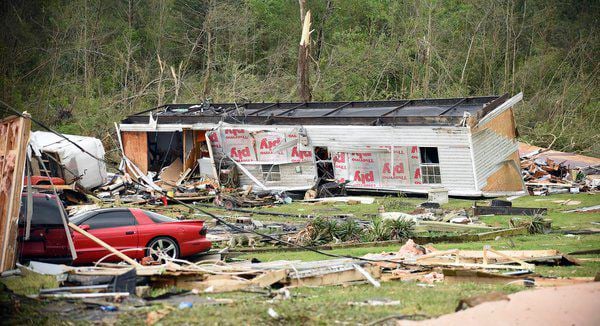 A home lies in ruins off Deer Park Drive in Murray County.

The remains of a home are strewn about off Ridgeview Lane in Murray County.

The people of Murray County have suffered a "double whammy" following a vicious round of storms that killed at least seven people and injured at least 23, Gov. Brian Kemp said on Monday, but they are "resilient."

Kemp toured the damage from the storms in the north end of the county, arriving shortly before noon by helicopter at Bagley Middle School. He had earlier declared another statewide state of emergency following the storms that he said "went from one end of the state to the other."

Asked by a reporter what he told the Murray Countians he met with, Kemp said, "I told them we’d be praying for them, No. 1. These are resilient people up here, they’ve gotten a double whammy, a lot of them out of work because of things going on with the coronavirus, and now to have this storm hit them, it’s hard on them. But they’re like I am, they’re glad that their families are all right and they’re OK, and that’s not the case for some of their neighbors."

The damage covered about a five-mile track, and the deceased "were in multiple homes as far as I know," said Dewayne Bain, director of the Murray County Emergency Management Agency and the county's fire chief. He said the fatalities were in two mobile home parks north of Norton Bridge Road. The mobile home parks are "back to back."

The county coroner said the names of the deceased could not be released until family members were notified.

The injured were being sent to AdventHealth Murray, with some diverted to other hospitals, including Hamilton Medical Center in Dalton and Erlanger in Chattanooga.

Bain said he didn't know how many people are without homes.

A large area north of Highway 76 was without power.

The National Weather Service had surveyors on the ground. But as of 4 p.m. on Monday they still had not determined whether the damage was caused by a tornado or strong winds.

Officials were struck by the widespread nature of the damage.

Murray County Sole Commissioner Greg Hogan recalled a tornado from "when I was 12 or 13, back in the 1970s. We had a tornado come through that did some damage. But it was nothing like this. I have never seen this sort of devastation before."

Early Monday afternoon, Murray County Sheriff Gary Langford said emergency workers were still in “search and rescue” mode as they went door to door digging through leveled homes and debris that was scattered across large fields.

“We’re thankful that we’ve not had no more fatalities than we’ve had, and we still may have some,” Langford said. “We’re still in search and rescue at this time. Everybody that can, give us prayers up here, especially for all of the folks here that’s lost families.”

Langford couldn’t say for sure, but he believes from the paths of devastation that it looked like “two different tornadoes that hit, maybe a small one and maybe a large one.” He added officials won’t know for sure know until the National Weather Service finishes its investigation.

“Like the governor said, it’s devastating,” Langford said. “I watched the news last (Sunday) night and I was watching it come towards our county. It looked like it had dropped down in speed. I thought we were going to be OK, then in a few moments we had devastation.”

Langford thanked Kemp, the Georgia State Patrol, the state Department of Natural Resources, the Georgia Emergency Management Agency, sheriffs from five surrounding counties that sent deputies to Murray County and ordinary citizens who helped — and are still helping — with the extensive damage throughout the northern part of the county.

State Rep. Jason Ridley of Chatsworth, who was with the governor, said the storm went right behind his house, doing some damage, but nothing compared to what some of the other places in the county experienced.

Ridley said the governor's declaration of a state of emergency will make a great deal of state aid available.

Kemp said in a press release, "We are praying for those who lost loved ones overnight and the families dealing with severe storm damage. In coordination with private-sector partners, multiple state agencies — including the Georgia Emergency Management and Homeland Security Agency, Department of Public Safety, Department of Natural Resources, Department of Transportation and Georgia Forestry Commission — are working hard to restore power, clear debris and provide necessary assistance to families across the state. This morning, I also spoke with FEMA Administrator Pete Gaynor, and I greatly appreciate his offer of federal assistance as we work to rebuild and recover from these storms."

Asked by a reporter if he was surprised there weren't more fatalities, Kemp said, "Fortunately, the people knew it was coming, even though it’s like one guy just told me, there wasn’t anywhere where they could go, they just had to make the best of a bad situation. When you look at these (houses) it’s a miracle anybody lived through it."

Kemp said he had talked with "probably over a dozen sheriffs this morning in all parts of our state. We’ve got up here in northwest Georgia, over in Upson County, in Jesup, Liberty County is bad, I just saw a report on Milledgeville ... "

"Well, it’s certainly been a lot, but we’ve been through a lot before in our state and our country and we have resilient people," he said. "We’ve got a lot of people on the ground and local officials, and we’ve had the state operations set up, and we’re going to do everything in our power to help people."