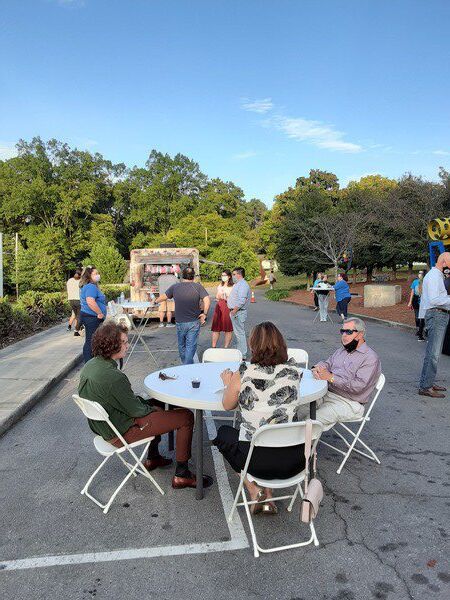 People gathered outside the Creative Arts Guild on Thursday for a final "farewell'' to this year's Festival, as well as to munch on grilled cheese sandwiches from the Speakcheesy food truck. 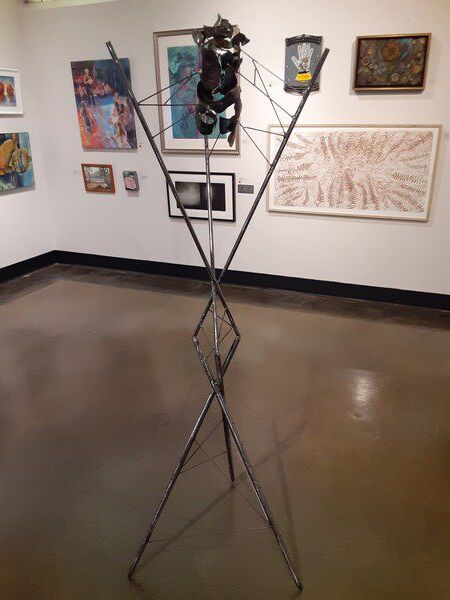 John Wilson's sculpture "That Which Can't be Seen" received the Patron Choice Award during Festival last month at the Creative Arts Guild.

People gathered outside the Creative Arts Guild on Thursday for a final "farewell'' to this year's Festival, as well as to munch on grilled cheese sandwiches from the Speakcheesy food truck.

John Wilson's sculpture "That Which Can't be Seen" received the Patron Choice Award during Festival last month at the Creative Arts Guild.

The Creative Arts Guild put this year's Festival in its rearview mirror and bid adieu to accompanying indoor exhibits on Thursday in deliciously "cheesy" fashion.

"It's a final 'Hurrah' and 'Farewell' to Festival," said Amanda Brown, Guild executive director. "We did it, and we rocked it out."

The public was invited to take one last look at exhibitions inside while munching on grilled cheese sandwiches from Rome's Speakcheesy food truck. Works by the Georgia Clay Council, photographer Michael Largent and oil painter Jean McDonald Coker will soon take center stage at the Guild, with an opening celebration on Friday, Nov. 6.

This year's Festival, Sept. 18-20, included the unveiling of the enlarged and remodeled Robert T. Webb Sculpture Garden, which has added a dozen new acquisitions to bring the total to 50. The garden is open year-round from dawn to dusk with no admission fee as part of the Guild’s commitment to making the arts accessible to everyone, and in 2017, the Atlanta Journal-Constitution rated it as one of the six best places in the South to see outdoor sculpture.

"I'm actually more excited now than I was 10 years ago" when the sculpture garden was established, because "with 50 works, it's a destination," Webb, the garden’s eponymous founder and curator, explained last month. "It's become a draw, and the additions we've made only inspire future opportunities."

"I wasn't able to make it to Festival, but I really want to see the new sculpture garden tonight," Lauren Joyner said on Thursday. "I'm looking forward to that."

The Guild brought in Speakcheesy last year for a Festival farewell, too, but it was during the lunch hour, and even though "it worked really well," the Guild wanted to try dinnertime this year, Brown said. That gave children an opportunity to attend after school and other adults, who may not be able to leave work during the day.

Adam Sapp and Lindsey Smith attended Festival and returned to the Guild on Thursday for Speakcheesy.

"We're relatively involved with the Guild, so we wanted to come out and support (it)," Sapp said as he snacked on a three-cheese sandwich from Speakcheesy. "It is cheesy, and the soup is really good."

"You can't go wrong with that," she said. "I'm a gluten-free person, but I can still have this."

This year's Festival was a success, even with tweaks due to the new coronavirus (COVID-19) pandemic, such as more virtual content, Brown said. "We were really pleased at the end."

The increased digital materials were a hit with the public, she said, noting, "It let Festival go on beyond Festival weekend."

"They did a really good job with Festival, especially Friday, which was mostly outdoors, and nice and spread out," Smith said. "Everyone was a safe distance, and you were able to see everything because there weren't the (usual) traffic jams inside."

"I've heard from a lot of people they liked this (version) better," Joyner said. "It used to be very crowded inside that night."

Overall, Festival "didn't feel that different," said Sapp, who bought a couple of pieces Festival weekend. "It was just a little more spaced out."

The art inside the Guild for this edition of Festival was "one of the best" yet, said Joyner, who has been involved with the Guild essentially "since I was born." It is "nice to see the Guild and Festival grow and evolve to what it is today.''

For art inside the Guild's galleries, John Wilson's sculpture "That Which Can't be Seen" received the Patron Choice Award.

"I've known (Wilson) for five or six years, and it seems like he's been working on that (piece) the whole time," said Savannah Thomas, gallery director for the Guild. "He had a very clear vision of that piece."

The art inside the Guild drew plenty of viewing and purchasing attention during Festival, and "we've had a good stream of people continue to come in" since, Thomas said. "There's no better socially-distanced (activity)."

Joyner appreciates the precautions Guild staff have taken during the pandemic to protect patrons, she said.

"I like that I can come to these events and still feel safe because it's spaced out."

The Guild received plenty of support during and after the Festival from people who were happy to have an opportunity to get out and socialize, but to do so safely, Brown said.

"We had a lot of (protocols) in place, but the biggest thing is people followed the guidelines."

"The isolation has been really hard for a lot of people, and (Festival) brought joy, which we need," she added. "People do want to gather, and everyone pulled together to make this work."