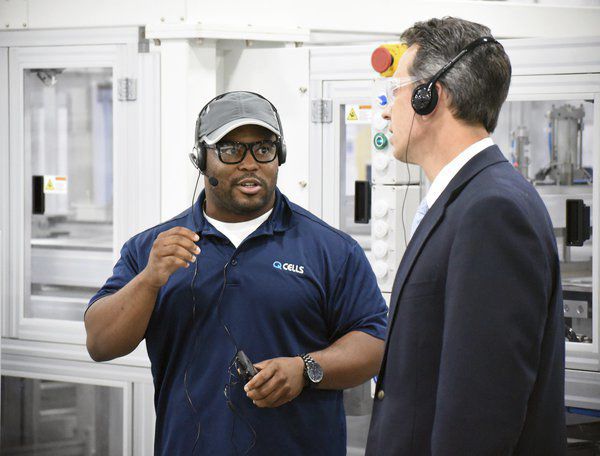 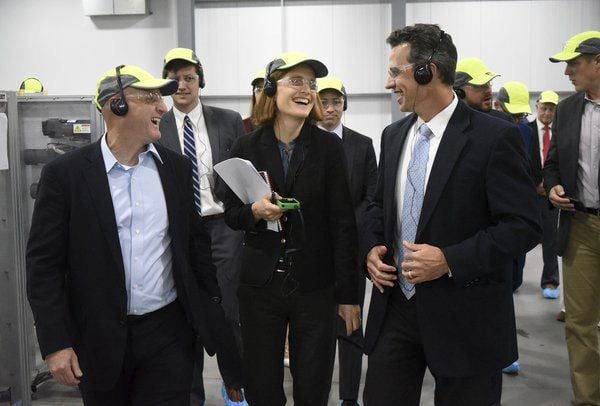 Daniel Simmons, left, and Becca Jones-Albertus, both with the U.S. Department of Energy, talk with U.S. Rep. Tom Graves during a tour of the Hanwha Q Cells factory in Whitfield County. 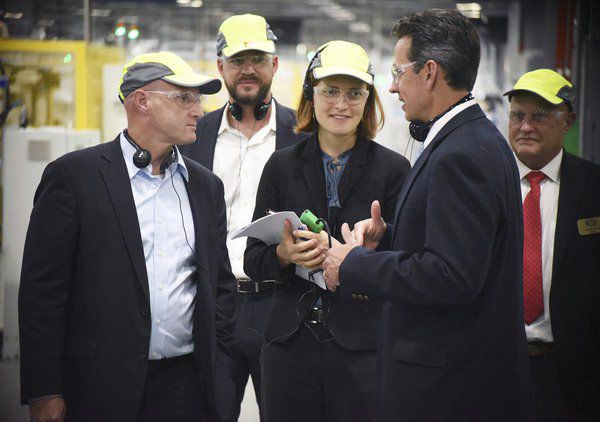 Daniel Simmons, left, and Becca Jones-Albertus, both with the U.S. Department of Energy, talk with U.S. Rep. Tom Graves during a tour of the Hanwha Q Cells factory in Whitfield County.

The Hanwha Q Cells solar module manufacturing plant opened in the Carbondale Business Park in January and shipped its first products in February.

"We've continued to grow each month," said Lisa Nash, human resources manager for Hanwha Q Cells America. "We are almost at full capacity. We are manufacturing over 10,000 modules a day."

Nash spoke during a tour of the facility by U.S. Rep. Tom Graves, R-Ranger, and other federal, state and local officials.

"We are really excited," said Carl Campbell, executive director of the Dalton-Whitfield Joint Development Authority. "When Hanwha came here, they promised us 500 jobs in three years. They actually hired over 600 in about six months, and today, we found out they employ over 750 people."

"This is a really exciting investment here in Whitfield County," he said. "It diversifies the industrial base. I've brought officials here from the (federal) Department of Energy as well as state economic development officials."

Graves said the northwest Georgia area's experience in manufacturing, developed through the textile and floorcovering industries, could help it attract more such development.

"We've heard from the Georgia Department of Economic Development how well situated this region is for additional manufacturing, especially high-tech manufacturing," he said. "It's really exciting to see this happening."

In July, GE Appliances announced a new logistics center about a mile south of the port in Crandall. The company cited the port as a reason for locating the center in Murray County. Local officials say the center will open late this year or early next year and employ 100 to 110 people.

The officials visiting the Hanwha plant said they were delighted at how clean and high-tech the facility, which uses self-driving lifting devices, is.

Dalton Mayor Dennis Mock noted that not all of the jobs the plant provides are on the factory floor.

"There's also a lot of people upstairs, sitting at desks doing things to make sure the factory workers can do their jobs," he said.