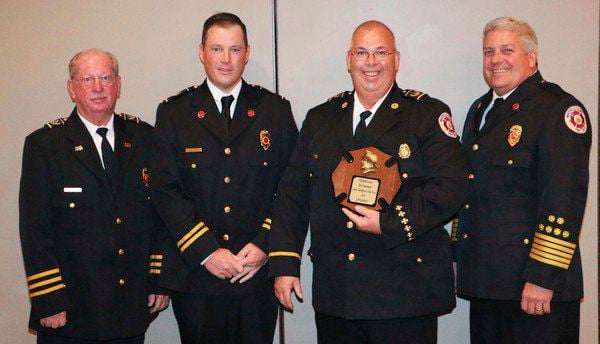 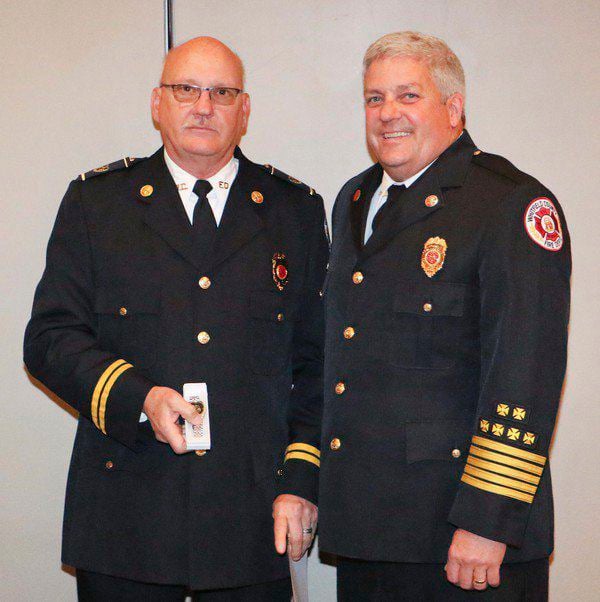 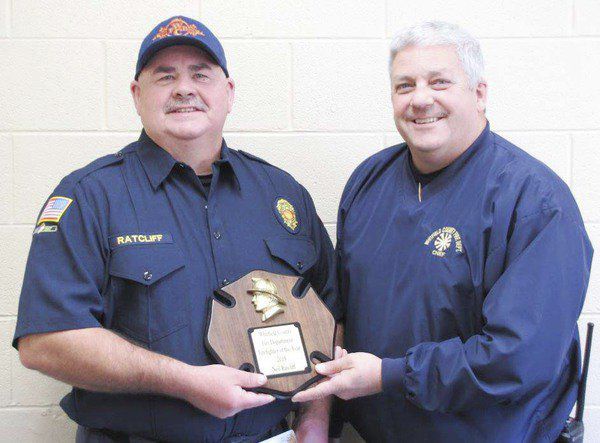 Firefighter of the Year: From left are Capt. Neal Ratcliff with Chief Ed O'Brien. 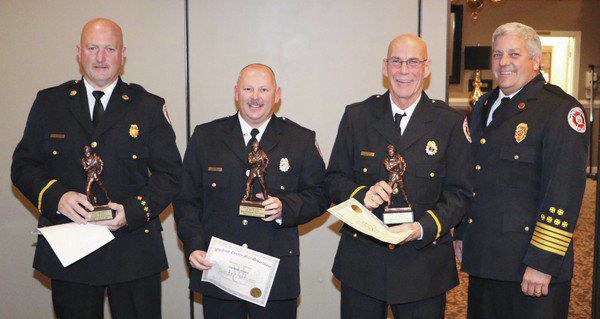 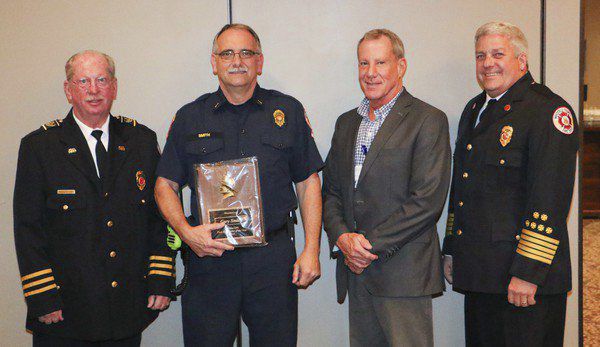 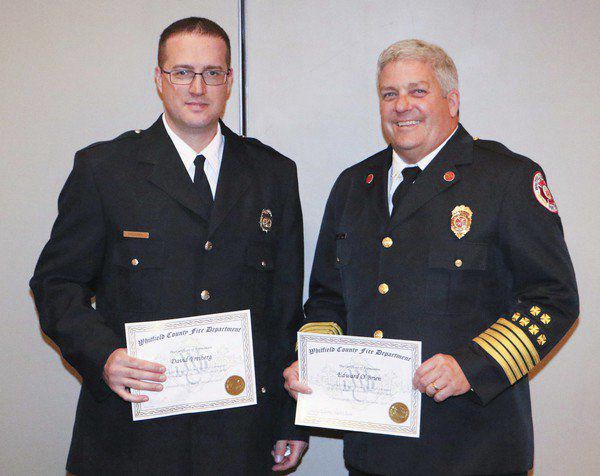 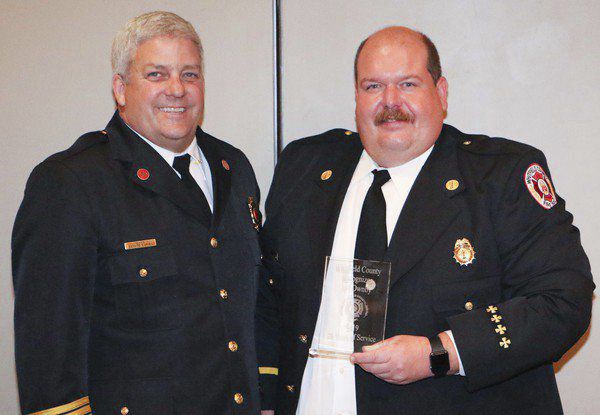 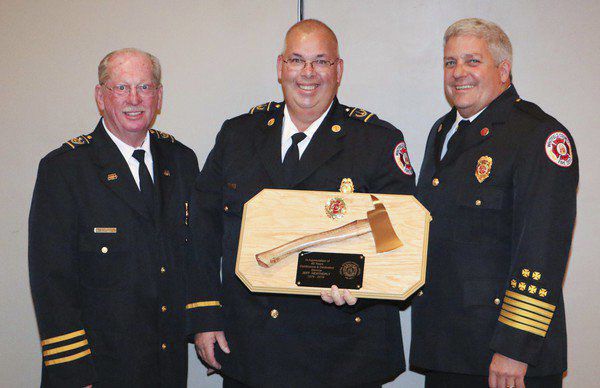 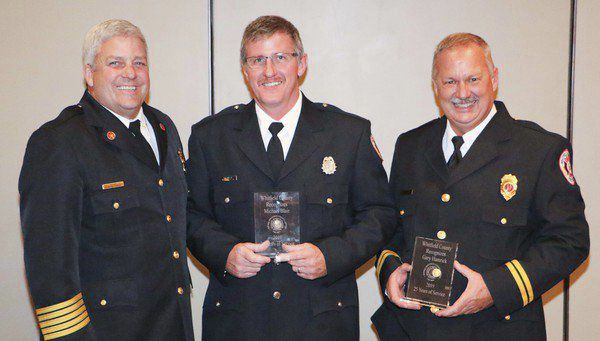 Firefighter of the Year: From left are Capt. Neal Ratcliff with Chief Ed O'Brien.

Fresh off a year that included the opening of their 12th station and the arrival of two new fire engines, Whitfield County firefighters received recognition for their efforts during 2019 at the 42nd Annual Firefighter's Appreciation Banquet on Nov. 5 at the Dalton Golf & Country Club.

"Our department is now 42 years old and going strong," Chief Ed O'Brien told the crowd. "2019 has had its share of difficult times, but as we look back, it was another busy and productive year for the department and the citizens we protect."

He reflected on a ribbon-cutting ceremony in October for the department's 12th fire station, on South Riverbend Road, an expansion that will lead to lower insurance rates for homeowners within five miles of the facility.

O'Brien also said that the department had put two new Pierce fire engines into service and hired the remaining staff for Station 12, upping the number of personnel to 110.

"Each shift has 34 personnel assigned to protect and serve the public," the chief said. "Who would have ever thought that staffing would be this high?"

O'Brien said county firefighters are averaging more than 450 calls and 700 responses each month, and through the day of the banquet had already run 4,726 alarms and 7,080 individual responses.

"All the latest and greatest equipment is great," he said, "but the items that make me the proudest is our service to the citizens that is above and beyond handling emergency incidents."

O'Brien pointed to several such programs, including the Clown Posse, which in its 19th year promoted fire safety to more than 4,000 elementary school students; Baseball Buddies, with firefighters and their families volunteering at the Miracle Field; Boot Drive, which collected a record $22,972.89 in four hours on one October Saturday; and Santa in Uniform, which will provide a special Christmas to less fortunate children on Dec. 17.

O'Brien, a 32-year veteran firefighter, also talked about "The Brotherhood."

"This day and age," the chief continued, "we need The Brotherhood more than anything. We must continue to light that fire in our new personnel and make sure that the fire continues to burn in our veterans. If you have The Brotherhood inside you, it's your duty to keep it alive."

County Board of Commissioners Chairman Lynn Laughter also addressed the firefighters earlier in the banquet, saying, "I was thinking, if I had to describe a Whitfield County firefighter in one word, what would that word be? Maybe respect, admiration given by others, which can also mean appreciation or honor or high esteem. Maybe dependable would be the one word, someone you can count on, faithful to the task, always there when needed. Maybe first, as in first responder, there at the beginning, leading. Then I thought one word can never be enough to describe my respect and admiration for your dependability as firefighters and first responders. I am proud of you as Whitfield County firefighters for what you do and for what you are willing to do."

"As most everyone in this room is aware, Whitfield County Fire Department has grown leaps and bounds over the past few years," Battalion Chief Nathan Callaway said before presenting the award to Heatherly. "In my opinion, the increase in full-time staffing has become the greatest asset to the department. This year, there were more than 96 personnel eligible to receive Career Firefighter of the Year. With this many personnel, it is not an easy task to pick just one person.

"I think what stood out about this year's recipient is that he's always willing to take on any task, no matter how mundane, and see it through to the end, no matter how long it may take. His attention to detail provides administration with peace of mind that any job assigned to him will be concluded accurately and on time. As a veteran member of the department, he has a willingness to share his knowledge with anyone that's willing to listen. He enjoys training other members of the department both through assisting the training division and by setting up impromptu drills with neighboring stations."

Honored as Firefighter of the Year (given to the top pay-per-call member of the department) was Capt. Neil Ratcliff.

Command staff also helped hand out service awards to Heatherly and several other firefighters, including:

"One of the things I do want to stress," Radeker said, "in an equipment-heavy world, where brand names, expensive monitoring equipment and expensive life-saving equipment are available to us, we can't forget the human touch. We can bring all the equipment in the world to the aid of our patients, but without the people to make it work, it's useless."

Margaret Evans, age 86, of Dalton, GA, passed away on Wednesday, April 1, 2020, at her home. She was preceded in death by her parents, Hulk and Rebecca Ann McCarter and her husband, Charles David Evans. She was a member of Cedar Valley Church of God. Survivors include her daughter, Patricia …