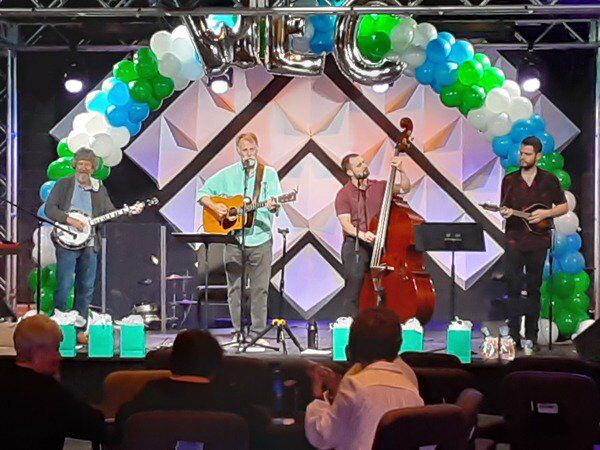 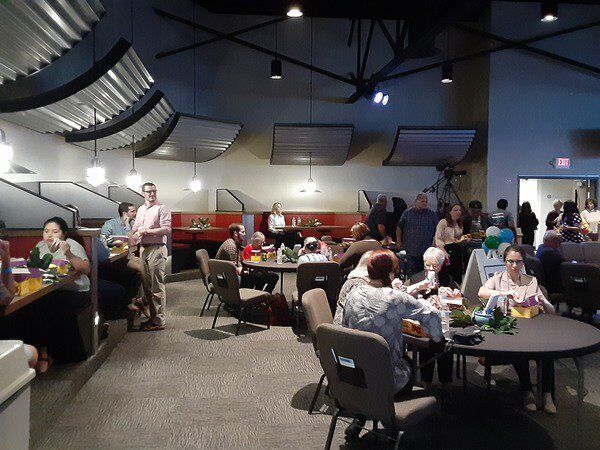 Supporters of the Women's Enrichment Center enjoyed food from Moe's Southwest Grill, music by the Earl Brackin Band and fellowship with one another Tuesday night inside Rock Bridge Community Church's Stage 123.

Supporters of the Women's Enrichment Center enjoyed food from Moe's Southwest Grill, music by the Earl Brackin Band and fellowship with one another Tuesday night inside Rock Bridge Community Church's Stage 123.

Though the threat of rain forced the Women's Enrichment Center's "Meet in the Street" off the street and inside Rock Bridge Community Church's Stage 123 Tuesday night, the move couldn't diminish the enthusiasm of the supporters of the center.

"They save lives," said Emily Day, a member of Salem Baptist Church, which supports the center in numerous ways. "We support them 100%."

Salem's Sunday school committed nearly a decade ago to help the center financially and with volunteers, said Day's husband, Shane, a catalyst for the Sunday school. "We've done drives for diapers and wipes, and I've put shelves in and floors down" as part of a remodeling effort at the center.

Wipes and diapers are "necessities babies need all the time," according to Renee Rector, the center's executive director. "We give out more than 1,000 packs of wipes and diapers per year" to hundreds of clients.

In addition to drives and donations, "one of our members, Robert Bates, leads a prospective father's class" for males in need of guidance, Shane Day said. "Those young men need mentoring, too."

Salem also provides mentors for mothers and mothers-to-be as part of the center's mom-to-mom mentoring group, said Donna Brinkley, Salem's choir director. "Some of our people are in the mom-mentoring group" at the center, and "they're doing a ton of volunteer work."

The mom-to-mom mentoring group is a pivotal initiative, Rector said. The center also held a graduation and cookout this summer to celebrate clients who passed through stages of the center's parenting classes.

Those who participate in the center's parenting classes earn points they can use to shop in the center's second-floor store, Rector said. The center also provides limited ultrasounds under the supervision of a doctor, and staff can refer clients to other resources for anything the center can't provide.

Jim Brinkley, Salem's worship pastor, was pastor of Rocky Face Baptist Church when he first became acquainted with the center and Rector, and he's been "really supportive of what they're doing" ever since, he said. "I've been part of this for 12 years or so."

Though Sandra Smith only recently became aware of the center, she was quickly impressed by the services it provides and the impact it makes, she said.

"I know some young women who have used the (center) and how much it meant to them."

"I know they do baby showers," for example, for "some women who might not normally get one," she added. "That's really special for them."

The center "is a place they can go for help, and we want to support it," said Sheila Aaron. "A lot of those ladies don't have the support at home they need," but they receive it at the center.

"We become emotional support for our (clients)," according to Rector. "A lot of them are new to town, (and/or) they don't have a lot of family or friends."

The center has a bilingual staff member dedicated to helping Spanish-speaking clients, and more information about the center can be found online at https://www.wecnorthga.org/ or https://www.facebook.com/WECNorthGA/, as well as by calling (706) 278-1050, Rector said. The center offers pregnancy testing and consultation, as well as parenting classes for men and women before and after pregnancy, all free and confidential.

The center can provide free services because of generous supporters, like those in attendance at Tuesday's event, which featured music from the Earl Brackin Band and food from Moe's Southwest Grill, said Susan Beck, vice chair of the center's board.

"The work we do at the center is life-changing, awesome and powerful, but it's only possible because you support us (as we) enrich, educate and empower women and families."