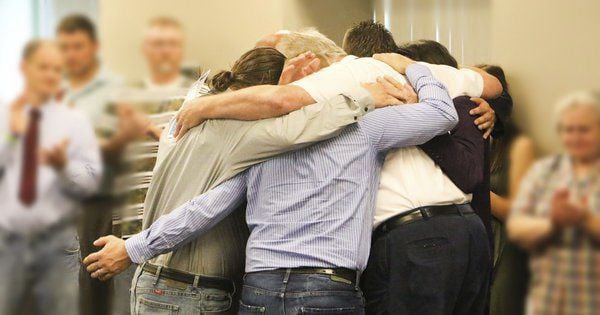 Marshall Lynch of the Drug Court treatment team praised the efforts of the five male graduates before joining them in an emotional group hug. "If you're broken, guess what?" Lynch said. "You're at the most important part of your life; that's when God wants to change you the most." 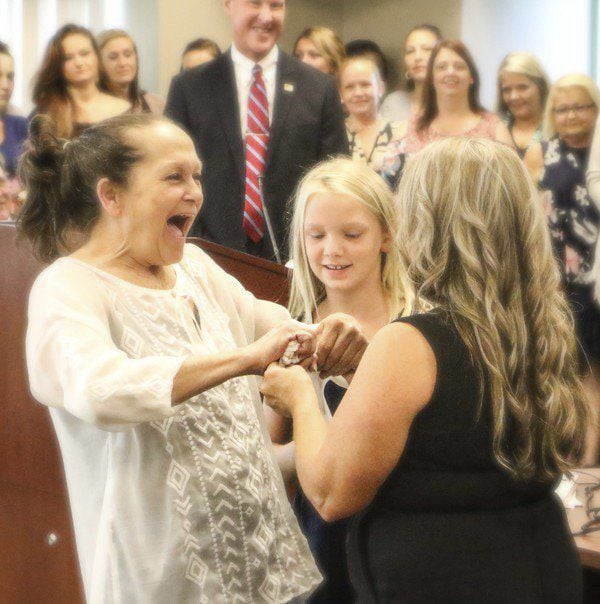 Her mother and niece can't help but celebrate enthusiastically as they help Andrea tear up her old mug shot photo after she received her Drug Court diploma. 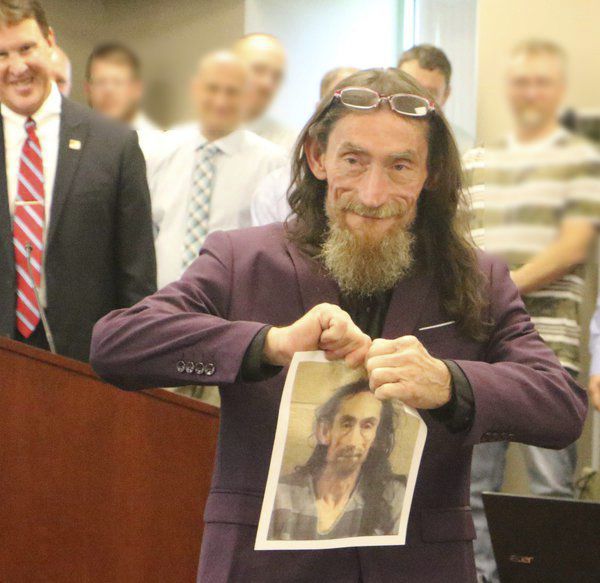 As Judge Jim Wilbanks and friends look on in the background, Drug Court graduate Don rips up his mug shot, moments after he had told the audience he had been in and out of rehab and jail for more than 40 years. "Never give up!" he says to others who may be battling similar demons. 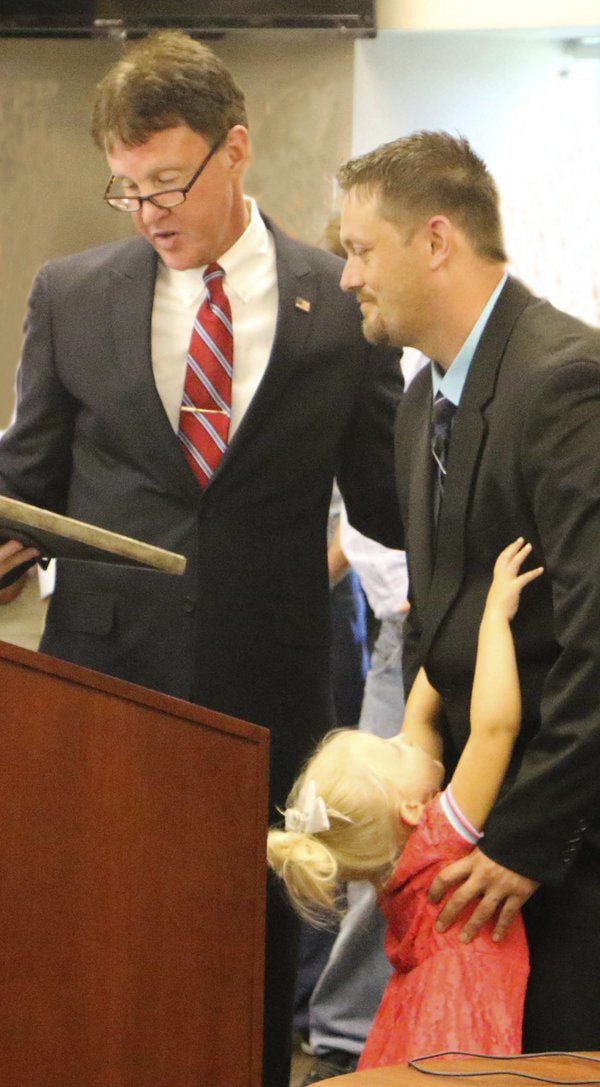 Judge Jim Wilbanks reads the graduation plaque before he presents it to Drug Court graduate Rodney, being hugged by his daughter. Putting families back together again is a primary goal for the program, the judge says.

Marshall Lynch of the Drug Court treatment team praised the efforts of the five male graduates before joining them in an emotional group hug. "If you're broken, guess what?" Lynch said. "You're at the most important part of your life; that's when God wants to change you the most."

Her mother and niece can't help but celebrate enthusiastically as they help Andrea tear up her old mug shot photo after she received her Drug Court diploma.

As Judge Jim Wilbanks and friends look on in the background, Drug Court graduate Don rips up his mug shot, moments after he had told the audience he had been in and out of rehab and jail for more than 40 years. "Never give up!" he says to others who may be battling similar demons.

Judge Jim Wilbanks reads the graduation plaque before he presents it to Drug Court graduate Rodney, being hugged by his daughter. Putting families back together again is a primary goal for the program, the judge says.

The first time Don went to jail, he was 13. Now 58, he has been in and out of treatment rehabs and lockups pretty much his entire life.

That is, until he was invited to participate in the Conasauga Circuit Drug Court program in January 2017, when Don says his life began taking a drastic turn for the better.

"A message to others: Never give up! If you start thinking you cannot make it, reach out to someone, and remember, it does get better!" he said.

That heartfelt advice came in a letter Don wrote to Drug Court Judge Jim Wilbanks as part of the program.

Don and seven other graduates -- Andrea, Jenny, Sanna, Shannon, Gerry, Rodney and Steed -- read their letters not only to the judge but also to an enthusiastic audience full of supportive family, friends and other Drug Court participants during the 76th Drug Court graduation ceremony on June 27 at the Whitfield County Courthouse.

It was a day marked by reflection on how low their lives had once fallen and how high they have climbed since taking part in the rigorous program that Wilbanks has often called "the hardest thing" the participants will likely ever do.

"I told the staff this morning that these were some of the best letters I've seen," Wilbanks said at the beginning of the ceremony. "What I mean by that is these individuals today have been really transparent in these letters, and you need to listen to what they're going to have to say to you about where they came from because these are life-changing moments, not only for these people but their families and friends."

In her letter, for example, Sanna called the support of the Drug Court treatment team "amazing and uplifting," and she thanked members of the staff "for looking past my addiction to the person I was and that you knew I could be."

She recalled that she lost everything within the first six months of her addiction.

"I couldn't believe how my life turned out like this so quickly," she said, "and I didn't know how to stop it or help myself."

After being accepted into Drug Court in April 2017, Sanna admits she still had some "criminal thinking" and received her first sanction for violating the stringent rules of the program. The slip-up proved to be an eyeopener for her, though.

"Going back to jail made me realize I didn't belong there," she said. "I surrendered everything in there. I was experiencing every feeling, every ounce of pain now that I was clean."

With the help of the Drug Court team, she says her life now is "nothing but amazing."

"My husband and I have completed marriage counseling, we have our daughters back with full custody, we bought a house and a brand new 2019 SUV, I am working on getting back into school, I have a full-time job that I have maintained for two years, I have a sponsor that I keep very close, and my family is active in church at Crosspointe," she said.

Steed likewise praised members of the treatment team staff for their help, saying, "I truly believe God has a special place in his kingdom for people like these who uplift when we are beat down. Those who encourage the discouraged, help the helpless, guide the lost, strengthen the weak, give hope to the hopeless, and defend, not despise, us. People who give kindness when no one else will, push us when we are stuck, and love us when no one else will. I owe you all a debt I can only repay by being the man you helped me become."

He said his life "looks so much better today than I ever could have imagined" now that he has "peace and joy in my heart, a wonderful group of brothers I can depend on in my recovery, an awesome network of men and women who care about me, a family who stands beside me in whatever I do and the support of a loving church."

Graduating from Drug Court doesn't just happen without a lot of effort. Just ask Jenny, an addict for 18 years.

"Upon entering the program, I really was not ready for something different," she said. "I just was not ready to give up my attitude, and three months after coming in the program I was sentenced to RSAT (Residential Substance Abuse Treatment)."

After being away for 11 months at RSAT, Jenny says she returned to Whitfield County with a whole new attitude, willing and ready to do something different.

She offered this advice to other addicts still battling their demons: "You are braver than you believe, stronger than you seem, and smarter than you think. So keep fighting and never give up!"

That was advice Rodney needed to hear, too. He says he spent much of his life not caring if tomorrow ever came and he was satisfied playing the role of a victim because of childhood abuse.

"All I worried about was getting high and the thrill of the crimes I committed to get more drugs," he said.

Deep down, however, Rodney says he wanted to be "a good husband, father, and just a good man in general."

But he says he always believed he was too far gone to try to change, "but by the grace of God and the consequences of my crimes, I was led to the only place that could show me a better way."

Not that it was easy.

After his first year in Drug Court went "really well," his recovery took a detour when the staff discovered he was breaking the no-contact rule with his mother and he was sanctioned to two weeks in jail.

"In all the times I have been incarcerated, that two weeks was the worst!" he said. "I constantly thought about my actions, and how it was affecting my wife and kids. I came out of that sanction 100 percent surrendered to my program of recovery. My life really began to change!"

Rodney calls his life today "a miracle" -- thankful to have his wife and kids back in his life, a driver's license after 12 "long" years, and "the greatest brothers in recovery." He's also grateful to have been clean for two-and-a-half years, to have his GED and a job at Mohawk for nearly two years, and to be a member of a 12-step program.

"I love my life today," he said, "and I owe it all to God and this program! In short, Drug Court not only made a bad man good, they also made a dead man live again!"

Gerry admits he entered the program as a dishonest man, with authority issues, and full of anger and distrust. Like his fellow participants, his road to a better life required much work.

"My first day I was like most people -- overwhelmed and scared," he said. "It took a little while and a few sanctions before I totally gave in to the program. When I did, though, the changes became clear to my family and the good friends that never gave up hope for me. For the first time I started being the man my family and friends trust today."

Shannon served every day of a three-year sentence when he was 18 years old, but that incarceration as a young man still didn't turn his life around. When he finally entered the Drug Court program years later, he had been sitting in jail again for almost four months for a second drug possession.

"I had two reasons for entering Drug Court, to have a better life and to see my kids," he said, "but I was told to have either of these, I would have to work for it. I thought, how hard could this be? This assumption was about 75 percent wrong. First, I had to be honest about who I am and my life. When I was able to do this, the changes began."

Shannon says he is "proud to stand here" as the man he never thought he could be.

He's been employed at the same place for more than two years, has checking and savings accounts, and is enjoying "a great relationship and friendship" with his wife and stepdaughter.

His message to others who may be facing similar challenges in their lives: "If I could leave everyone in this room with a message, it would be to not let your past control your future. Everyone has the potential to do great things in life!"

Marshall Lynch, a member of the treatment team, praised the graduates for their hard work.

"I was driving over here today, and do you guys realize I have the most blessed job any man in this universe could ever have?" he said, surrounded by the five male graduates. "It's not work. It is work sometimes, but it's not work. And I love who they are, and you know, here's the most important thing to remember: If you're broken, guess what? You're at the most important part of your life; that's when God wants to change you the most. That's when he loves you the most."