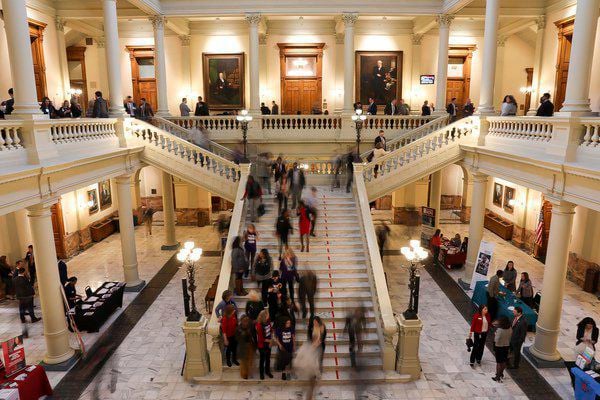 The Capitol Building bustles on Monday, the first day of the 2020 legislative session, where the budget is expected to dominate decision making. 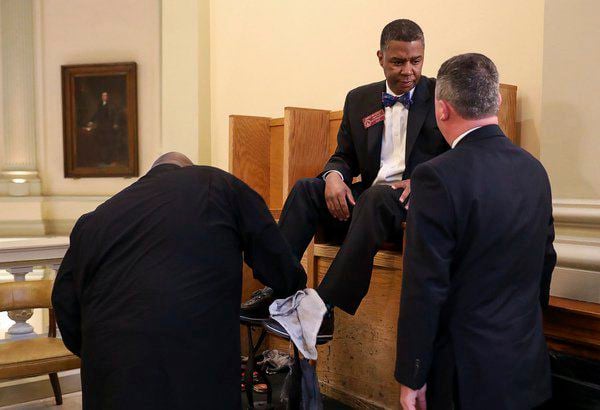 State Rep. James Beverly, D-Macon, gets a shoe shine and chats with a fellow lawmaker on the first day of legislative session in the Capitol Building in Atlanta on Monday.

The Capitol Building bustles on Monday, the first day of the 2020 legislative session, where the budget is expected to dominate decision making.

State Rep. James Beverly, D-Macon, gets a shoe shine and chats with a fellow lawmaker on the first day of legislative session in the Capitol Building in Atlanta on Monday.

ATLANTA — Lt. Gov. Geoff Duncan and the Senate Majority Caucus both told the press that gambling is not on their priority list this year.

During study committees, lawmakers lobbied in favor of putting the legalization of sports betting, horse racing and other forms of gambling on the ballot as a Constitutional Amendment — with voters ultimately making the decision.

But in press conferences on the first day of legislative session, Monday, Duncan and the Senate Majority Caucus both nixed the idea and cited low support among constituents for legalization.

"I've not had a line of senators over the last nine months outside that office trying to take the door off the hinges to talk about gambling ..." Duncan said during a pre-session press conference. "I just haven't seen that overwhelming push for gambling here in the state of Georgia — I certainly haven't heard it out as I've traveled around the state."

In the same press conference, Duncan talked strategy for his first session as lieutenant governor. Health care — a main priority of Duncan's when he served in the House — will again make the top of his list, he said.

"The federal government is in a place where they're leaning more on the states and we want to be a state that creates solutions," Duncan said. "Some of the things you'll see from us in health care will be price transparency and also the right to shop. We're going to continue to work in ways that allow us to really build a system in this state that allows consumers or patients to know how much their health care costs — well before they get home from the hospital."

Duncan drafted the Rural Hospital Tax Credit, which took effect in 2017. The program allows residents and companies to make state tax deductible donations up to $10,000 to any of the 58 eligible rural hospitals across Georgia. The credit is capped at $60 million total — each hospital is able to achieve up to $4 million in donations annually.

A state audit of the program requested by the House Appropriations Committee found that the "donations to eligible rural hospitals did not necessarily go to the most financially needy" and that the third-party vendor charged an "administrative fee" that exceeded the programs predetermined expenses.

"I think there's opportunities to modernize and reform that bill, we want to make sure that the entire tax credit is used in those rural areas," he said.

Another state audit, revealed that the state's film industry received thousands in tax credits that it should not have. While Duncan said the film tax credit will not go away anytime soon, the discrepancies need to be addressed.

"I have read the audit ... it's alarming at some of the information out of there," Duncan said. "I think there's an opportunity to create some significant improvements to make sure that farmers in South Georgia feel like the 200 plus dollars that each person is paying, each family for for that tax credit, they feel like they're getting an (return of investment) on it."

Duncan declined to answer many other questions from the press, saying proposals and specific legislation are under "discussion."

When asked if he had concerns over the governor's budget cuts stalling legislation — which has drawn criticism on the House side — Duncan said he is "certain" there is wasteful spending that can be cut.

"We have 40 legislative days to work through the budget and the two things I'll guarantee you is: we will pass a budget and it will be balanced, and I look forward to working with the governor and his staff on the budget process," he said.