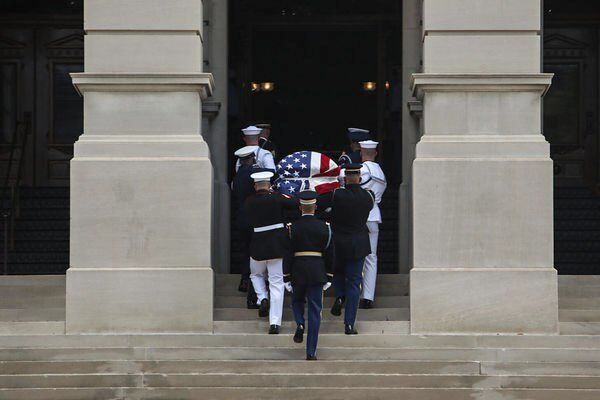 The casket carrying Georgia Congressman John Lewis makes its way into the Georgia State Capitol Building to lie in the rotunda on Wednesday in Atlanta. 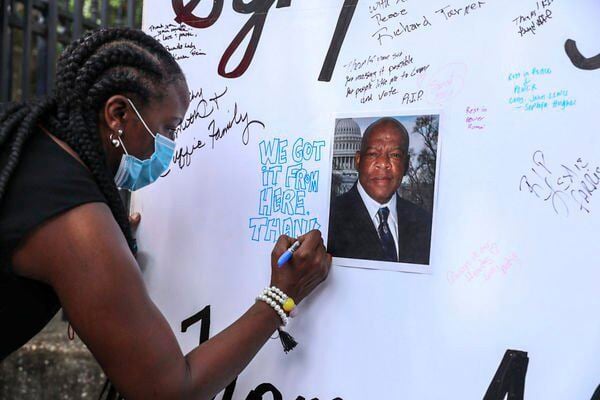 Mourners sign the "world's largest sympathy card" with condolences and memories of the late John Lewis on Wednesday in Atlanta.

The casket carrying Georgia Congressman John Lewis makes its way into the Georgia State Capitol Building to lie in the rotunda on Wednesday in Atlanta.

Mourners sign the "world's largest sympathy card" with condolences and memories of the late John Lewis on Wednesday in Atlanta.

ATLANTA — While lawmakers greeted the casket carrying the late Congressman John Lewis on the steps of the Georgia State Capitol, hundreds of people lined the sidewalks across the street to say goodbye to a man they considered a friend.

On the last stop of a long celebration of life — a journey from Alabama to Washington, D.C., and finally to Atlanta — Lewis lie under the Gold Dome Wednesday.

Although originally from Alabama, Georgia came to know Lewis as one of its own. The lawmaker was reelected to serve the 5th Congressional District 16 times.

Before he was laid to rest Thursday next to his wife, Lillian, who died in 2012, lawmakers and constituents mourned Lewis in the rotunda of the Capitol building.

A private ceremony for lawmakers and family hosted guests such as Martin Luther King III and his 12-year-old daughter, Yolanda King.

"At home in the 5th District, this legendary freedom fighter was a friendly neighborhood face, serving his constituents selflessly and with open arms,” Kemp said. "In our country’s most trying moments, Congressman Lewis taught us the lesson of joyful, steadfast commitment to ideals bigger than one man or one movement."

Rep. Karen Bennett, D-Stone Mountain, who is the head of the Legislative Black Caucus, called the memorial a “somber celebration” of Lewis who many called the “conscience of Congress.”

"Congressman Lewis was a gentle giant of a man who marched and prayed so that others could live their best life,” she said.

Rep. Calvin Smyre, D-Columbus, the longest serving member of the Georgia House, said Lewis’ death is as if “a giant redwood tree has fallen in the Georgia forest of life."

Before hundreds poured into the building and waited for their chance to pay respects to the Congressman, people in line shared stories of someone they considered their neighbor.

Nathan Knight, 73, cried while holding a picture of Lewis amidst the crowd.

“We’re here today because John Lewis fought for humanity — not just civil rights,” he said. “He was beaten down but he got back up. That’s why we’re all here today.”

Bruce Griggs traveled to all the stops on Lewis’ celebration of life tour with what he proclaimed the “world’s largest sympathy card” — an eight-foot-tall letter to the beloved civil rights icon.

On the corner of Washington and Mitchell streets, he beckoned visitors to sign their condolences.

“Today and everyday,” he said, “is in the honor of John Lewis."

Douglas Williamson, 78, of Dalton passed away on Wednesday, August 5, 2020. He was the son of the late Estes and Selma Williamson and was also preceded in death by his brother, Leon Williamson. Doug is survived by his sisters, Lois Cochran of Dalton and Deborah Williamson of Owatonna; niece,…