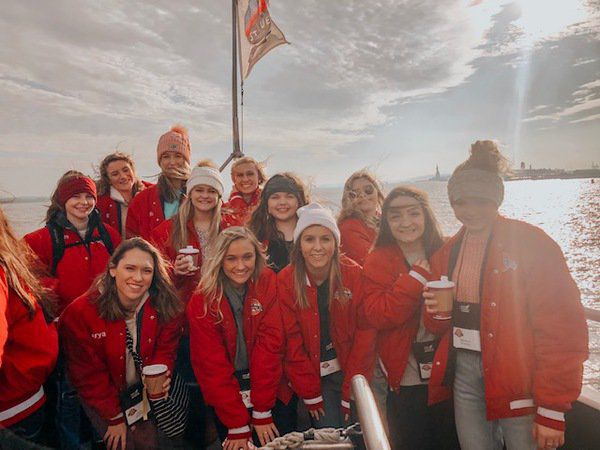 Members of the Murray County High School dance team visited the Statue of Liberty and toured the harbor on a blustery November day. 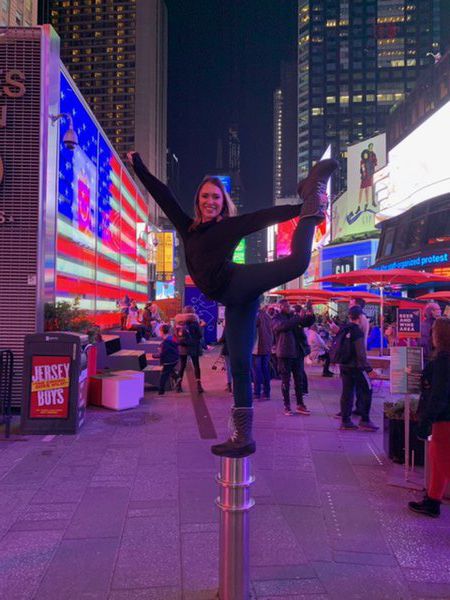 Darya Bryant, a member of the Murray County High School dance team, strikes a pose in Times Square during the squad's visit to New York City in November. 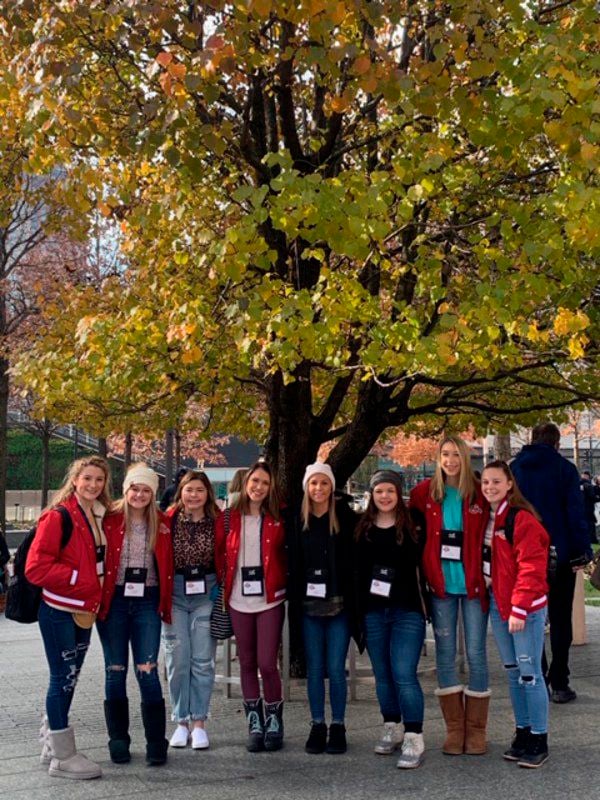 Members of the Murray County High School dance team pose in front of the Survivor Tree at the 9/11 memorial. 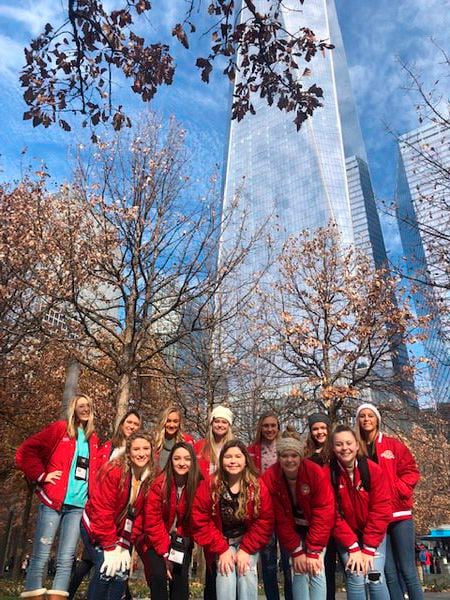 Members of the Murray County High School dance team visited the Statue of Liberty and toured the harbor on a blustery November day.

Darya Bryant, a member of the Murray County High School dance team, strikes a pose in Times Square during the squad's visit to New York City in November.

Members of the Murray County High School dance team pose in front of the Survivor Tree at the 9/11 memorial.

CHATSWORTH — In addition to performing in the Macy's Thanksgiving Day Parade, members of Murray County High School's dance team were able to visit One World Trade Center and the National September 11 Memorial & Museum, watch "Frozen" on Broadway and the Rockettes in Radio City Music Hall, and ice skate at Rockefeller Center during their holiday week in New York City.

"It was really great, a once-in-a-lifetime experience," said Tara Jones, who coaches the dance team and is a social worker for Murray County Schools. Between dancers and parents, the group numbered 25, and "I'm glad they got to experience this with their parents and each other."

Dancers Landri Sparks and Kennedy Ryan have been friends since seventh grade, and "we got to room together" on this adventure at the Hilton, said Sparks. Sparks was joined on this trip by her mother and aunt, and "now Kennedy, my mom, and my aunt are all best friends and love each other."

"They're the best," Ryan said with a laugh regarding her pal's mother and aunt. In addition, "I was a great roommate."

Senior Gracie Fenwick's room was a moveable feast, she said with a giggle. "Room 831 is the best, and we ordered Ray's Pizza" — a famous pizzeria in the city — "pretty much every night; by the end of the trip, they knew our room and number."

After performing in the Thanksgiving Day parade, the team dined together that evening at an Italian restaurant, said Sparks, in her fourth year as a member of the dance team. "It's hard to get that many people in a New York City restaurant on Thanksgiving, but we had fun."

Nearly 700 girls came to the city to perform as dancers in the parade, and they were recognized often in public during the week due to their blue or red jackets, Sparks said. "It was interesting (to see and meet) people (of) so many different cultures," especially considering Murray County "isn't a place with a lot of diversity."

The early days of the trip brought mild weather, with only light jackets or sweatshirts required, but, "of course, Thanksgiving Day, when they had to be in their costumes, it dropped down to 30," Jones said with a laugh. That morning, the dancers had to be up by 5:50 a.m. and left the hotel at 6:30 a.m. to head to the staging area.

They were able to see many of the balloons, floats and celebrities on floats, Jones said. "I know they were tired, but they had a blast," including getting photos with many of the individuals on floats.

They were yards away from a waving and friendly Jimmy Fallon, host of "The Tonight Show," at one point, said Ryan. She also got photos with several famous figures, including Ronald McDonald.

The Spirit of America's dancers, of which the Murray County High School ensemble was a part, "got to introduce Santa at the end of the parade, a big honor," Jones said. That also led to plenty of TV time, which "was a really neat experience."

They departed Nov. 22 and returned a week later — 17 hours each way by train — and their first two days in the "Big Apple" were devoted almost solely to practicing their dance routines, she said. "They worked hard, but it was so worth it, and I was very proud of them."

Practices were "exhausting" and "a lot to handle," but "seeing all those excited New Yorkers with their turkey hats on was cool," Sparks said. Their routine "went really well, and I couldn't have asked for anything better."

Murray County's dancers were able to get autographs from some members of the "Frozen" cast, and "it was magical to see the Rockettes in Radio City," Jones said. Ice skating in Rockefeller Center was also memorable, because "that's such an iconic spot you see in so many movies."

For Fenwick, a self-described "Broadway fanatic," the highlight of her trip was probably "Frozen," she said. Even those sitting in close proximity to her during the performance observed she was "really into it."

Though Sparks had been to the Big Apple several times, this was her first opportunity to see the Rockettes, and "I've always wanted to do that, since I was little," she said. In addition to the dancing, they offered a nativity scene with live animals, and the special effects were impressive.

All Rockettes must be between 66 and 71 inches tall, Sparks said. The tallest performers are in the center, while the shortest are on the ends.

Fenwick was dazzled by their synchronization, she said. "Even all of their waists are the same straight across."

The vast preponderance of the dancers weren't even born when America was hit by the tragic terrorism of Sept. 11, so learning that history at the memorial and museum "made a real impact on them," Jones said. They also marveled at the "breathtaking views" from the One World Trade Center observatory.

"I've been to that museum three times, now, and that's a museum you never get used to," Sparks said. "You learn more about 9/11 every time, and it's amazing."

Ryan echoed those sentiments, noting "it's different every time you go, and it (elicits) different feelings every time."

While Murray County's dancers are accustomed to places like Atlanta, a major American city in its own right, "that was nothing compared to the crowds in Times Square and how busy it was," Jones said. "The pace is a lot quicker in New York, but everyone we encountered was very nice."

New York "truly is the City that Never Sleeps," so it behooves visitors to "stay outside of your hotel room as much as you can, (because) you don't want to miss anything," Fenwick said. "If you have a chance to go do something, go do it."

The city's inherent bustle is part of the reason Sparks enjoys the reflecting pool at the 9/11 memorial and museum, she said. "There's something peaceful about it."

Spots for contemplation are rare in New York, but this is an opportunity to "take a breather," she said. "It's very calm and memorable."

They also dropped into Macy's flagship store in Herald Square, which has 2.5 million square feet of space and which is on the National Register of Historic Places and is a National Historic Landmark.

Fenwick certainly needed additional luggage to bring back everything she bought or received during her time in Gotham, she said with a laugh. "If you're going (to visit), bring an extra, completely empty suitcase."

Performing in the parade raised the dance team members' profiles considerably at school and in their community, Ryan said. "People saw it, and everyone was asking us questions" when they returned to Murray County at the end of November.

Fenwick was even spotted by an employee when she went to Taco Bell a week later, she said. "Getting recognized is fun, and I was happy."

They felt appreciation from their community when they performed their parade routine during a December tree-lighting ceremony in Murray County, Fenwick added. "We had our little five minutes of fame."

It's actually "humbling to see everyone get so excited," Sparks said. "You don't know how much support you have until it really shows."

Dan Farrar, age 78, of Cohutta, passed away Friday, February 21, 2020, at Hamilton Medical Center. He was the son of the late Albert and Freda Farrar and was preceded in death by his son, Mark Farrar. He was a member of the Peach State Tractor Club and a member of Salem Baptist Church He is …