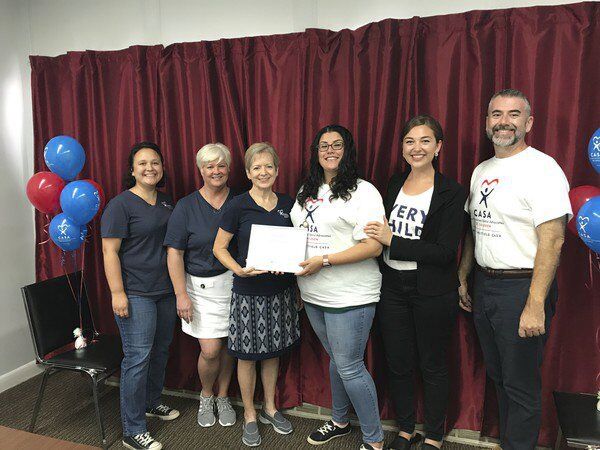 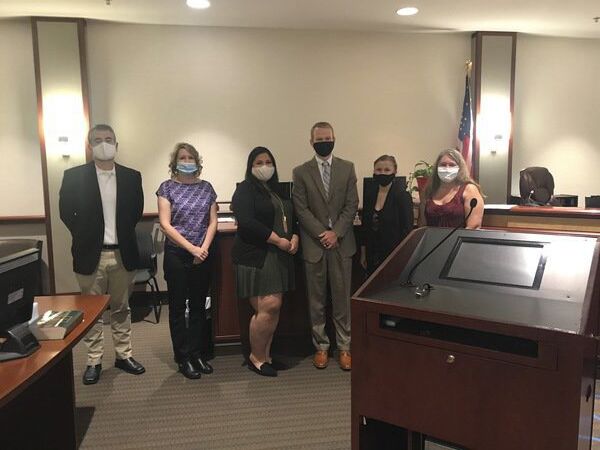 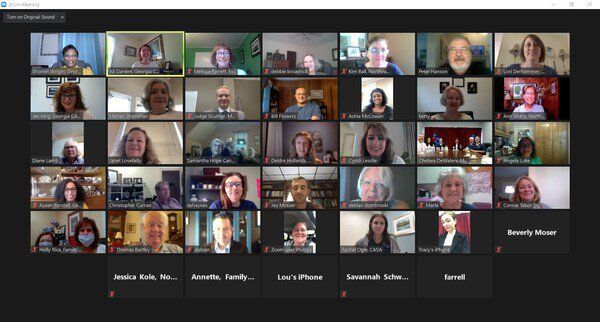 The Family Support Council's Court Appointed Special Advocate (CASA) program for Whitfield and Murray counties has been honored with the 2020 Innovative Program Award of Excellence from Georgia CASA, and the group celebrated the achievement during a Zoom conference last month.

The Family Support Council's Court Appointed Special Advocate (CASA) program for Whitfield and Murray counties has been honored with the 2020 Innovative Program Award of Excellence from Georgia CASA, and the group celebrated the achievement during a Zoom conference last month.

The Family Support Council's Court Appointed Special Advocate (CASA) program for Whitfield and Murray counties has been honored with the 2020 Innovative Program Award of Excellence from Georgia CASA.

The Innovative Program Award of Excellence is fitting because of Murray/Whitfield CASA's innovative practices, as the program has expanded grant funding, increased volunteers, boosted community education and deepened relationships with local civic clubs and organizations, Jen King, Georgia CASA executive director, explained last month as she presented the award via a Zoom conference. They've "focused all along on quality and consistent advocacy" for children, and "I can't wait to see what they have planned next."

"For us, it was a really encouraging boost to have during a time when it's so hard for us all to be together face to face and we're struggling to feel connected" due to the new coronavirus (COVID-19) pandemic, said Chelsea DeWaters, program manager for Murray/Whitfield CASA. "It's also an acknowledgement of how far we've come as a team, what we've accomplished and a reminder of the ways what we do really matters."

Deborah Haynes-Smith, Murray County Division of Family and Children Services director, has worked closely with Murray/Whitfield CASA for most of her 15-year career, and she appreciates the way CASA and the Division of Family and Children Services are "able to come together to make the best decisions for children and families," she said. Murray/Whitfield CASA is "definitely the best CASA program in the state."

When Jonathan Sloan became director of the Whitfield County Division of Family and Children Services, he was immediately impressed by the Murray/Whitfield CASA program, he said.

"They are really out in the community, and they do amazing work," Sloan said.

"We're really honored and grateful" for the recognition, but reaching this point has truly been a team effort with "all of our partners and collaborators," from judges, to Division of Family and Children Services directors and staff, to the Family Support Council, DeWaters said. The Family Support Council, for example, has "created a safe house for us in the CASA program to do our work, and we feed off of" that encouragement.

The CASA program has grown and flourished with the help of the larger community, as children in foster care and their families are now being viewed as truly "part of our community," she said. "It's easy for some to think of them as, like, wards of the state, and for them to become sort of invisible, but these are our children."

Since beginning a concerted effort to diversify its funding base four years ago, the CASA program’s budget and capacity have expanded, allowing for additional staff training and marketing, she said. By adding capacity, CASA staff members are able to work more closely with volunteers, including "walking them through their first case."

The juvenile justice system is "very complex," and ''there's a tremendous amount of information they have to learn, (so) these volunteers trust us to guide them until they get the hang of it," she said. CASA volunteers deserve that attention and assistance, because they're "applying themselves to what other people need, (and) it's very courageous for a member of the community to take on this role."

Over the past several years, Murray/Whitfield CASA has also developed and refined a litany of policies and protocols that have "led to more consistency in the services we provide to children," she said. "It's not glamorous," but those changes have led to "deeper involvement in cases" as CASA volunteers "can really focus on their kids and not get sidetracked."

The CASA program has boosted its awareness in both counties and picked up recruitment of volunteers, DeWaters said. Pre-service training for CASA volunteers has been strengthened, and three trainings are now offered each year.

"Once volunteers are trained, they are fully committed to serve children and recognized for their efforts through a commemorative swearing-in ceremony and reception," she said. "The number of new volunteers from previous years has nearly doubled, with the largest number of volunteers ever being reached in 2018."

The next available training for people interested in being CASA volunteers starts volunteering begins on Monday, which is also the kickoff date for Child Welfare Worker Appreciation Week. For more information on becoming a CASA volunteer, email Harmon at tharmon@fscdalton.com or call (706) 428-7931.

DeWaters would love to see the CASA program reach 60 volunteers, because then "we can see the large majority of" the roughly 250 children in foster care in Whitfield and Murray Counties, she said. Currently, the program has approximately 35 volunteers.

Souther, Juvenile Court judge for the Conasauga Judicial Circuit that includes Whitfield and Murray counties, congratulated the program on the "much-deserved award."

"Our work with children depends on our partners in the community, and our local CASA provides an invaluable service to our community, our juvenile courts, and our children," Souther added. "Our Murray/Whitfield CASA program deserves recognition for the exceptional job they do, information they provide to the Court, and advocacy they provide for our children.”

Souther "can always count on CASA" not only to have a physical presence in the courtroom for his cases, but to present thorough reports and be available for conversations, he said. That information "helps me get back to the most important part of the case — the children — whenever I get lost in the laws and procedures."

Murray/Whitfield CASA has "never let me down, and I don't expect they ever will," he said. "I don't think it's in them (to let me down)."

Diane Green, who spent nearly a decade with the CASA program before retiring earlier this year, accepted the award on behalf of Murray/Whitfield CASA during the Zoom ceremony, and she noted "we're a true family.''

"This is an awesome honor," and Murray/Whitfield CASA remains laser focused on its core mission of serving as many children as possible, she said. "I can't wait to see what's next."

The Innovative Program Award of Excellence "is a milestone for our whole child welfare community here," DeWaters concluded. "It's an encouraging testament to how our child welfare team has prioritized advocacy for our children."