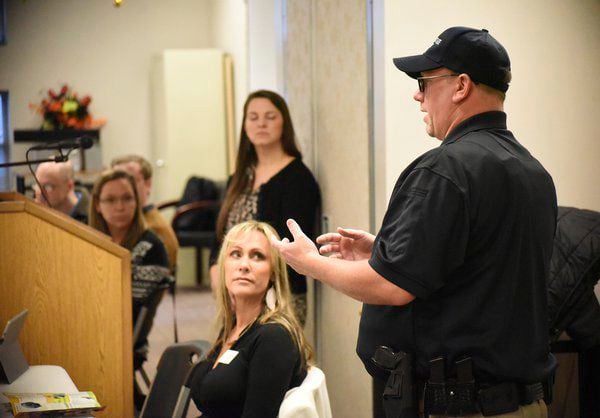 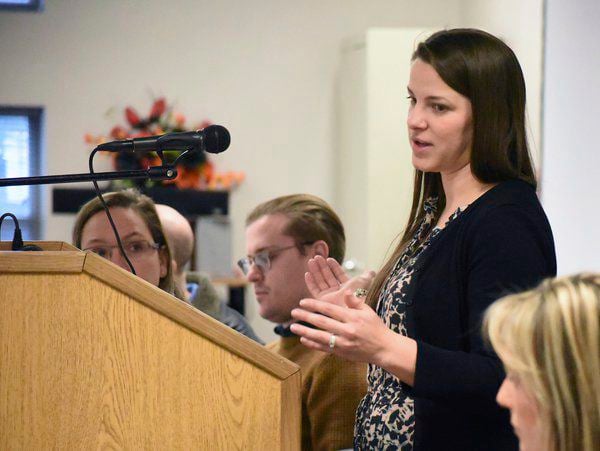 During Saturday's panel discussion at the Mack Gaston Community Center, Jenny Guy, associate director of counseling at Dalton State College, promulgated that underage drinking "is not inevitable, and parents are not helpless" to combat the problem.

During Saturday's panel discussion at the Mack Gaston Community Center, Jenny Guy, associate director of counseling at Dalton State College, promulgated that underage drinking "is not inevitable, and parents are not helpless" to combat the problem.

A panel of experts discussed the problem of underage drinking, as well as possible solutions, Saturday during an event sponsored by Dalton State College's Counseling Center.

In 2017, more than half of full-time college students reported using alcohol, with more than a third reporting engaging in binge drinking (consuming five or more drinks in a sitting), according to the Substance Abuse and Mental Health Services Administration (SAMHSA). And alcohol use increases as college students near the legal drinking age of 21, with 37 percent of 18-year-olds reporting alcohol use within 30 days of being surveyed, and 50% of 20-year-olds doing likewise.

"We know this is an important topic," and it's "the collective responsibility of our nation as a whole" to prevent underage drinking, said Jenny Guy, associate director of counseling at Dalton State College. Underage drinking "is not inevitable and parents are not helpless" to combat the problem.

Alcohol is the most widely-abused substance among youth, but the vast preponderance of youth who abstain from drinking indicated they did so because of beliefs inculcated into them by their parents, so "we can cultivate a culture" where underage drinking isn't accepted by speaking about the issue, educating people about the dangers and solutions, changing societal norms, intervening early and reducing access, Guy said. "Get help, seek guidance and talk to professionals."

Dalton State "loves to collaborate" with community partners and offer education, Guy said during Saturday's symposium at the Mack Gaston Community Center, which was part of the Communities Talk program by SAMHSA. The goal is to "start a conversation on helping youth in the community."

Early intervention is paramount when contending with the societal scourge of underage drinking, said Chattanooga's Focus Treatment Center's Amy Speek. "This is a disease and we need to change the stigma to get the conversation going."

It's critical to "come up with a game plan with kids so they can socially navigate saying, 'No,'" to alcohol, said Nick Deslattes, a counselor at Dalton State. And, if they are going to drink, they need to know how to do so as safely as possible to prevent tragic consequences.

It behooves parents to understand the manner in which underage drinking is different now than when they were young, said Speek, a mother of four teenagers. For example, while beer cans may have been telltale signs decades ago, youth now will often pour clear vodka into water bottles, and "no one is the wiser."

Dangerously, high school and college students are often unaware how much alcohol they're really consuming, Deslattes said. Craft beers, for example, boast higher alcohol content than traditional beers, and "it's also hard to measure when you're mixing liquor with other beverages."

Roughly 600,000 college students ages 18-24 are unintentionally injured each year under the influence of alcohol, nearly 700,000 are assaulted by another student who has been drinking, and nearly 1,000 die in alcohol-related traffic crashes, according to the The National Center for Biotechnology Information, part of the United States National Library of Medicine, a branch of the National Institutes of Health. An estimated 2 million students drive under the influence of alcohol each year.

Individuals are four-times more likely to binge-drink after the age of 21 if they began drinking prior to age 15, and binge drinking is "absolutely a problem," said Amy Perkins, a licensed psychologist. Among other consequences, it can "cause issues with brain development."

Quite simply, "the sooner they start (drinking), the worse the problems," said Speek. Binge-drinkers are actually "tougher to treat" as adults than those who drink daily, because the latter group faces more consequences, and "it's clear" to everyone they have a problem, while the those in the former category can delude themselves into believing drinking to excess a few times a month isn't problematic.

"Addiction is very clever," she said. Even binge-drinking a couple of times per month "is going to have a significant impact" on health.

Individuals, especially youth, "don't want to put that title (of) 'alcoholic' on" themselves, said Dalton State College Public Safety's Jason Baynes. "They put (excessive drinking) in the back of their mind," instead of at the forefront.

A culture of binge drinking is prevalent on college campuses, and there's a sense among some that "you can just do it in college, then stop, and it'll be fine," Perkins said. "That's often not the case, and then people are surprised later by their own drinking habits."

There's also a genetic predisposition in some toward alcohol abuse, Speek said. "If you don't know about that," embarking down a drinking path can be all the more treacherous.

And alcoholism "is cyclical" Perkins said. Children are much more likely to become problem drinkers if they see their parents binge drink.

There are a lot of resources to help attenuate underage drinking and alcoholism. Georgia HOPE, for example, is a community-based provider of mental health, substance use and family preservation services, Chattanooga's Focus Treatment Center is private, confidential, and only about 30 minutes from Dalton, and the Catoosa Prevention Initiative manages and implements two grants --ASAPP (Alcohol and Substance Abuse Prevention Project) and GENRx, which addresses prescription drugs -- each with different campaigns and strategies to help educate the community of the dangers of substance abuse.

In addition, SAMHSA offers an app parents can download that helps them navigate conversations with their children about drinking, and it provides basic facts to share, Deslattes. "You practice it, you learn it and it's something you can use."