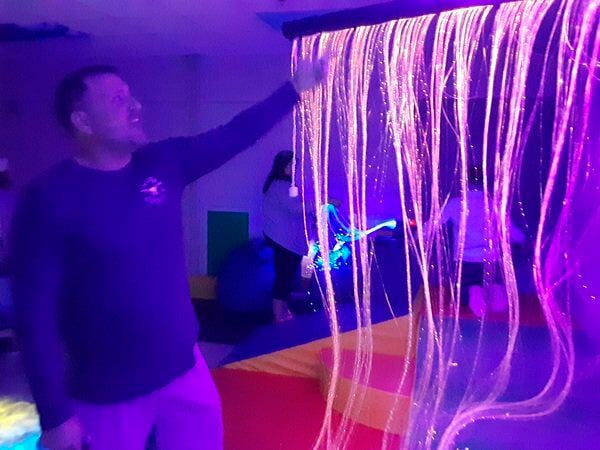 Andy's Playroom is "not just a sensory room, but a multipurpose, multifaceted therapy room," said Stephen Hardin, who designed the room and volunteers regularly in it. "We learned through our (special needs) child, (Andy), to find what your child likes and then adapt it." 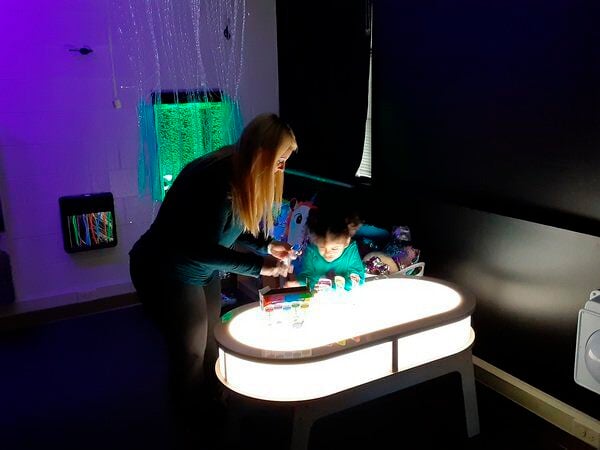 Cortney Phillips, special education teacher at Antioch Elementary School, works at a special light table with student Diana Gonzalez. Andy's Playroom is "so much more than I could have ever imagined," Phillips said. 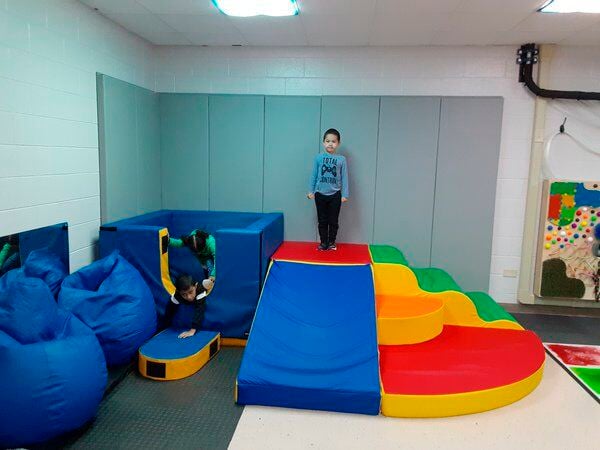 Antioch Elementary School students utilize some of the offerings in Andy's Playroom. The room, which serves primarily children with special needs, will be dedicated at 10 a.m. on Saturday.

Andy's Playroom is "not just a sensory room, but a multipurpose, multifaceted therapy room," said Stephen Hardin, who designed the room and volunteers regularly in it. "We learned through our (special needs) child, (Andy), to find what your child likes and then adapt it."

Cortney Phillips, special education teacher at Antioch Elementary School, works at a special light table with student Diana Gonzalez. Andy's Playroom is "so much more than I could have ever imagined," Phillips said.

Antioch Elementary School students utilize some of the offerings in Andy's Playroom. The room, which serves primarily children with special needs, will be dedicated at 10 a.m. on Saturday.

After their son's death last year, Alice and Stephen Hardin channeled their grief into a new room that will benefit countless children for years, and Andy's Playroom will be dedicated Saturday at 10 a.m.

"I know his legacy will live on (through this room)," said Alice, an English to Speakers of Other Languages teacher at Antioch Elementary School, where the room is located. "He had a legacy, and his life had a purpose."

"It's not just a sensory room, but a multipurpose, multifaceted therapy room," said Stephen, who designed the room and volunteers regularly in it. "We've taken the best we've seen" through various experiences with Andy — from the Anna Shaw Children's Institute, the North Georgia Health District's early-intervention program Babies Can't Wait and Atlanta's Center for the Visually Impaired to Georgia Pines support services for those with developmental disabilities and Lekotek of Georgia — and incorporated those elements into the room at Antioch.

For example, at Lekotek — a nonprofit with a mission to facilitate the inclusion of children with disabilities into their families, schools and communities by providing accessible play, adapted toys, technology, information and resources — "we learned how to adapt toys" for children with special needs to enjoy, as "we didn't understand the need for all this until we had Andy," Stephen said. "We were blessed, and we've brought all that (knowledge) we've gained to" this room, because not to share it would "have been a lost opportunity."

Alice "would never have thought about a lot of this if we didn't have a child with special needs, (and) we hope this raises the awareness of the need for" these items, she said. As Alice and her husband took Andy to various therapies, "we thought why is this stuff not in schools. That's where the kids are, and it kind of broke my heart (that most) parents don't have access" to such items for their special-needs children.

So, they began to plan the room while Andy was still alive, but his death last year turned the room into their mission, kicking them "into high gear," she said. "This became much more ambitious than we'd planned (originally), but it was, like, we had to get it done."

Stephen channeled his grief into the project, spending six months creating a one-twelfth scale model of the room to show to school staff and potential donors. He also had the plans approved by staff of the Anna Shaw Children's Institute and the Children's Hospital of Atlanta.

"To be honest, I obsessed over this, and part of it was my grieving," he said. "I thought Andy was my calling, (so) when he passed, I (felt) this was what I was here to do."

Alice has "heard the quote 'Grief is just love with nowhere else to go,' and we had all this love for our child who wasn't here anymore," she said. "When he passed, we thought, 'Let's take our grief and sadness (...) and help others.'"

Andy was born with a chromosome disorder, spina bifida, a cleft palate, visual impairment and deafness, among other medical difficulties, and he died at age 3 in February 2020.

The playroom moniker is actually a slight misnomer, as "it's not a 'playroom,'" Alice said. The toys are "motivational tools, and everything in here has a purpose."

"We learned through our child to find what your child likes and then adapt it for" him or her, Stephen said. "That's how these kids exercise" physically and mentally, "through their toys."

"All of our therapists use the room to work with our students and to meet their occupational and physical therapy needs," said Cortney Phillips, a special education teacher at Antioch. "The room is so much more than I could have ever imagined, (and) we are so thankful to be able to meet our students' needs through this amazing setting."

Rooms like the one at Antioch are particularly beneficial for children with autism, said Ruthie Rule, Special Education director for Whitfield County Schools. "Seeing them go into those rooms, it's a brain shift."

"It calms them and allows them to regulate their emotions," Rule added. "I've seen the benefits firsthand."

Children with special needs are "not helpless, (but, rather), trapped," Stephen said. "Andy was trapped."

The room includes multiple swings for different uses; a light table; tables that can be written on and broken down to allow for more space in the room; chairs that wobble and sway; chairs that can allow children to sit higher or lower to the ground based on size and also flip to become tables; calming lights, sounds and images; various floors to establish boundaries for children in different sections of the room; a pit that will eventually be filled with balls (following the conclusion of the COVID-19 pandemic); numerous musical toys and a therapeutic bench, among other features.

Items have been placed at the level of children in the room so they can utilize them, and they're low enough that children in wheelchairs can also access them.

Family and friends donated to the room, as did companies, such as Engineered Floors, and community organizations, like the Carpet City Rotary Club.

"There's probably about $35,000 worth of stuff" in here, roughly $20,000 of which came from donations, said Alice, who led professional development in the room where she demonstrated all of the equipment for educators at Antioch. Grants, including from the Whitfield County Education Foundation, also helped.

While the room is primarily for use by children with special needs, it can serve others, as well, and "that's why this room is so cool, because it has so many great resources for kids," she said. "Children with test anxiety who just need a few moments," for example, can "come into this calming space."

Students can work in individual stations in the room or in small groups, and "it's a tremendous blessing," said Tracie Dempsey, Antioch's principal. "It's unique, and we can do a whole classroom in here with a very distinct purpose."

"The capabilities are really endless, and we're very grateful for everything," Dempsey added. "As a school, we could not have done something like this on our own."

The toys and equipment "are very expensive — one toy in here might be half the Special Education budget — and most people can't (afford) them," Stephen said. "We want to give back and pay it forward, because we've been blessed."

And the room still has "plenty of room to improve, (as) we'll evolve as we see what the needs of the kids are," Stephen added. "All children have different needs, and we have to meet all their needs."