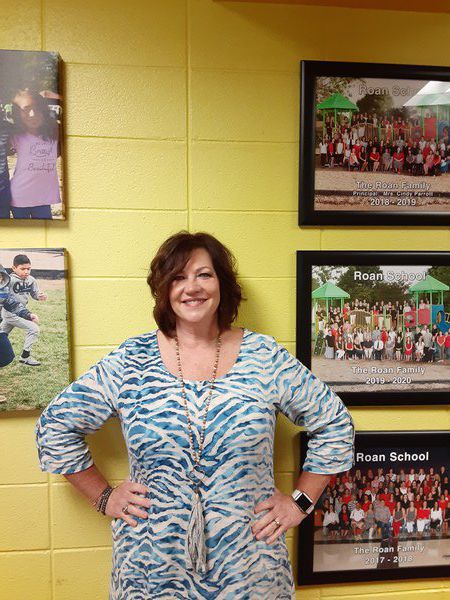 "Not many administrators get to have their entire career in one place, and it's been a blessing for me to carry on the Roan School legacy," said Cindy Parrott, who has been at Roan for nearly three decades. "This is home." 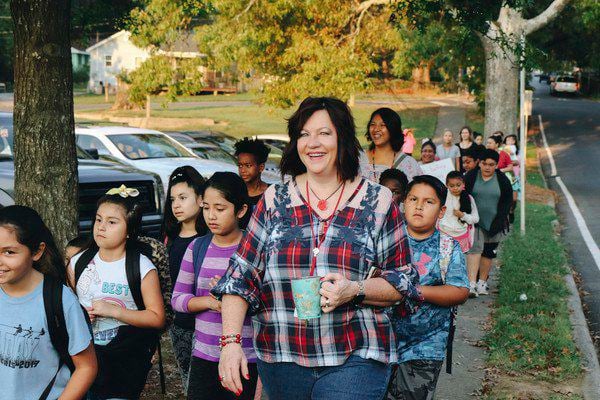 "I want to thank everyone for the love and support they've showed me and shown each other, and I want them to know they all matter," said Cindy Parrott, who is retiring after spending nearly three decades at Roan School, the last 11 as principal. "Don't ever forget you can be anything you want to be."

"Not many administrators get to have their entire career in one place, and it's been a blessing for me to carry on the Roan School legacy," said Cindy Parrott, who has been at Roan for nearly three decades. "This is home."

"I want to thank everyone for the love and support they've showed me and shown each other, and I want them to know they all matter," said Cindy Parrott, who is retiring after spending nearly three decades at Roan School, the last 11 as principal. "Don't ever forget you can be anything you want to be."

Roan School Principal Cindy Parrott has spent her entire education career in the same school, part of the reason her retirement at the end of this month is so "bittersweet."

"It was a very hard decision, and it took me a couple of months to decide 100%," said Parrott, who has been principal of the elementary school for 11 years following four years as assistant principal. "I am here more than I am home, and (the people here) are my family."

"Not many administrators get to have their entire career in one place, and it's been a blessing for me to carry on the Roan School legacy," she added. "This is home."

It can't be overstated how unique and special it is to spend one's entire career at the same school, said Tim Scott, superintendent of Dalton Public Schools. Parrott is a "selfless servant" and a "great educator."

Parrott's mother has battled Alzheimer's disease for the last four years, and she wants to spend more time with her. Parrott and her mother attended a concert in November 2019 of her mother's favorite artist, country music singer Blake Shelton, and that experience crystalized the desire to share more moments together.

"We just had the best time, and I'll remember" all those experiences with her, she said. "I don't want to have any regrets."

Parrott's husband of three decades, Bruce, retired this fall, so her retirement will also afford them more time together, she said. "We can travel," etc., but "I still want to be involved at Roan."

"The students, families, and staff will always hold a special place in my heart," and Parrott is thankful "for the immense privilege it has been to serve as principal," she said. "We always say, 'Once a Bobcat always a Bobcat,'" and "'The Roan Way' (is) hard to tell people exactly what it is — you have to experience it."

"It's the love and family we've created here," she said. When Roan hosts family nights, for example, "we exceed 600 people."

Parrott, who also did her student teaching at Roan, began as a classroom educator in pre-kindergarten, kindergarten and first grade. She then moved up to assistant principal before succeeding Laura Orr, now Dalton Public Schools chief academic officer, as principal.

"My first year of pre-kindergarten, we were required by the state to do three home visits," and Parrott continues to encourage her staff members to visit families at home, she said. "I'm still a big believer in home visits, (because) you get to know families better and build long-lasting relationships."

The biggest change Parrott has observed during her nearly three decades at Roan is increased use of technology.

"I can remember when we had our first inter-office email system," she said with a chuckle. "It was just a means of communication, but we thought it was the best thing ever."

Due to the new coronavirus (COVID-19) pandemic, Dalton Public Schools began distance learning in mid-March and finished this academic year in that fashion, so Parrott has been denied the farewell she and others would have preferred. She feels worse for her students who missed "all the fun, end-of-the-year celebrations," from a talent show to awards day, she said.

"I keep my calendar on my phone, and those (reminders) kept popping up," she said.

Because the pandemic has decimated the economy, schools will need to cut budgets, as they receive less funding from the state, and Parrott understands those challenges, since her first year as principal, 2009, coincided with the Great Recession.

"It wasn't easy, but you make it work," she said. "I still think the biggest issue is the number of kids in poverty."

Poverty already makes life challenging for families, and with unemployment exploding due to the economic crisis, more students will struggle. Parrott, who was nominated for the Tom Jones Award — Dalton Public School's highest honor for staff members — in 2009, has been this system's representative on the north Georgia Regional Educational Service Agency (RESA) principal advisory board the past five years, and her colleagues agree that poverty is the top problem for students.

Those discussions led to the establishment of the Roan Resource Center, which includes partners like Rock Bridge Community Church, to offer "wraparound services to students and parents," she said. "It's growing, and it'll be more important now than ever."

"The poverty worries me, and I pray for our families all the time," she said. "This is going to be hard for them."

Parrott "values relationships with all stakeholders, (and) throughout her career, establishing relationships has been her primary focus," said Charlie Tripp, Roan's longtime assistant principal. "She was committed to keeping parents involved through parent conferences, home visits and Roan Family Nights."

However, "her greatest community collaboration has been the establishment of a partnership between Rock Bridge Community Church and Roan," said Tripp, who will succeed her friend and co-worker as Roan's principal. Their "support has been invaluable to our staff, students and families."

Parrott has earned the admiration of colleagues, because she leads the school with a positive attitude that is “contagious”; she establishes rewarding relationships with students, staff and parents; she cares for everyone; and she treats all “as if they are her very own family,” cafeteria worker Ron Bailey explained this fall. “She is compassionate, considerate, upbeat, supportive, and has the biggest heart ever.”

Parrott couldn't be more "thrilled" that Tripp, her "dear friend," is taking the baton from her as principal, she said. "I was jumping up and down, (because) she will carry on our Roan traditions (while) bringing new things to the school."

Parrott and Tripp taught pre-kindergarten together, and then Parrott served as the host classroom when Tripp was a literacy coach before they moved into their principal and assistant principal roles.

"We've been together this whole time, and we just have a great relationship," Parrott said. "We make decisions together, she's really already a principal."

"I know the school is in great hands, so I won't lose any sleep over that," she added. "I'm so relieved about that."

Looking back and ahead

Parrott does wish she could have manifested one of her unrealized ideas: allowing fifth-graders to spend a day shadowing professionals in their desired career path.

"That's the only thing I wanted to do we could never pull off," she said. "We never could get the time (for what) would've been a big initiative."

While fifth-graders do visit Lee University in Cleveland, Tennessee, annually to see a college campus and get a sense of collegiate life, Parrott wishes she could have added the professional piece, because "I want them to see anything is possible for them," she said. "I don't want them to think there is anything they cannot do."

Parrott slowly moved out of her office this spring, but she left the preponderance of those duties until her last day, and "I'm sure I'll be crying when I drive out" of the parking lot for the last time, she said through tears. "I'm not a big crier, but it's a life-changing transition, and that's the hardest part: finally saying goodbye."

"I want to thank everyone for the love and support they've showed me and shown each other, and I want them to know they all matter," she said. "Don't ever forget you can be anything you want to be."