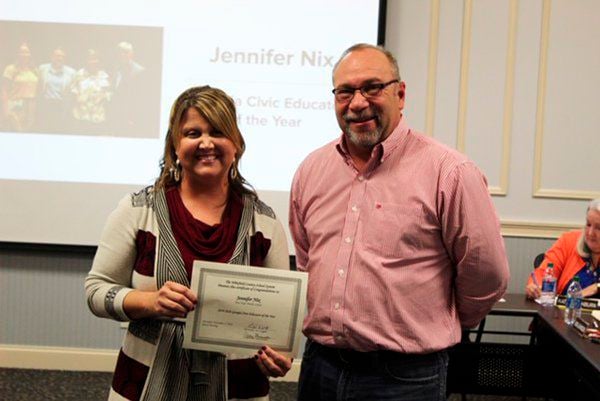 During a Whitfield Board of Education meeting in November, New Hope Middle School teacher Jennifer Nix (shown here with Bill Worley, vice chairman of the school board) was celebrated for being named the Georgia Civic Engagement Teacher of the Year at this fall's Georgia Council for the Social Studies Conference. 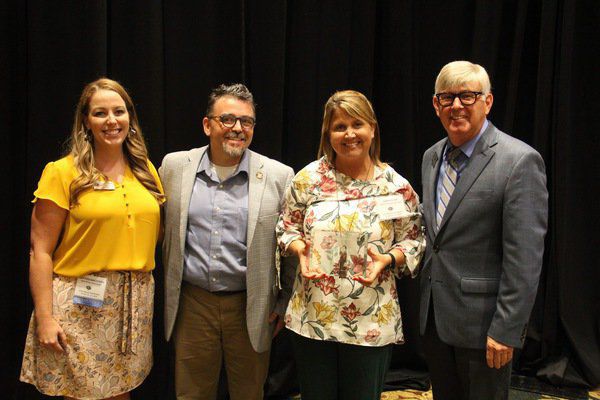 During a Whitfield Board of Education meeting in November, New Hope Middle School teacher Jennifer Nix (shown here with Bill Worley, vice chairman of the school board) was celebrated for being named the Georgia Civic Engagement Teacher of the Year at this fall's Georgia Council for the Social Studies Conference.

Jennifer Nix, a teacher at New Hope Middle School, was named Georgia Civic Engagement Teacher of the Year at this fall's Georgia Council for the Social Studies Conference, an achievement made all the more special by the fact she received the award at her alma mater, the University of Georgia.

"It's a huge honor," Nix said. "It's very nice at this point in my career to be encouraged that I'm on the right track and doing the right things to propel students forward."

Those "right things" are engaging her students so they understand civics and history, she said. "I make it active, and I try to keep it storytelling to make them think continuously about what people were going through at those moments in time."

"I love simulations, I love having them read primary source documents, and we do a lot of programs outside of school," the most beneficial of which may be Junior Youth Assembly, which is offered through the state YMCA, she said. Students are given roles to play in Georgia government, and "it's super powerful to take a part in it instead of just reading about government from a textbook."

Nix, who is helping write civics education curriculum for the state through the Georgia Center for Civic Engagement, teaches history, civics and language arts at New Hope, and "there's so much history here where we live," she said. For students, "it's in their communities and their own backyards."

While Nix is confident in her techniques, she didn't give herself much chance of winning this award, she said. "I didn't even have a speech prepared."

For Randell Trammell, chief executive officer for the Georgia Center for Civic Engagement, "it was particularly meaningful" to present this award to Nix, since he's a native of Dalton and a graduate of Southeast Whitfield High School, he said. "We have wonderful educators in (Whitfield County), and their investment lives on through many of us, including myself and Jennifer as we pay it forward to the next generation."

A highlight of the conference in Athens in October for Nix was listening to a speech by the great-great-granddaughter of Frederick Douglass, Nettie Washington Douglass, who — along with her family — is fighting "modern slavery," human trafficking, Nix said. "She was incredible and inspiring." Frederick Douglass was a human rights leader and social activist of the 19th century.

Nix began her UGA studies as a journalism major, but, through time at summer camps, she realized she loved working with children and changed to education, she said. And social studies have always been a priority for Nix.

"I feel so strongly that social studies is life," she said. "Helping kids to understand the world around them is so powerful."

Her husband, Andrew, is also a Whitfield County native, and he's the course superintendent at The Farm Golf Club. They have two children, Preston, 10, and Blakely, 7, who both attend New Hope Elementary essentially next door to the middle school, so "instead of spending so much time in metro Atlanta traffic, we're all together now."

In Cobb County, Nix was a social studies coordinator, gifted coordinator and teacher of the year at her school, as well as a member of the leadership team, STEM (science, technology, engineering and mathematics) committee and the Committee of 100 (a Cobb County steering committee), so she was "skeptical" about returning to Whitfield County, she said. "I never expected to love (Whitfield County Schools and New Hope Middle School) so much."

While some schools in America have de-emphasized the humanities in favor of math and science, Nix feels blessed to teach in a system concerned with "the whole child," she said. "Kids thrive in this atmosphere."

In addition, she's not "micromanaged," but, instead, administrators "trust my judgment," she said. Nix often brings in guest speakers, from state representatives to Charlie Bethel (who served as a senator in the Georgia General Assembly from Dalton prior to his appointment to the Supreme Court of Georgia), and those individuals demonstrate to students that careers in the upper echelon of politics "are not out of reach."

Nix "models in her classroom what we would love for every civics/government teacher to do," namely putting students in positions where "they can try on, embody and understand what is being discussed rather than just hearing about it or taking notes," Trammell said. "There's an old saying: 'If I see or hear, I may forget; but if I do, I will never forget.'"

Nix's story is a valuable asset in appealing to her students, too.

"I remember thinking I had to go to a big city to do something meaningful, but you can have so much influence in a small town," she said. "I had to learn that by myself, but now I can teach kids that their voices matter."

Nix enjoys all units, but her favorite topics are Georgia history and World War II, the former because of its local relevance, and the latter because it incorporates everything students have learned in history leading to that point.

"History is not standalone," she said. "Everything is connected."

Nix is disappointed by the hyperpartisanship of modern politics, because not only is it not what the Founding Fathers intended for American government, it also sets a poor example for youth, she said.

"We teach all day about working together and finding common ground," she said. "If students understand that, they can be our hope for a less-polarized future."

Nix is convinced that an emphasis on civics with today's youth will pay major dividends down the line, she said.

"What's more important than civics, (where you) learn how to be an active participant in your world?"