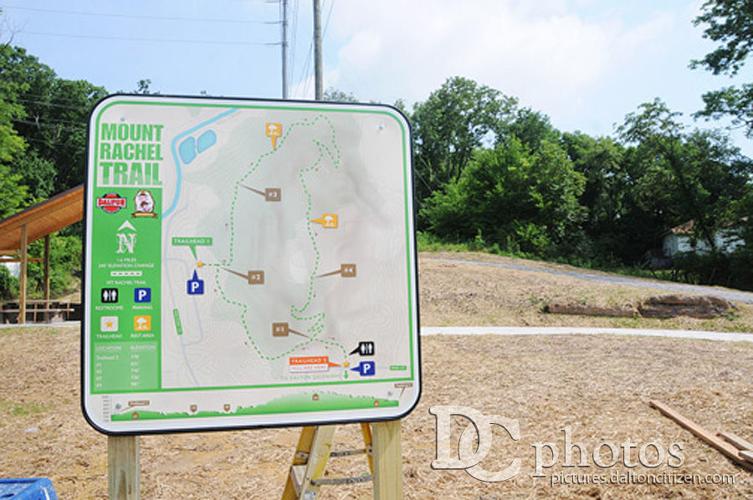 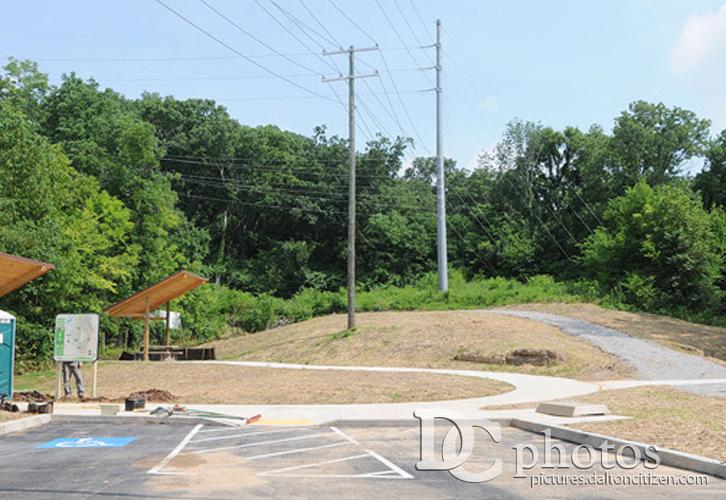 Area residents and others will soon be able to bike or walk up to the top of Mount Rachel to enjoy the view or just get a little exercise. All they need is for Mother Nature to cooperate and let workers finish a 1.8-mile trail that will loop around the mountain.

“We are very close. We did a quasi final walk through last week and came up with a final punch list of items that need to be completed by the contractor. But with all of the rain we’ve had they haven’t had an opportunity to get to them,” said Dalton Parks and Recreation Director Steve Card. “We still hope to have a grand opening in the first week of August.”

The trail starts and ends on Park Street, just in front of Rachel Street, where the city has built a “trailhead” with several parking places and restrooms. A second, smaller trailhead sits on Chenille Street.

“We’ve got some very minor work that needs to be done on the trail itself. And we still need to hook up water at the water fountains and take care of some lighting and a few other issues at the trailheads,” Card said.

The project costs about $350,000 and has been funded completely through grants from the Georgia Department of Natural Resources and the federal community development block grant program.

It has been more than two years since the project started. Card said most of that time was spent making sure the project complied with all state and federal regulations.

The trail is part of a larger plan to revitalize the Crown Mill area, which began three years ago when the City Council used part of its community development block grant money to shore up the Hamilton House, the city’s oldest brick home, which had a dangerously bulging wall.

The Park Street trailhead faces a planned pocket park on Rachel Street, which is itself part of a larger planned greenway — a biking and walking path — that will link Selvidge Street and Chattanooga Avenue.

Officials say the greenway will have benches and trash cans along its route and will be well lighted.

Trail runners and mountain bikers will soon have a place to play right in the heart of Dalton.

Dalton residents could be hiking and biking new trails on Mount Rachel next spring.