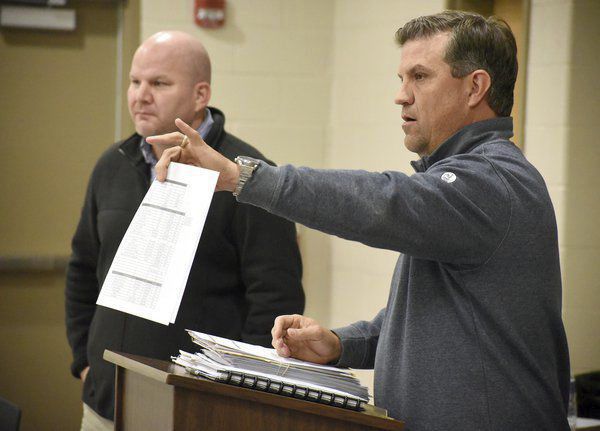 Chris Shiflett, chairman of the SPLOST citizens advisory committee, makes a point as Whitfield County Administrator Mark Gibson looks on at the Edwards Park Community Center in this file photo. 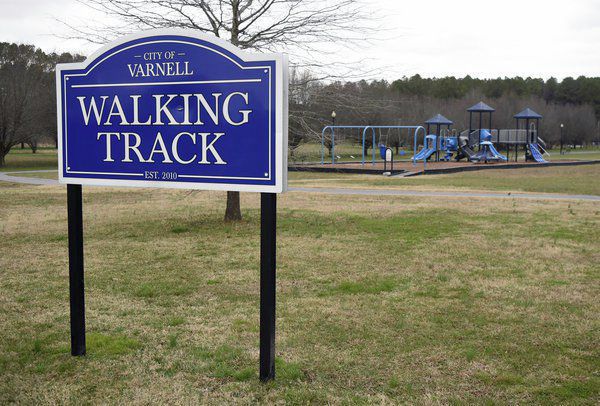 The city of Varnell's SPLOST project list includes $267,000 for capital improvements for the city's parks and recreation offerings.

Chris Shiflett, chairman of the SPLOST citizens advisory committee, makes a point as Whitfield County Administrator Mark Gibson looks on at the Edwards Park Community Center in this file photo.

The city of Varnell's SPLOST project list includes $267,000 for capital improvements for the city's parks and recreation offerings.

For almost five months in 2019, 16 residents from across Whitfield County hammered out the details of projects they believed should be funded by a future Special Purpose Local Option Sales Tax (SPLOST).

"We started in August and ran through the first couple of weeks of December," said Chris Shiflett, who chaired the citizens advisory committee. Committee members were appointed by members of the county Board of Commissioners as well as the city councils of Dalton, Cohutta, Tunnel Hill and Varnell.

Their efforts shaped the four-year, $66 million SPLOST proposal that is on the June 9 ballot. Advance voting on the SPLOST as well as races on the general primaries ballot is underway at the elections office at the courthouse and continues through June 5.

"I believe that the SPLOST is virtually unchanged from our proposal," said Shiflett.

A SPLOST is a 1% tax on most goods sold in a county. The money it generates can be used for capital projects and some other items but not operating expenses.

The SPLOST if approved would provide $6 million for repairs to the county courthouse, including a new roof, and $850,000 in security upgrades for the county jail, including a new electronic control system for doors. Those projects are considered Tier 1 projects that are funded before local governments split the rest of the money.

"We felt that was work that needed to be done," said Shiflett. "In the courthouse, they've had problems with the roof leaking, moisture and potential mold issues, potential air quality. A lot of people don't realize that even though the outside of the courthouse all looks the same and relatively new thanks to that renovation and expansion 19 or 20 years ago, that south end of the courthouse, on the inside, dates back to the 1960s and is relatively unchanged. And all the electronics and security equipment in the jail dates back to when it was built some 20 years ago."

Much of the work on the courthouse and the jail has already been completed, paid for from the county's general fund. The plan is to reimburse the general fund from the SPLOST for that work if the SPLOST passes.

After the Tier 1 projects are paid for, the rest of the money would be split by the county and the cities based on population.

Whitfield County would receive $38.1 million, which would provide:

• Approximately $13 million for the recreation department to construct a new Riverbend Park near Southeast Whitfield High School and $2.3 million for improvements to fields at Westside Park and the Miracle Field. Riverbend Park would include four turf multipurpose fields, a community center with two gyms, and two turf football/soccer fields.

• $9.4 million for Public Works for paving, structures and equipment replacement.

• $4.9 million for sewer expansion to the Carbondale interchange, the Connector 3 interchange and north along Cleveland Highway to about Frontier Trail to encourage economic development in those areas.

• Almost $4.7 million for the fire department to retire bond debt on Station 12 in the south end of the county, upgrade six of the county’s 12 oldest fire stations, replace two fire engines and provide alternative response vehicles to three of the busiest stations.

• $1.5 million for the sheriff’s office for vehicle replacements.

• $1.2 million for the Dalton-Whitfield County Public Library, which would unlock another $2 million in funding from the state. The library would use that money to, among other things, add 1,500 square feet and renovate another 1,500 square feet of the 33,648-square-foot building.

• $700,000 for interest on possible bonds to jumpstart projects.

• $300,000 for brush removal and development of trails at Rocky Face Ridge Park.

• $200,000 for expansion and improvements at the county animal shelter.

The city of Dalton would receive some $19 million, which would provide:

• Some $11.2 million for a new John Davis Recreation Center and for soccer fields and other work at Heritage Point Park. The City Council plans to build the new recreation center through its general fund and reimburse the general fund from the SPLOST if it passes. The current building was built in three stages. The original section was built in 1957. In 1963, the building was expanded with a gym and additional office space. In 1986, the city added more office space and programming areas.

• $2.6 million for a new ladder truck and two new pumper trucks for the fire department.

• $2.5 million for roads, bridges and streets, and stormwater projects, as well as vehicles for the Public Works Department.

• $2.4 million for a new building for storing and processing evidence for the Dalton Police Department and various equipment for the police and fire departments.

• $425,000 to renovate the kitchen and dining areas of the Dalton-Whitfield Senior Center.

Varnell would receive $1.055 million if the SPLOST passes. The largest item on its project list is $267,000 for capital improvements in its parks and recreation department, which would include playground equipment, a dog park and a covered picnic area.

Tunnel Hill would receive $490,945 if the SPLOST is approved. The largest item on its projects list is $300,000 for the city’s historic train depot. Officials hope to turn it into a community center. They have already put $600,000 from the city's share of the 2015 SPLOST into the project as well as $300,000 from a grant from the Appalachian Regional Commission.

Cohutta would receive $378,560 if voters approve the SPLOST. The biggest item on its list is $150,000 for renovations to town buildings.

“We are going to do some things at Town Hall. It has some roof issues. We want to put a generator in there, so we know we’ll have power in emergencies,” Mayor Ron Shinnick said earlier this year. “We’ll also be doing some work on our community center. It’s used for birthday parties, weddings, family reunions. It’s used probably a couple of hundred times a year. It needs some painting on the inside, some sheetrock work. We need to work on the kitchen, some new appliances.”

“Not right away, but probably in two or three years, we’ll be buying a couple of new police cars,” said Shinnick. “We’ll also be getting some new technology, upgrading the computers in our cars.”

It would also use $53,560 for park improvements and $50,000 for equipment for its buildings and grounds department.