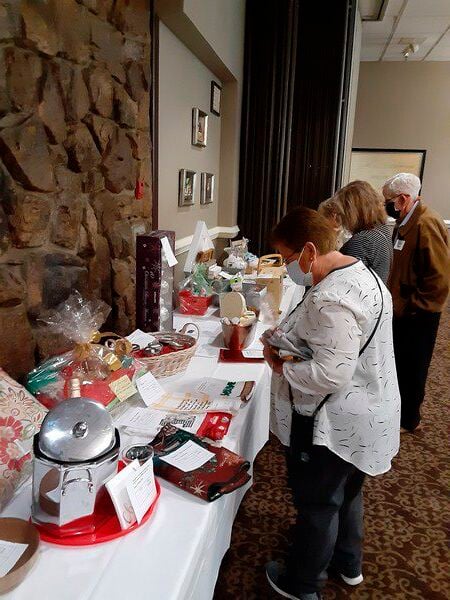 Though COVID-19 forced the Dalton Whitfield Murray Retired Educators Association to switch from an auction to a Christmas market this year, quality items and bargain deals were still plentiful on Thursday at the Dalton Golf & Country Club. 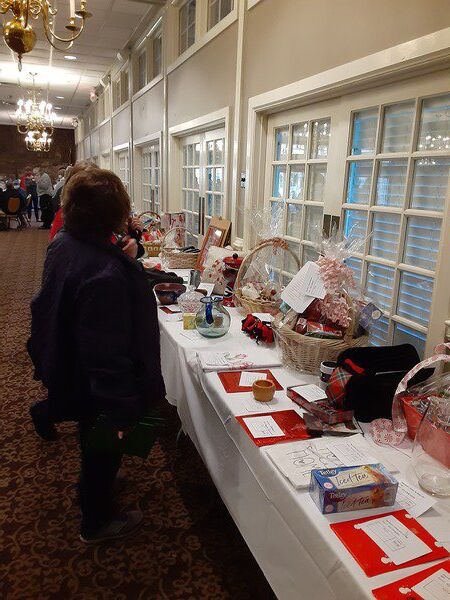 Though COVID-19 forced the Dalton Whitfield Murray Retired Educators Association to switch from an auction to a Christmas market this year, quality items and bargain deals were still plentiful on Thursday at the Dalton Golf & Country Club.

Though the Dalton Whitfield Murray Retired Educators Association switched its annual live and silent auction fundraiser to a Christmas market this year due to COVID-19, the variety, quality and prices of items still satisfied shoppers.

"This is my first time here — my friend wanted to come, so I came with her because I wanted to see what they had — and there's good variety (at) good prices," said Susan Muia, who snagged a gift basket for only $10, as well as a shirt and an etched ornament on Thursday at the Dalton Golf & Country Club. "(I'll) absolutely come back" next year.

The large number of baskets was among the highlights of the market, and because many of the baskets were full of numerous items, "people can break them up and use them as gifts for lots of different people" this holiday season, said Twinkle Chitwood, who co-chairs this event with Dorothy Gray. "They're really pretty baskets, and we've tried to price everything reasonably, because we know people are strapped for cash this year."

The planning committee also didn't solicit donations from businesses this year, as it typically would, because "we know how they've been impacted by the" economic downturn wrought by the pandemic, although "some gave anyway," said Gray, who was a teacher for Whitfield County Schools and worked in the central office prior to retirement. For example, "Shaw Industries made a really nice donation."

The majority of items in the market came from individual donors, and donors also contributed monetarily, so Gray was cautiously optimistic the group can still hit its annual goal of $10,000 raised, despite changing the event from a silent and live auction to a market, she said. All funds raised go to scholarships for local high school seniors entering the field of education and to upperclassmen at Dalton State College who have committed to education.

Awarding scholarships to Dalton State students in addition to high school students in Dalton, Murray County and Whitfield County is a recent change, but a judicious one, said Palmer Griffin, a retired educator and the current vice chairman of the Dalton Board of Education. "You need to qualify to get into the school of education at Dalton State, so (these students) are committed, and they have to be a resident of Murray County or Whitfield County to qualify for the scholarships."

"They can always use money to finish up their education, and naturally our desire is that they'll teach in one of the local systems" after they graduate from college, Griffin added. "Dalton State has been a great partner, and we look forward to continuing this with them."

Sally Butler is a regular at this event, and "the big deal is raising money for the scholarship fund," she said. "We need (to) fund that."

Plus, "it's good to see everybody" at this event each year, said Butler, who picked up multiple gift certificates to give as Christmas presents at the market. "Some people you only see here, not around town."

"Some people I only see once a year, so I come every year for the companionship," said Melanie Wilson, who bought several items from the market, including "a nice, soft blanket for my grandson." The "items are good, and the food is always good."

This year's event discontinued the usual buffet-style lunch and instead offered boxed meals due to the pandemic, Gray said. Masks and social distancing were encouraged.

Both Butler and Wilson are eager for this event to revert to its previous form next year, when the pandemic hopefully is no longer a concern.

"The auction is always fun, and (Whitfield County Sheriff Scott) Chitwood does a great job" as the auctioneer, Butler said. "I'll be glad to have that back next year."

Both women commended organizers for managing to conduct the event during this pandemic year, albeit in a modified format.

"A big shoutout to Dorothy, Twinkle" and the rest of their small committee, Wilson said. "They've worked so hard today, and all year."

"We never really stop with this," said Twinkle Chitwood, who was a longtime teacher — mostly in fifth grade — for Dalton Public Schools before she retired. "We collect things throughout the year."