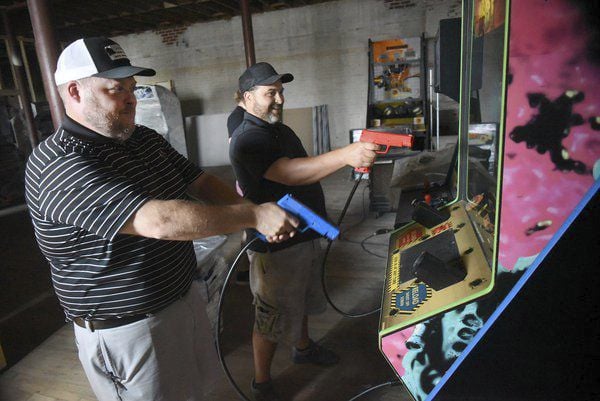 Stewart Stanley, left, and Kasey Carpenter play the video game "Area 51" at the Brewcade, a retro arcade in downtown Dalton connected to Cherokee Brewing + Pizza Co. The Brewcade is expected to open at the beginning of August. 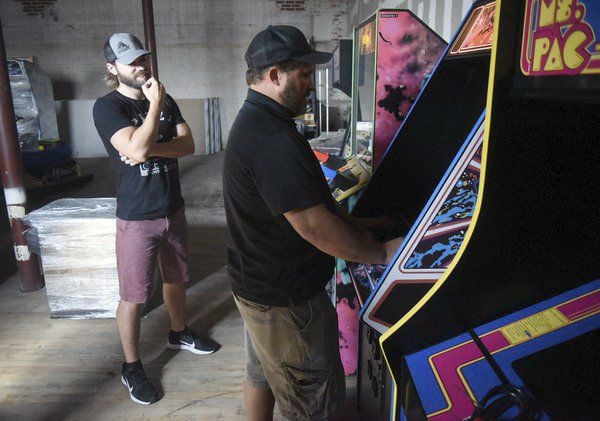 Stewart Stanley, left, and Kasey Carpenter play the video game "Area 51" at the Brewcade, a retro arcade in downtown Dalton connected to Cherokee Brewing + Pizza Co. The Brewcade is expected to open at the beginning of August.

The lineup at the soon-to-open Brewcade, a retro arcade in downtown Dalton, reads like an old school video game lover's dream.

Brewcade co-owners Kasey Carpenter and Stewart Stanley hope you'll have a fun time reliving nostalgic memories — and also making new ones. The retro arcade, which will be connected to Cherokee Brewing + Pizza Co. on Cuyler Street, features close to 50 arcade games. It is expected to open in early August.

"It becomes an outing, like a family outing," said Stanley, who along with Carpenter also owns Cherokee Brewing + Pizza Co. "You can eat, you can play games. I understand it's games, and we've got games on their phones, but with this there's a different component. It's more interactive. It's not going to the park, but you're getting out and doing something with your family, with your friends as opposed to just sitting in your room with your nose in the phone."

At the Brewcade — whose name incorporates the brewery aspect of the restaurant — patrons will pay by the half hour ($6) or hour ($10). All games will be on free play, so you can leave your quarters at home. The number of people in the arcade will be limited to about 50. Patrons will be given an LED wristband that will alert them when their allotted time is about to run out and when it expires. The Brewcade will open for birthday parties and corporate events.

The arcade scene took off in the late 1970s and early 1980s as teens packed malls to hang out with their friends and play the latest games. With the advent of home video game systems in the mid-1980s, the arcade teetered on extinction as people could play just as entertaining games with similarly sharp graphics and sound in the comfort of their home. In the arcade heyday, Dalton had two popular arcades — Funway U.S.A. in Bry-man's Plaza and Time-Out, which is still open in the Dalton Mall.

Retro arcades have become a trend in larger cities such as Asheville, North Carolina, Atlanta, Chattanooga and Nashville. When Cherokee Brewing + Pizza Co. was planning to open in the fall of 2016, Stanley said they joked about putting video games in the restaurant because pizza, beer and video games are a natural fit.

"I think as far as the idea of doing it and the space that we've got available, I think it's a no-brainer," Stanley said. "It's good for the town, good for the restaurant, good for our kids, good for the 40-something-year-old kids."

While vacationing on the Georgia coast, the Stanley family often stops in Brunswick to visit Pinball Palace, a retro arcade with pinball machines and video games. He usually has to drag his young children out after their two hours of playtime is up.

"That spurred the idea and it really came to fruition in about two weeks," Carpenter said. "We've only been on this thing since mid-June."

Carpenter posted a question on Facebook asking which games the public would want at a retro arcade. The suggestions came pouring in. Earlier this month, Carpenter and Stanley drove to St. Louis to buy 31 games from the Arcades Market, a vintage arcade game distributor. They brought the games back to Dalton in a 24-foot rented van. There were so many games, the overflow was put on Stanley's SUV trailer.

Which games were personal must-haves? For Carpenter, it was "R.B.I. Baseball" and "Track & Field." Stanley had to have "Double Dragon" and "Gauntlet."

Downtown Dalton has seen an uptick in activity in recent years, and Carpenter has been a part of that resurgence. In addition to Cherokee Brewing + Pizza Co., he reopened the Oakwood Cafe in the early 2000s and is remodeling a former bank on Cuyler Street into a 32-room boutique hotel, aptly named The Carpentry. Several restaurants and bars have sprung up in downtown and another brewery, Dalton Brewing Co., opened last year. The Brewcade is a continuation of that growth downtown, Carpenter said.

"We've got to provide places for people to eat, people to shop, people to live, so this is just another extension of that," Carpenter said. "Give them something to do. There's a void of things for young kids to do in town and this will just add another level for that."