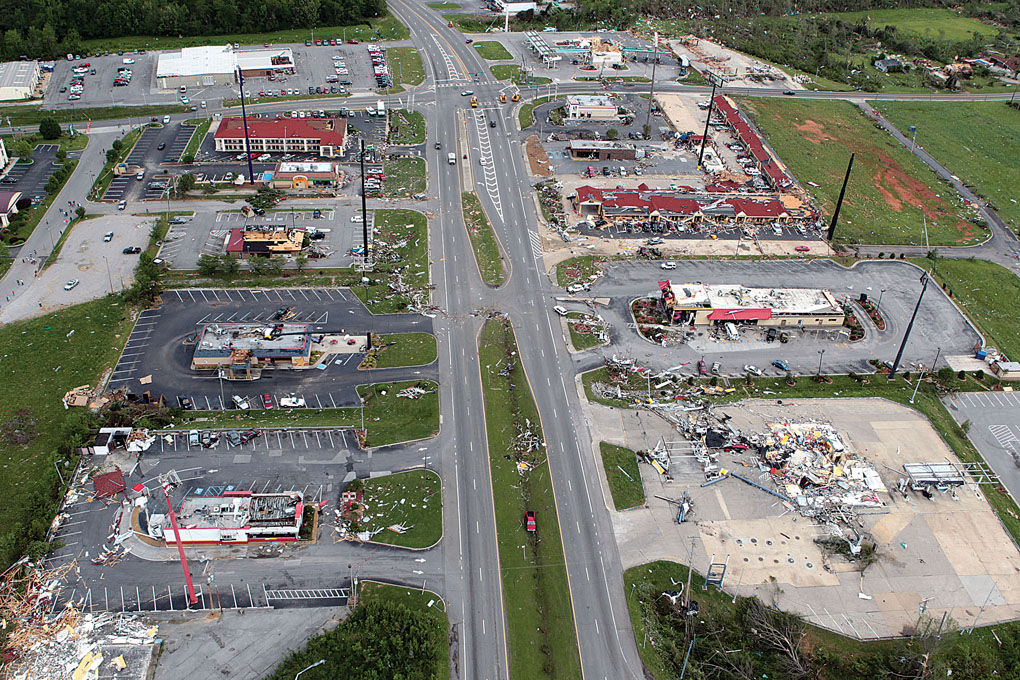 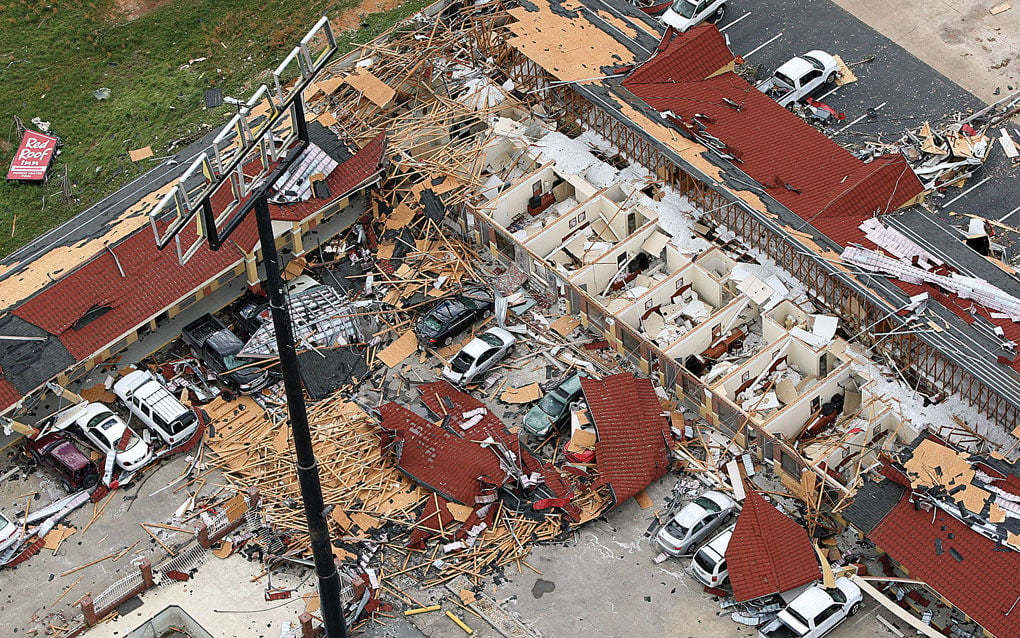 110428 Atlanta; A Red Roof Inn is shown with the roof ripped off of it destroyed by a Tornado Thursday afternoon in Ringgold, Ga., April 28, 2011. A tornado hit Ringgold late Wednesday evening. Jason Getz jgetz@ajc.com 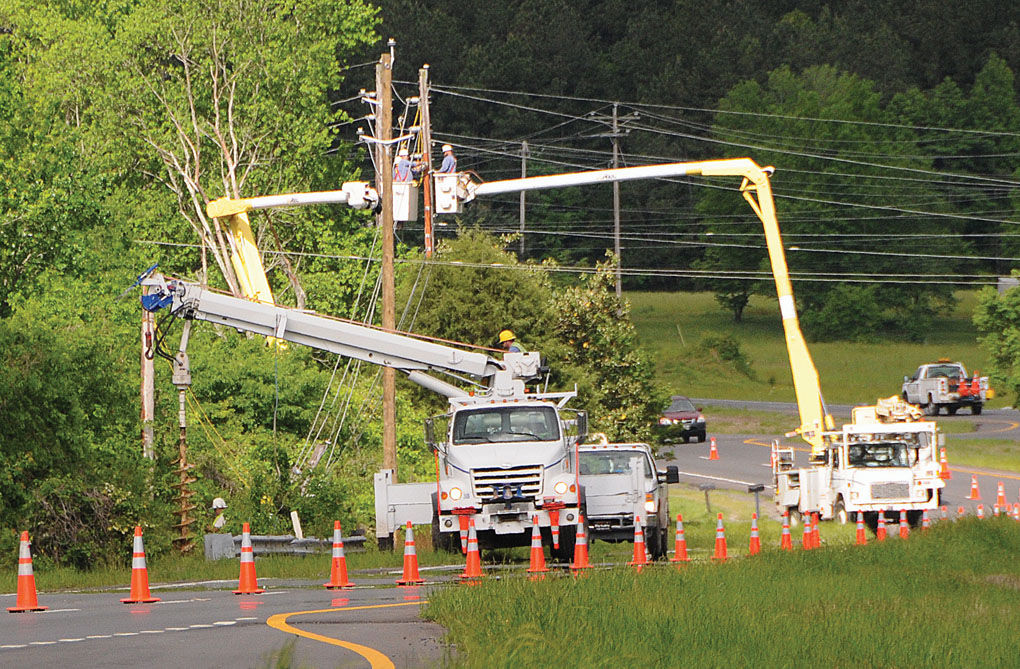 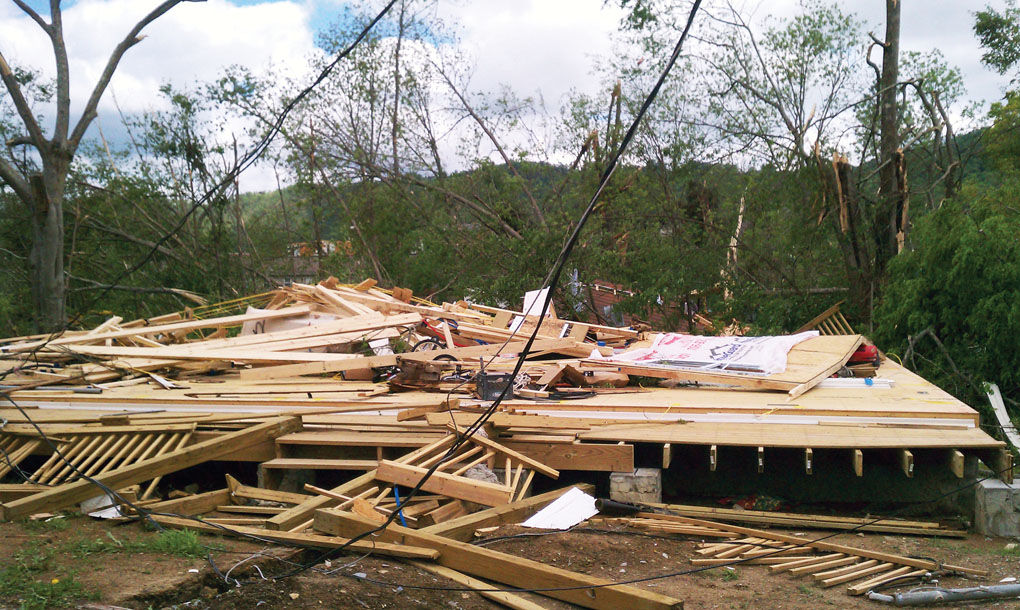 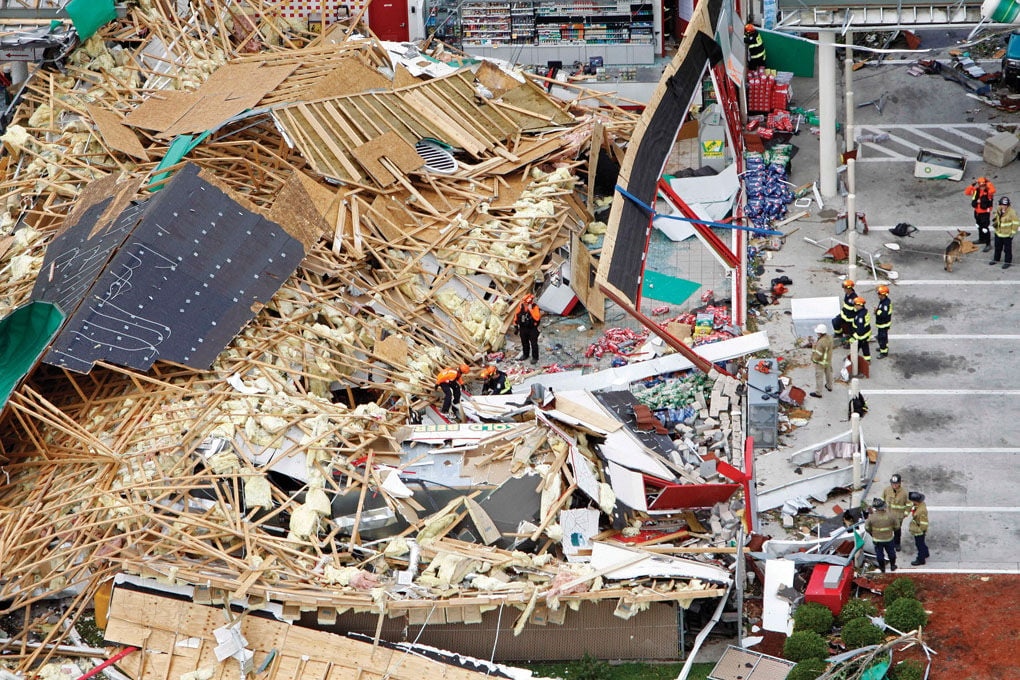 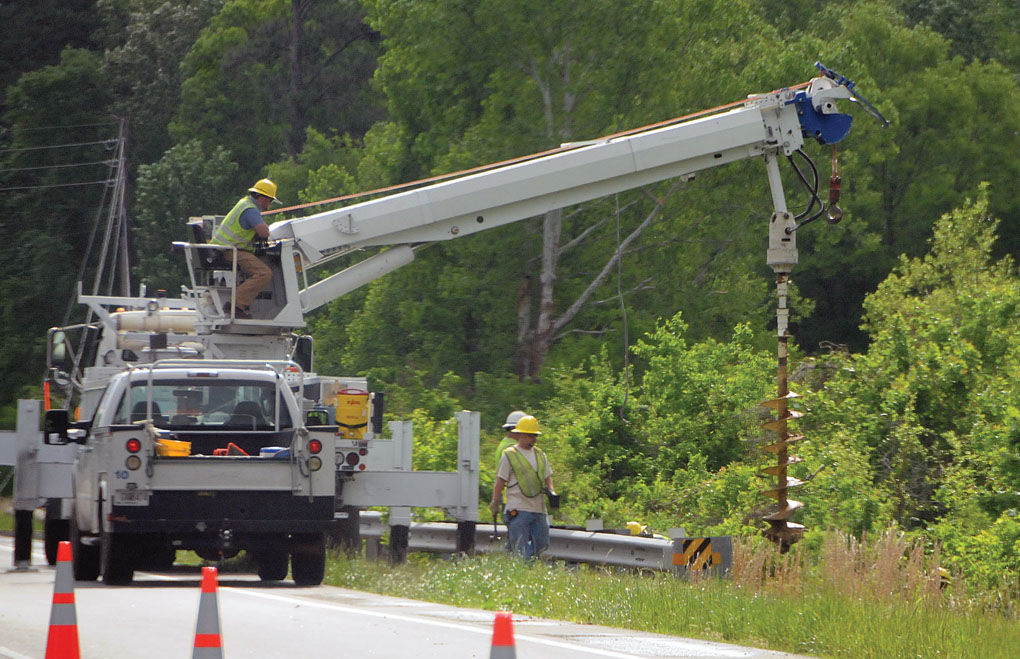 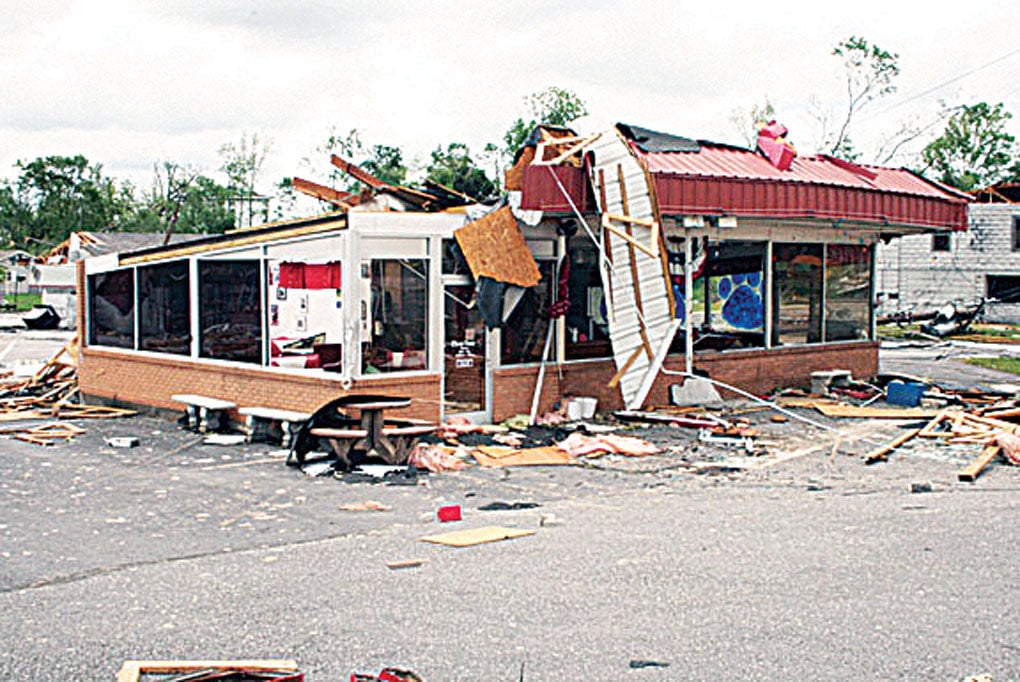 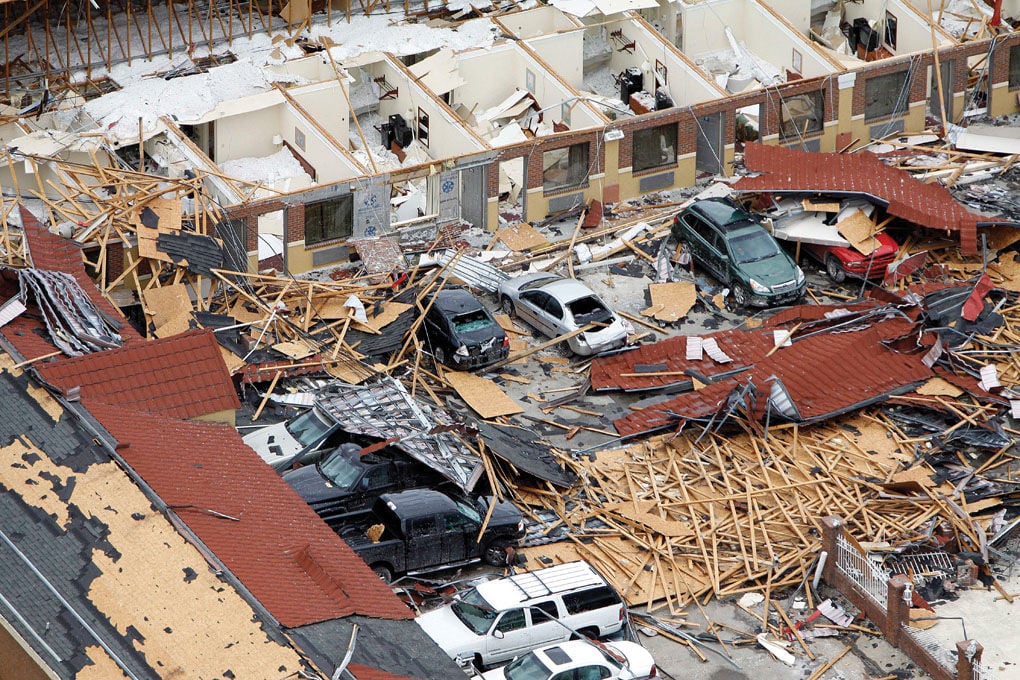 110428 Atlanta; A Red Roof Inn is shown with the roof ripped off of it destroyed by a Tornado Thursday afternoon in Ringgold, Ga., April 28, 2011. A tornado hit Ringgold late Wednesday evening. Jason Getz jgetz@ajc.com

Danny Adams was carrying a worn pillowcase with some of his belongings on Thursday and wondering what to do about the home he and his family were building for his 74-year-old mother at 48 Shady Place near Ringgold High School.

The woman was unhurt after hiding in a closet at her current home as a tornado swept through, but the house they were building was destroyed with more than $30,000 apparently down the drain, Adams said.

“Her house — we got it dried in, siding, plumbing, electrical, A/C, and we were waiting on inspection with no insurance — and now it’s level,” he said.

Not since the 1960s when Interstate 75 was being built had a tornado come through the town, said Mayor Joe Barger. Even then, he added, the destruction was nothing like the twister that swept through the town of 3,000 at about 8 p.m. on Wednesday, killing at least eight, injuring numerous others and demolishing dozens of restaurants, homes and businesses in its path.

“It’s just hard to imagine that nature can be this devastating,” said Gov. Nathan Deal, who stopped in Ringgold around noon after surveying the north Georgia damage in a helicopter. “Having seen tornado effects in the past, I am familiar with the damage they can do, but this is an unusually wide swath that was cut with this area here ... We’re very fortunate quite honestly that we did not have more loss of life because it covered a very large area across northwest Georgia.”

Deal has declared a state of emergency for 16 Georgia counties and was asking for a federal declaration of emergency. Trenton in Dade County was also hard hit with officials there reporting at least two confirmed deaths and numerous injuries. Both Trenton and Ringgold had set up makeshift triage centers to care for the injured. At least some of Ringgold was without water since pump stations serving parts of the city were unable to operate without electricity.

Downtown Ringgold was closed off to nearly everyone but emergency workers and residents. Some 300 people were called in, many of them volunteers, to respond to the city still littered with downed power lines, shattered buildings and fallen trees.

Leroy Wilson of Angel EMS said he was among the first rescue workers to respond after the tornado cut a path down Ga. Highway 151, then downtown.

“Somebody very frantically was on the radio screaming for help, and it had just happened,” Wilson said. “He said there were cars turned over, people bleeding. We were the first ambulance on the scene. We got as far as McDonald’s, and people flagged us down. We ran into three at the Shell station that was flattened. There’s nothing left there. It’s flat.”

Survivors used the words “flat” and “shredded” repeatedly as they described the buildings and homes that were demolished. On Ga. Highway 151, also known as Alabama Highway, the McDonald’s, the Taco Bell and several gas stations were destroyed. On Nashville Street going through downtown, the Catoosa County Department of Family and Children Services was annihilated as were several businesses along the way. Businesses on Nashville Street closer to the Ringgold Depot and White Oak Mountain fared better.

Near the railroad tracks close to Railroad Produce, Ringgold High School student Zack Cody waited for a train to finish crossing so he could return home.

“It hit about five miles from my house,” Cody said. “I had a friend pass away, but I won’t say his name.”

Charley English, head of the Georgia Emergency Management Agency, said at a press conference that getting a federal declaration of emergency would help people who might not have “the proper insurance” to replace their homes and belongings. Deal said those who have no other place to call may phone the governor’s office at (404) 656-1776 for assistance.

State Sen. Jeff Mullis said officials are still looking into how to address the fact students won’t be able to attend school. Mullis was among several other elected officials who stood with Deal as he held a brief press conference in Ringgold.

“There are 2,000 students (across the state) that are kind of displaced,” Mullis said. “We’ll do everything we need to do to make that work. We just don’t know what that is yet.”

English said emergency workers are prioritizing their response to the destruction.

“First of all we’re going to make sure people have shelter, then we’re going to work about getting people back in their homes,” English said. “... The governor has charged state assets with folding in and supporting local resources. We’re going to help people get back on their feet. We’re going to take care of life safety issues, and then we can concern ourselves with recovering later, and we’re doing that in those ... counties that have been significantly impacted, and we’re continuing to survey in other areas.”

Mr. Stephen Dewayne McClure, age 51, of Tunnel Hill, Georgia, departed this life Tuesday morning, November 24, 2020 at his home surrounded by his loving family. Dewayne was born September 30, 1969 in Ringgold, Georgia. Dewayne was a 1987 graduate of Northwest High School and was an electrici…