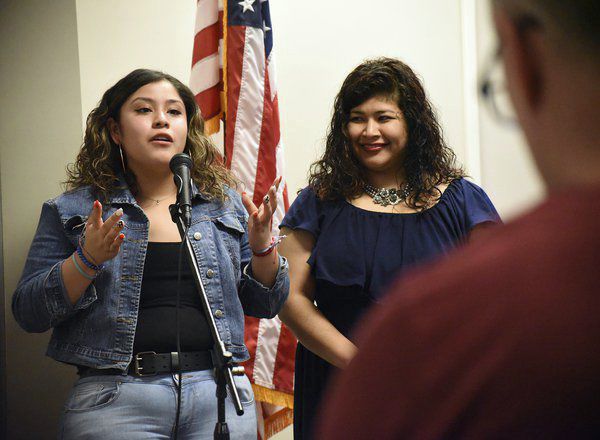 Dalton Middle School student Lizzy Muñoz, 13, speaks Thursday at the Mack Gaston Community Center as Alma Fraire looks on during a celebration of learning event with English to Speakers of Other Languages families. 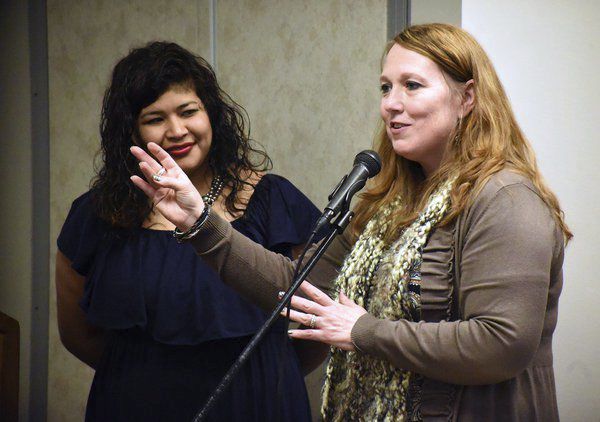 Lauri Johnson, principal of Dalton Middle School, discusses the success of the school's English learners on Thursday as Alma Fraire looks on at the Mack Gaston Community Center.

Dalton Middle School student Lizzy Muñoz, 13, speaks Thursday at the Mack Gaston Community Center as Alma Fraire looks on during a celebration of learning event with English to Speakers of Other Languages families.

Lauri Johnson, principal of Dalton Middle School, discusses the success of the school's English learners on Thursday as Alma Fraire looks on at the Mack Gaston Community Center.

Dalton Middle School celebrated the joy of learning with its ESOL families Thursday at the Mack Gaston Community Center.

Students in the school's English to Speakers of Other Languages program have been known to jump 20-30 points on tests in the span of a few months or leap multiple grade levels in six months, so "we want to stop and celebrate them," said Heather Lawson, an assistant principal at the middle school who coordinates the ESOL program. "They have such a desire to learn."

The "hidden secret" of the middle school is the strides made by EL students during their three years there, said Lauri Johnson, the middle school's principal. "Data shows vast improvement" in reading, writing and speaking English, and "the more success (students) have, the more they come out of their shells."

Indeed, "I feel more confident than when I didn't know anything," said Anderson Lopez, 15, an eighth-grader at the middle school and a graduate of the ESOL program. "Before, I didn't have any confidence in myself."

Teachers making connections with students is a pivotal part of these linguistic triumphs, and the middle school's teachers "genuinely love your kids," Johnson told parents on Thursday. "That is part of the reason we are seeing the success we are."

Educational breakthroughs can only occur when there's faith in teachers by students, said Taylor Ruggiero, who co-teaches with Julie Barnstead in the middle school's ESOL program. "It's all about relationships."

"To learn, you have to be willing to make mistakes," and in order to be vulnerable enough to try and fail, students "have to trust you," Ruggiero added. "The more they trust you, the more they grow and build."

On Thursday, families learned how to help their children prepare for tests — including the Assessing Comprehension and Communication in English State-to-State for English Language Learners (ACCESS) exam, which will take place later this month and early next month — and understand data reports for their children. Additionally, tips on how families can work together with school personnel to help students achieve greatness were discussed.

In the middle school's ESOL program, parents are given "a point person so we can get on the same page despite the language barrier," Johnson said. In addition, "we have several dual language teachers who teach ESOL."

Lawson, Dalton Public Schools' 2009 Tom Jones Educator of the Year, appreciates the staffing investment made by the school system, as the middle school is able to offer immensely individualized instruction even with more than 200 students currently in the ESOL program. Those personal relationships extend beyond teachers to Lawson herself, too.

"I schedule all these kids, so I know them by heart," she said. The ESOL program "becomes a family for our kids, and we're blessed."

Lawson took over the middle school's ESOL program three years ago when she became an assistant principal because of her background in the field.

"I have a heart for these students," she said. "They try so hard."

Ruggiero believes ESOL students "work twice as hard as any other student, period."

"Imagine you're in high school trying to read Shakespeare, and then imagine you're trying to do that and don't speak English," she said. "It's like (climbing) Mount Everest."

However, the most rewarding part of her job is seeing the extraordinary progress students make in only a few years, she said. "I ran into a couple of former students tonight, and I heard them speak perfect English."

Lopez came to America from Guatemala without any English abilities at all, but he's since graduated out of the ESOL program.

"It was hard," he said. "The speaking part was the hardest."

Passing the ACCESS test is a critical element in exiting ESOL, and the assessment examines the English speaking, reading, writing and listening abilities of students, Ruggiero said. "It is one of the most difficult tests I've seen given to students."

Lopez credits his teachers with delivering both the knowledge and the confidence to excel with English.

"Teachers told me, 'You can do this, you can make it, you can pass it,'" he said. "They helped me a lot with those words."