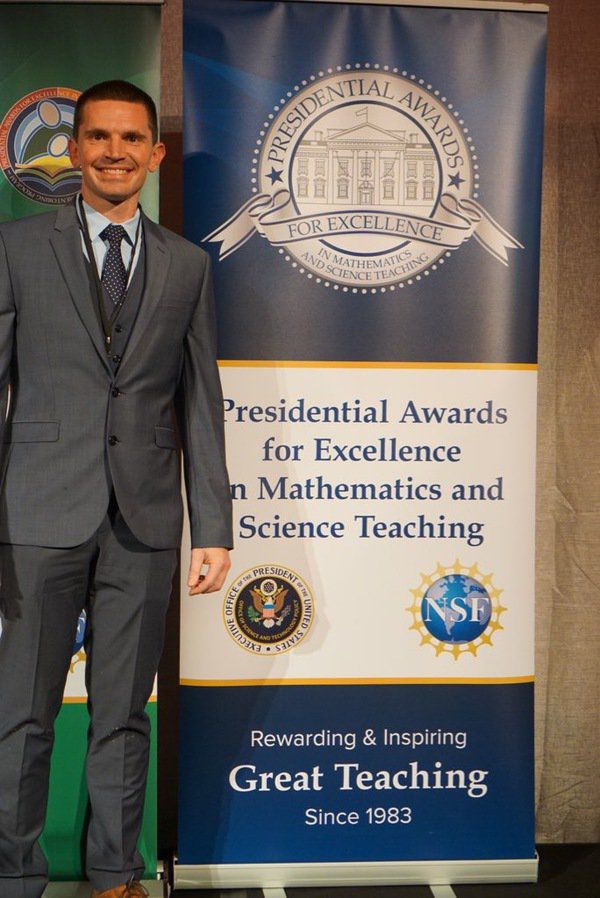 Billy Singletary, a math teacher at Coahulla Creek High School, received the Presidential Award for Excellence in Mathematics and Science Teaching, the highest award kindergarten through 12th grade teachers of science, technology, engineering, math and computer science (STEM) can receive in the US. 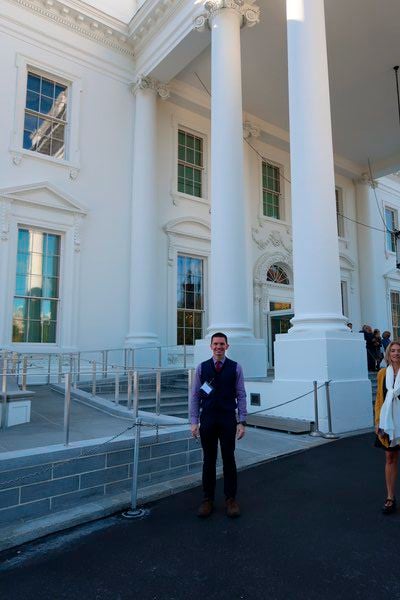 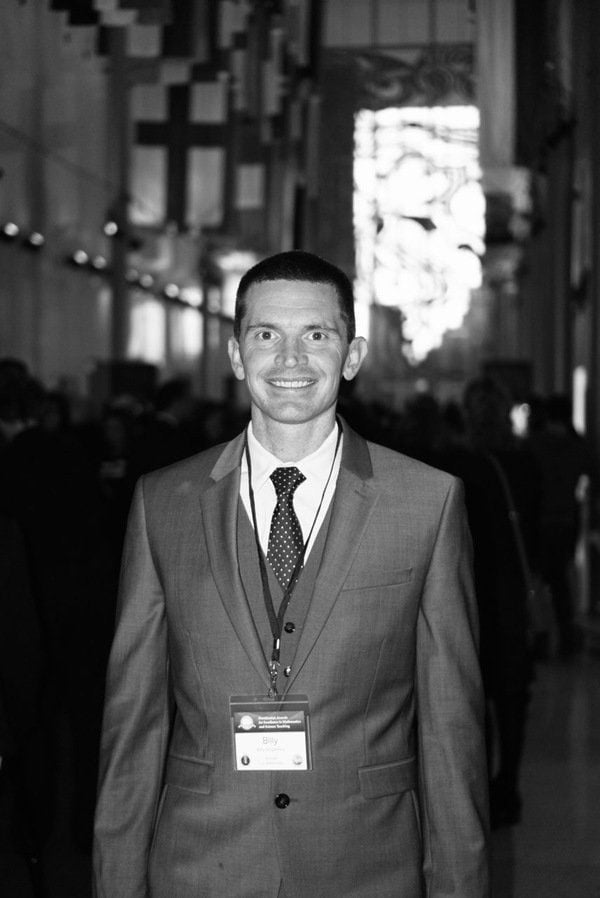 No matter how many commendations like the Presidential Award for Excellence Billy Singletary may receive, "my real trophy is the success of my students," he said. "That's the trophy I care about."

Billy Singletary, a math teacher at Coahulla Creek High School, received the Presidential Award for Excellence in Mathematics and Science Teaching, the highest award kindergarten through 12th grade teachers of science, technology, engineering, math and computer science (STEM) can receive in the US.

No matter how many commendations like the Presidential Award for Excellence Billy Singletary may receive, "my real trophy is the success of my students," he said. "That's the trophy I care about."

As a child, Billy Singletary wanted to be a mail carrier until a teacher suggested he might be a math educator. Now years later, Singletary is a recipient of the Presidential Award for Excellence in Mathematics and Science Teaching, an honor that included an invitation to the White House.

"It's an honor to represent teachers at Coahulla Creek, in Whitfield County Schools and Georgia," said Singletary, one of four teachers in the state to receive the Presidential Award for Excellence in Mathematics and Science Teaching in this round of awards.

Singletary, who has taught math at Coahulla Creek since 2012, never believed he'd reach this rarefied air, explaining, "I thought it would be good for Coahulla Creek just to have a nominee."

"Growing up in difficult circumstances, even mail carrier seemed like a reach to me," Singletary said, until Susie Brown inspired him that he could be a math teacher. Coincidentally, Brown was a language arts teacher, but she also taught math, and because the latter wasn't her specialty, she was open with students about the fact she wasn't a math expert.

In fact, she even allowed the mathematically-precocious Singletary to help instruct the class at times, he said. That experience, and her encouragement, gave him the confidence he could one day teach the subject.

Following his years at Clinch County High School in south Georgia and Lee University in Cleveland, Tennessee, Singletary "knew math," but when he started teaching at Eastbrook Middle School in 2005, he realized his classroom management skills lagged far behind his mathematical brilliance, he said.

"I was a terrible first-year teacher; I had no idea what I was doing," he said.

He's since learned, however, that ameliorating education methods "doesn't require one grand idea, but thousands of small things," he said. For example, Singletary eliminates potential distractions in his classrooms the best he can, and he'll change gears on topics roughly every 10 minutes so students don't have a chance to get bored or off task.

Singletary is a leader not only in his building, but with teachers at other schools, said Tracy Mardis, Coahulla Creek's principal. Singletary is "a researcher who is always looking for ways to be better," Mardis said.

Singletary understands there's "no one way that works with every kid," so he provides his students multiple ways they can solve problems, and "our kids love him," Mardis added.

"He challenges them, for sure, but he makes it fun, and he cares and loves them," Mardis said.

Because of his early struggles, Singletary is often an ideal mentor for other young teachers, and he's performed that function both formally and informally for educators at his own school, other schools in the system and in other states, Singletary said. He's led professional development sessions, and his wife's former students — she's a professor at Lee University — often call him for advice early in their careers.

Tom Appelman, director of high school curriculum for Whitfield County Schools, taught math for three decades, so he understands how difficult it is to engage students in math. But Singletary's communication skills routinely capture the attention of his students, he said.

"His kids always achieve, and we have him talk to our new teachers to share techniques," Appelman said.

Singletary "is one of the people I lean on and trust," Appelman added. If Singletary says an instructional technique works with students, "that's what we'll do."

"Every day, do something better," he said.

Or as Maya Angelou expressed in one of Singletary's favorite quotes: "Do the best you can until you know better. Then, when you know better, do better."

"Math is hard," Singletary acknowledged. "It took humans thousands of years to put these things together, so it should be hard, but our students can do hard things."

Mardis has witnessed Singletary's impact on numerous Coahulla Creek students, including his own children, he said.

"My son, who graduated last year, had him, and I have a freshman now, who has him this year, and as a parent you couldn't ask for anybody better to teach your kids." Mardis said.

"You can tell how good a teacher is by how many other teachers want their own kids to have (that person) as a teacher, and Billy is one of those rare few," Appelman said. "Teachers know."

Singletary teaches a litany of math classes, but his favorite is statistics because it "has so many real-world applications," he said.

In October, Singletary — who had never visited the nation's capital previously — and his fellow award recipients enjoyed dinner at the Kennedy Center, "a beautiful setting," and heard from "impressive" speakers like Joan Ferrini-Mundy, president of the University of Maine and chief operating officer of the National Science Foundation.

Typically, primary and secondary teachers are recognized in alternating years, but "they got behind," so recipients of the Presidential Award for Excellence in Mathematics and Science Teaching for the last couple of years were announced at once, with Singletary technically being a 2017 honoree, he said. Singletary was nominated in November 2016 by Appelman, and this recognition is the highest award kindergarten-12th-grade teachers of science, technology, engineering, math and computer science (STEM) can receive in the U.S.

Following his initial nomination, the process was "very intense," including one of Singletary's lessons being recorded and him writing at length about his teaching methods, he said. All of that information went to the National Science Foundation, and Singletary learned he was a finalist in August 2017.

That led to continued review and "a very long wait," Singletary said with a smile. Finally, he received his invitation from the White House in early October, and he was joined on the trip by his wife, Laura, and their 14-month-old daughter, Eleanor.

During the STEM education summit at the White House, Singletary and the other award recipients reviewed and commented on the national STEM education five-year plan. Singletary was especially pleased one of the plan's pillars is making math "magnetic, a thing students want to do," he said. It's no secret math isn't a favorite subject for many students, but Singletary has learned that building relationships with his charges is the first, and most pivotal, step in engaging them.

"I believe in them, but sometimes it takes a while for them to believe in themselves, so, as teachers, we have to carry them along until they get to that point," he said. "We need to continue inspiring students to reach beyond what they think they are capable of."

He also strives to make his classroom a collaborative environment, he said.

"Having questions is a good thing, because you're learning and growing," he said.

Additionally, he regularly speaks to students about how math can lead to career opportunities, and "any time I can bring in a real-world experiment, I do," he said. For example, his class was learning about linear progression this fall and as part of that lesson, they tossed Barbie dolls over the side of a school balcony with rubber bands attached to them and observed how close various dolls could get to the ground without hitting their heads.

Singletary certainly feels at home at Coahulla Creek, a school staffed with "exceptional teachers and incredible administrators and support staff," he said. "We have amazing students, too."

Someone recently asked Singletary if he'll "forget about 'the little people'" now that he's won a prestigious award and been to the White House. Singletary responded, "I don't know any 'little people,'" he explained. "I'm surrounded by greatness."

No matter how many commendations like the Presidential Award for Excellence Singletary may receive, "my real trophy is the success of my students," he said. "That's the trophy I care about."