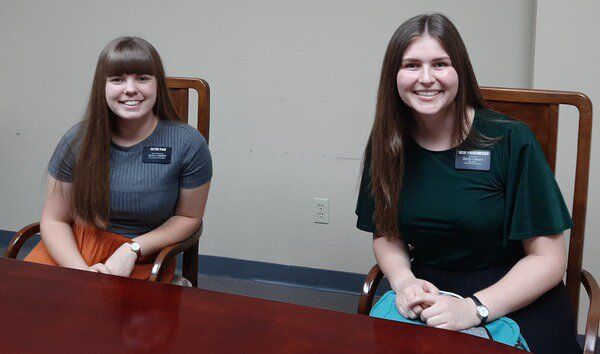 Sister Mikayla Pack, left, and Sister Olivia Freidenberger, missionaries for the Church of Jesus Christ of Latter-day Saints, are spending part of their 18-month missions in Dalton.

Sister Mikayla Pack, left, and Sister Olivia Freidenberger, missionaries for the Church of Jesus Christ of Latter-day Saints, discuss how they are helping to spread their message in Dalton.

Sister Mikayla Pack, left, and Sister Olivia Freidenberger, missionaries for the Church of Jesus Christ of Latter-day Saints, are spending part of their 18-month missions in Dalton.

Sister Mikayla Pack, left, and Sister Olivia Freidenberger, missionaries for the Church of Jesus Christ of Latter-day Saints, discuss how they are helping to spread their message in Dalton.

As with many other endeavors, the COVID-19 pandemic has had a major impact on mission work.

"It used to be a lot of knocking on doors," said Sister Mikayla Pack, a missionary for the Church of Jesus Christ of Latter-day Saints from Blackfoot, Idaho, currently serving in Dalton. "We try to contact as many people as we can, so that we can talk to them about the message that we share, a lot of one-on-one interaction."

When the pandemic hit in 2020, Pack said, the church moved much of its mission work online, contacting people by social media, email or telephone.

"Now, we are doing some of both," she said. "We are meeting people in their homes, passing out literature."

The Church of Jesus Christ of Latter-day Saints has a long history in the Dalton area. The church's website is churchofjesuschrist.org.

"Missionary work in this area dates back to at least the 1870s and Joseph Standing," said Ron Shinnick, a member and former bishop of the Dalton ward.

Standing was a missionary killed by a mob near Varnell in 1879 because of his efforts to spread the word of his religion.

Today, the Dalton ward is at 610 Shugart Road, near the intersection with Waugh Street.

"We have two congregations, with a total of about 800 people," said Shinnick. "One is a Spanish-speaking congregation, and the other is English."

Sister Olivia Freidenberger, a missionary from Boise, Idaho, said some people are more receptive to their message than others.

"Different people are at different stages of their spiritual journey," she said. "We definitely respect that. We try to find those who are seeking for answers."

Both women are 20 and are serving 18-month missions. That's typical, they said, for women. Male members of the church serve a 24-month mission.

"For the young men in our church, there is an expectation that they will experience a mission, to go out and serve the Lord," said Pack. "For young women, it is recommended. It is definitely encouraged but it is not as expected."

They said no one is required to go on a mission. Each person must feel a call from the Lord.

They said that for both young men and young women the missionary experience is very similar.

"As missionaries, we spend all of our time serving the Lord, doing community service and sharing the message of Jesus Christ, helping people to develop and grow their relationships with God," Freidenberger said.

The church has commonly been called by others as the Mormons, which comes from one of the church's scriptures "The Book of Mormon," believed to have been compiled by an ancient prophet living in the Americas. But three years ago, church leadership asked that people stop using that word, saying it was a nickname bestowed on it by others and they prefer the church be referred to by its name.

"It (Mormon) is a term that we have been known by," said Pack. "But as a church, we recently asked that we be known as the Church of Jesus Christ of Latter-day Saints because it more accurately reflects who we are."

Freidenberger said one misconception outsiders have is that the church does not believe in Jesus Christ.

"But we do believe in Jesus Christ and the sacrifice he made for us," she said.

In a 2018 statement, church President Russell Nelson wrote the use of the word Mormon might lead people unfamiliar with the church to believe members worshiped Mormon rather Jesus Christ.

"Some people think we only have 'The Book of Mormon,' but we also have the Bible, the King James Bible" said Pack. "We have both and read and study both."