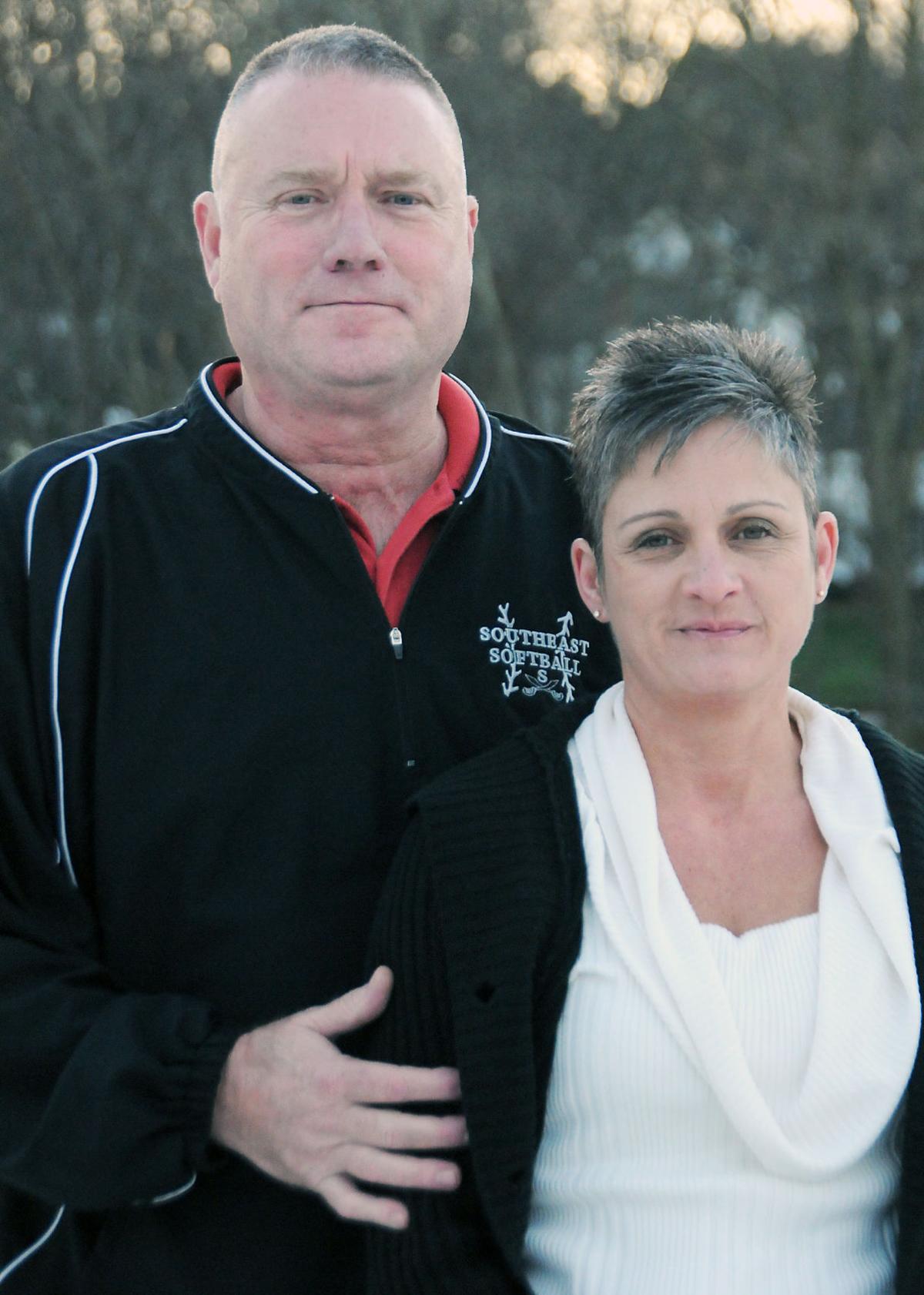 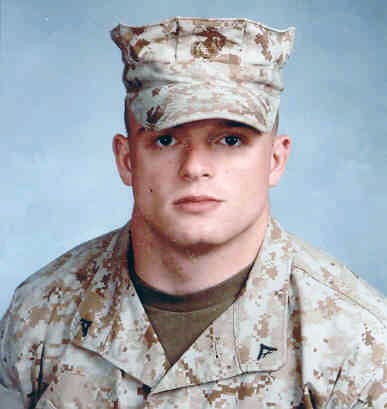 Jeff and Paige McDonald and their youngest daughter Brooke stood on the stage of the giant Barrett-Jackson auction in January, watching as bidding began on a custom 1969 Ford Bronco. Funds raised by the auction would help the Armed Forces Foundation, a group that provides services to veterans, particularly those suffering from post-traumatic stress disorder (PTSD).

Paige McDonald recalls the moment as “bittersweet.” She says she was pleased that so many were showing such strong support for America’s veterans. But she says she couldn’t stop thinking of the reason her family had come to Scottsdale, Ariz., for the auction: her son, U.S. Marine Corps Sgt. Christopher McDonald.

Less that a year earlier, in March 2012, Paige had come home to find that Christopher, a graduate of Southeast Whitfield High School, had taken his life. He was 25.

“He went to North Georgia through his junior year, went to boot camp that summer, and came back and used the GI Bill for his last year there,” said Jeff McDonald, who also served in the Marine Corps Reserve and was activated for Desert Storm.

The pride in Jeff McDonald’s voice is clear when he speaks about his son’s service.

“He was meritoriously promoted to sergeant. The division commander came down to promote him to sergeant. He excelled in everything he did,” Jeff McDonald said.

In 2008, Chris’s unit, the Chattanooga-based Mike Battery, was activated and sent to Iraq.

“He went overseas with the same unit I served with,” said Jeff McDonald, who teaches at Southeast Whitfield High School.

Chris was trained as an artilleryman, but there wasn’t much call for the big guns in Iraq.

“They were going house to house, kicking in the doors. The Iraqi police would identify the bad guys, and the Marines would go get them,” Jeff McDonald said. “He and I talked about it. It’s hard to talk to anyone who hasn’t been in that situation because they just can’t understand. But he told me about what happened over there, and it was ugly.”

Chris spent a year in Iraq, and when he returned his parents noticed a difference. The once outgoing and talkative young man had become quiet and distant.

“Chris and I were always close,” Paige McDonald said. “We talked about everything. But he didn’t want to talk about what happened over there, so I didn’t ask him about that. It was just like when Jeff came back from overseas. I didn’t ask Jeff about anything. If they wanted to talk, I was there to listen. But I didn’t press them. I thought he was just trying to get used to civilian life again. When he was over there, everything was ‘go, go, go.’ There was always something that needed to be done, and civilian life was like slow motion.”

But it turned out to be more serious. Chris was diagnosed by Veterans Administration doctors with PTSD, a severe and long-lasting stress disorder that occurs after people suffer some psychological trauma.

Six months after he returned to the United States, doctors pushed the bones in Chris’s hip back into place.

“The pain went away after that, but by then he was hooked on the pills,” said his father.

What happened after that still leaves his parents confused and frustrated.

In the fall of 2011, Chris told his parents he needed help.

“He told me he was afraid of the pills and he wanted to get off of them. He went to the VA in Atlanta and the one in Chattanooga. Both facilities turned him down,” said Paige McDonald.

“He went to them and told them he had a problem and needed help, he needed inpatient treatment. And they told him, ‘We don’t think your situation warrants it,’” said Jeff McDonald. “That’s not right.”

Chris by then was working as a paraprofessional with Whitfield County Schools and seeming to function OK, but his parents knew he was struggling. At one point they’d asked him to leave their house after finding he’d stolen from them.

“Then Jeff got a phone call from two of his (Chris’s) best friends who said, ‘You don’t know how many pills he’s taking,’” said Paige McDonald.

Family and friends staged an intervention in January 2012.

“He was ready for it and eager to get help,” said Paige McDonald.

After the intervention, Chris spent seven days in a treatment program at Highland Rivers.

“He came out of that so much better. He was Chris again,” said Jeff McDonald.

But he and his family knew that Chris still needed long-term, residential treatment. They’d tried before to get him into such treatment but could not afford any of the programs they found. This time they had more luck.

“I contacted Teen Challenge in Chattanooga, and they said they had a place for him. It was free, but he had to commit to one year. He was willing to do that, but I think he’d backslid by that point and was back on the drugs,” Paige McDonald said. “He was scheduled to go up there on March 16. I came home from lunch to pick him up to go up there, and I found him in the bathtub.”

“Serving those who serve”

Last fall, the McDonalds got a telephone call from Joey Jones, a friend of their son from high school who had also joined the Marine Corps and who lost both his legs during a bomb blast in Afghanistan.

Jones’s wife Meg works with the Armed Forces Foundation, and Jones had told foundation officials about what had happened to Chris.

“Joey called us and told us about the foundation and asked if we would talk to them,” said Jeff McDonald.

Based in Washington, D.C., the Armed Forces Foundation was founded in 2001 to support current and retired service members from all branches of the American armed forces. Its motto is “serving those who serve.”

“We offer financial assistance to military families and veterans, one-time grants for financial emergencies,” said Armed Forces Foundation Chief of Staff Brian Cooke. “We also have what we call recreational therapy programs, such as Troops to the Track. That gets active duty troops and wounded warriors to NASCAR races throughout the year. We do about 26 races a year. We have a Ron White comedy show once a year for the troops.”

“We also have our Help Save Our Troops campaign, which is aimed at raising awareness of PTSD, TBI (traumatic brain injury) and the dramatic increase in military suicides,” Cooke said.

“I’ll talk to anybody”

“We are a nonprofit, and for one of our biggest fundraisers each year we go to Barrett-Jackson, the country’s largest auto auction,” said Cooke. “This year we had a classic 1969 Ford Bronco that had been donated to us that we were auctioning. We wanted to use this as an opportunity to really kick off our Help Save Our Troops campaign, to raise awareness of that.”

The McDonalds say they readily agreed to allow their story to be used in the auction.

“This has got to stop. There are other veterans and their families who are living with this every day,” said Jeff McDonald. “I’ll go anywhere, and I’ll talk to anybody. If we can keep one family from going through what our family has been through, we’ll have been successful.”

The foundation flew the McDonalds to Arizona, where they spent the weekend with foundation President and Executive Director Patricia Driscoll and her boyfriend, NASCAR driver Kurt Busch.

After the bidding was over, the McDonalds got to meet the couple who bought the truck: Donald and Kathleen Damon, who won a $90 million lottery in 2009.

“They go around to these auctions and buy charity cars and then give them back,” said Paige McDonald. “Their grandson actually did the bidding. He said, ‘Grandma gave me the OK to go as high as I needed to go.’ He said he would drive it for a year, then give it back. They were really good people.”

A CMT television production team visited Southeast Whitfield High School on Friday to talk to Jeff McDonald for a segment on an upcoming salute to the troops by comedian Ron White.

“It was great. We spent about two, two-and-a-half hours with them. Joey Jones was there, and they interviewed him as well,” Jeff McDonald said.

The McDonalds say they hope their efforts raise awareness of PTSD and its impact on families.

“There are a lot of veterans in this town, and I’m sure some of them have PTSD. I hope we can let them see they aren’t alone, and I hope we can make sure that help is there for them and for everyone dealing with this,” Jeff McDonald said.