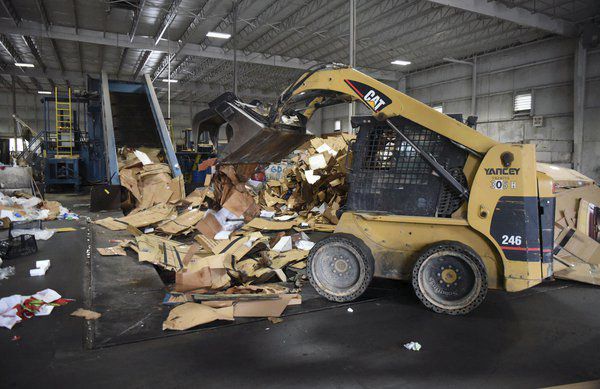 McKenny Pittman uses a skid steer to place cardboard on a conveyor belt to be bound for recycling at the the Dalton-Whitfield Solid Waste Authority. 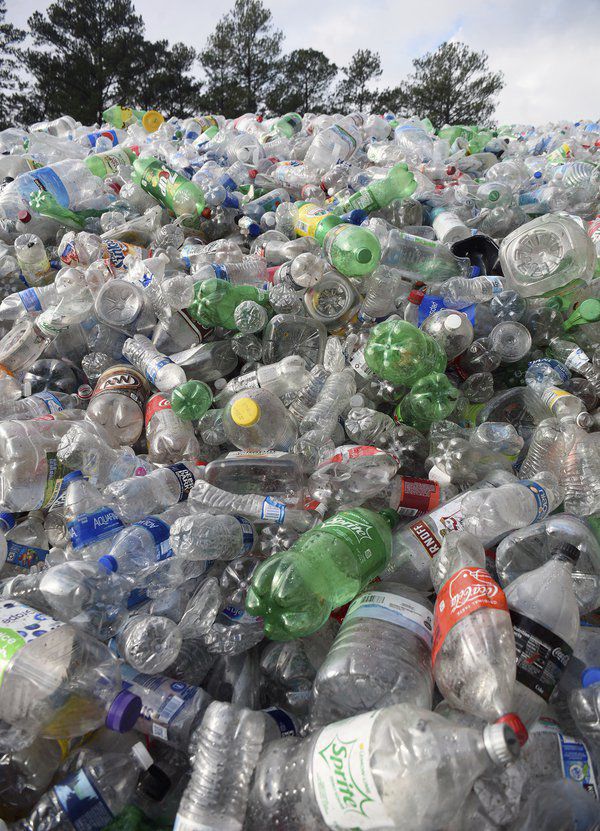 Sorted plastic bottles, ready to be crushed and bound, at the Dalton-Whitfield Solid Waste Authority.

McKenny Pittman uses a skid steer to place cardboard on a conveyor belt to be bound for recycling at the the Dalton-Whitfield Solid Waste Authority.

Sorted plastic bottles, ready to be crushed and bound, at the Dalton-Whitfield Solid Waste Authority.

Recycling is akin to breathing for Michael Noll.

Raised in Germany, residents put their slippers on to fetch the paper in the morning and brought their recyclables out to the curb as well, he said.

Noll said recycling is just second nature to people from his native land. German children learn from an early age about the importance of recycling and to not be wasteful.

“It’s part of the culture. You don’t even think about it. You do it automatically,” he said.

For more than a decade now, he has lived in Valdosta. Noll, professor of geography at Valdosta State University, has observed a difference between a German mentality of reuse and what he sees as an American mentality of waste.

That observation caused Noll to advise Students Against Violating the Environment, a VSU student group that encourages environmentally friendly practices such as recycling and acts as a forum for environmental education.

Living in Valdosta, Noll said the city’s commitment to environmentally conscious practices such as solar-powered plants and curbside recycling programs instills faith in the community that the environment matters.

There is concern, however, that curbside recycling could come to an end.

Walking behind the Valdosta Public Works building, the mountain of recyclables sits prominently.

Tucked behind a Mount Kilimanjaro of bottles and boxes, a bevy of cardboard resides, folded and tidy, Anthony Musgrove, public works superintendent, continues to add more cardboard to his extensive collection for a specific reason: market fluidity.

Usually selling to Miller’s Recycling in Pennsylvania, he kept his cardboard stocks up high, waiting for demand to increase and drive prices up. Noting the bear market, Musgrove mentioned that his broker in Pennsylvania told him the domestic cardboard market is on the rebound. A rebound would mean a better return for his assortment of thick, brown pliable boards and he is prepared.

“We’re going to start shipping a lot of it out,” he said. “There are places in the United States that take this product but with that ban, everything flooded their properties and so that’s why it looks like this.”

The global recycling market flipped on its head in early 2018.

China, the leading importer of recyclable material, declared it would ban importing recyclables. Until then, China handled nearly half of the world’s recyclable materials. Named the “National Sword” policy, the January 2018 ban caused a 99% reduction in plastics imports and a 33% decrease in paper imports from China’s 2017 totals, according to Resource Recycling.

In the United States, the resulting fallout altered the American recycling market where companies here began to capitalize on half the market newly up for grabs. Still, exporters, such as the City of Valdosta, have experienced inflated costs since the Chinese market dried up.

With the changed industry, Valdosta pays Synergy Solutions, located in Cordele, $40 per ton of commingled recycling (a mix of plastic, glass and paper) which separates, processes and ultimately sells the materials for profit, Musgrove said.

The Cordele-based outfit turned out to be a major cost saver when Musgrove compared its $40 per ton rate to $100 per ton by a Jacksonville, Florida, company and $150 per ton by a Tallahassee, Fla., company. None of the three businesses included shipping costs, so he said the city outsourced semi trucks to haul the commingled recycling up to Cordele.

Dalton on a roll

"The city’s curbside recycling program began in October of 1991 when the city council approved a bid from BFI (out of Chattanooga, Tenn.) to perform curbside collection," said Andrew Parker, public works director.

"Approximately 10 years later (around 2002), the city council brought the curbside recycling service in-house managed out of the public works department and it has been that way ever since,” he said.

More than 4,100 households take part in the program, and recyclables are picked up once each week.

"This total includes all recyclable materials as each material is not weighed independently since all materials are transported on the same truck," Parker said. "One important thing to keep in mind is that our monthly average has started to decrease by an average of 25 tons per month since glass is no longer accepted in the curbside program effective October 2019.”

City officials cited safety reasons for eliminating glass from the curbside recycling program, saying employees cut their hands on broken glass. They also cited economic reasons for the move, saying glass recycling is just "break even" financially and the alcohol, soda and other contents of glass containers tend to erode the compartment on recycling trucks the glass is placed in.

The annual budget for the curbside recycling program is $295,000. After receiving a share of revenue generated by the local landfill from the sale of those recyclables and after accounting for the savings from tipping fees saved because recyclables that were diverted from the waste stream, the program has a net cost of about $226,500 per year.

While Dalton is the only city in Whitfield County to offer curbside recycling pickup, the Dalton-Whitfield Solid Waste Authority collects recyclables at its landfill as well as three convenience centers around the county.

The net cost of the recycling program was $25,000 last year.

"Recycling is typically subsidized," Hartline said. "However, with recyclable commodity market pricing at an all-time low, the subsidized amount is greater than normal. The average commodity pricing decreased by 37% from 2018 pricing."