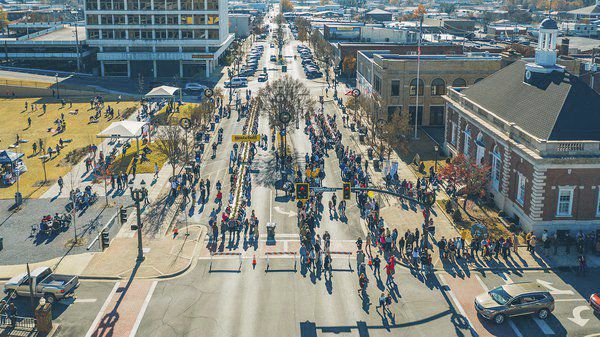 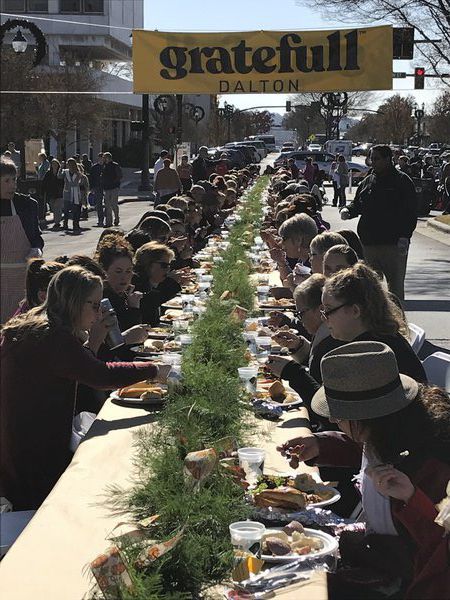 Photo by the City of Dalton

Attendees enjoy a free Thanksgiving meal during the Gratefull event in downtown Dalton on Monday.

Photo by the City of Dalton

Attendees enjoy a free Thanksgiving meal during the Gratefull event in downtown Dalton on Monday.

Angel Ruiz watched as his son gamboled with other young children on the lawn of Dalton's Burr Performing Arts Park on Monday.

"They all just met today," he said. "They are all having a blast together. This is really fun."

Ruiz and his family were among 1,400 people who ate lunch on Monday at Gratefull, a community Thanksgiving meal complete with turkey and dressing held in downtown Dalton. The event was organized by Believe Greater Dalton, a public-private partnership of the Greater Dalton Chamber of Commerce and local governments focused on six strategic areas to improve the community: educational outcomes, housing, entrepreneurship, economic development, downtown development and community pride.

A community member brought the idea for Gratefull to Believe Greater Dalton last year, based on a community dinner that has taken place annually in Chattanooga for the past six years. Several people active with Believe Greater Dalton and other community organizations volunteered at the Chattanooga dinner last year to get a feel for what it takes to put on an event like that and decided they would like to try it here.

The goal was to bring the community together and help Dalton residents make new acquaintances and the event drew a diverse group of people.

"I had one longtime Daltonian tell me that she met 19 new people today," said Allyson Coker, project manager for Believe Greater Dalton.

Organizers blocked off Hamilton Street between Crawford Street and Gordon Street. Tables where volunteers served food donated by local restaurants — everything from turkey and dressing and mashed potatoes to tamales and vegetable lasagna and a wide variety of desserts — were on one side of the median, and a long table for people to sit at was on the other side.

"The food was awesome," said Juan Martinez, one of the 300 volunteers who helped put on the event. "We had food from just about every restaurant downtown, from El Pollo Alegre, from Walnut Hill Farm, from so many others. It has been neat to see people have turkey and dressing and tamales at the same time. That's Dalton."

"They are working in four shifts," she said.

By the time serving started at 11:30 a.m., the crowd had lined up down Crawford Street to the intersection with Pentz Street.

Organizers had hoped that 1,000 people would show up. But by noon they had served 400, and it was clear they were going to exceed that goal.

The event ran out of the "nontraditional" foods, but there was still plenty of turkey, dressing, mashed potatoes, green beans, rolls and desserts on the tables when the last people were served shortly after 1:30 p.m.

"All of the food was really good," said Sam Brown. "I hadn't even heard about this until I read about it in the paper. I'm really glad I came."

Coker said the event went beyond all of her expectations.

"We had more people than even our most optimistic projections, more volunteers. Everything went off without any major problems, and the weather turned out so great," she said.

So what do they have planned for next year to top this?

"Well, we'll have a bigger table," she said.

Mr. Herbert A. Pruitt, Sr, age 83, of Rocky Face passed away Tuesday, May 19, 2020, at Pruitt Health Lafayette. He was born on March 28, 1937 in Ducktown, Tn to the late John Gilbert Pruitt and Myrtle May Weaver Pruitt. He was a member of Dewey Baptist Church of White. He was a veteran of Un…