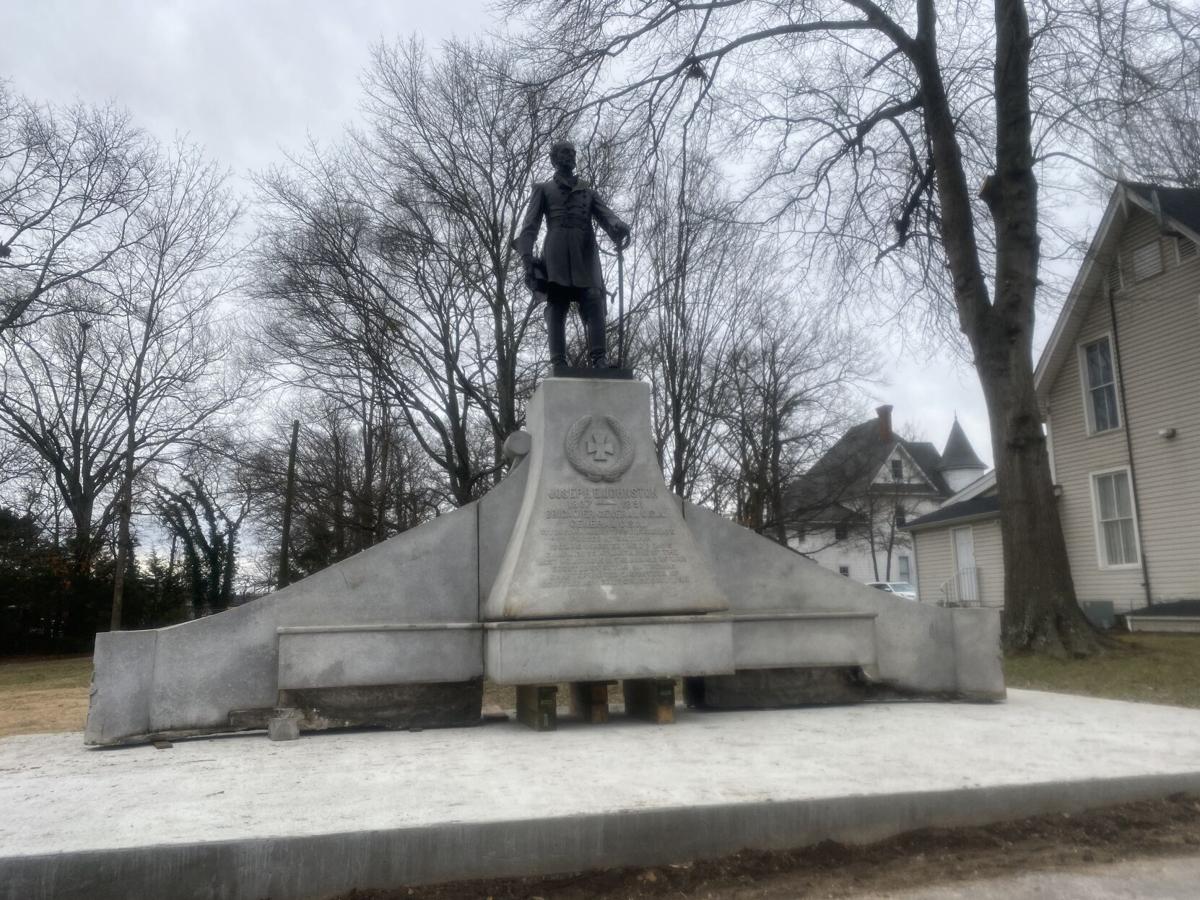 The Gen. Joseph E. Johnston statue was moved to the nearby Huff House early Saturday morning. 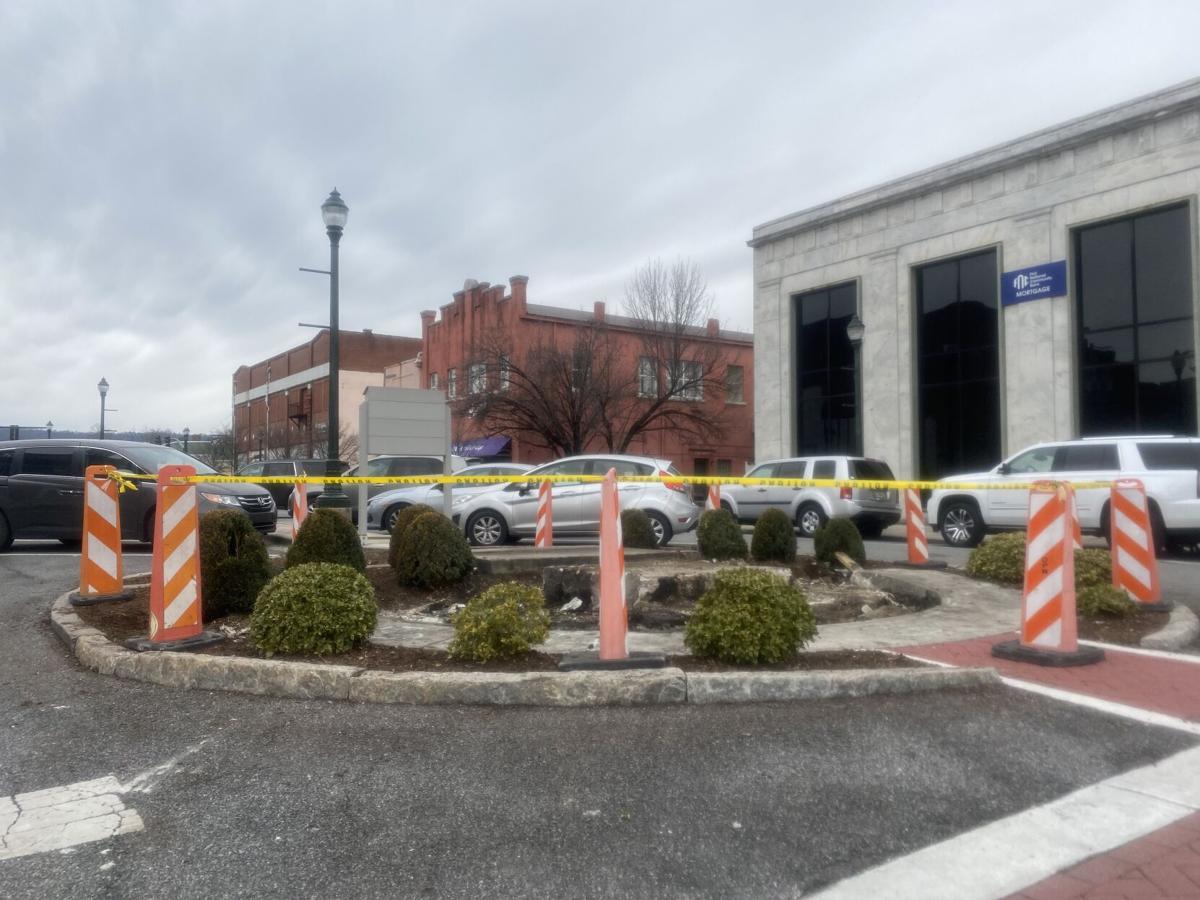 The site at the intersection of Crawford and Hamilton streets in Dalton where the Gen. Joseph E. Johnston statue stood for some 108 years.

After spending some 108 years in downtown Dalton at the intersection of Crawford and Hamilton Streets, the Gen. Joseph E. Johnston statue has a new home.

The statue, which was placed in downtown in 1912, was moved to the nearby Huff House early Saturday morning. The Huff House, on Selvidge Street, is owned by the Whitfield-Murray Historical Society and was Johnston’s headquarters during the Confederate Army of Tennessee’s winter encampment in Dalton for about six months from December 1863 to May 1864 during the Civil War. The local United Daughters of the Confederacy chapter owns the statue.

"It is a logical place for the statue where the history of the man, the statue and the house may all be interpreted and visited," said Dalton attorney Robert Jenkins, who is representing the UDC.

According to Bruce Frazier, communications director for the city of Dalton, "Money from private donors was used to fund the move and no taxpayer money was used for the project." The statue was moved in the early morning to "minimize disruption of traffic downtown," he said. The effort to move the statue, which weighs over 18 tons, started at 2:30 a.m. on Saturday.

"This was not an action of the city of Dalton," Frazier said. "There was never a vote by the mayor and council on this issue and this issue never appeared on any city agenda. This was a private decision by the UDC which owns the statue."

The statue was placed on a recently installed concrete pad in the backyard of the Huff House. The project includes placing a wrought iron fence around the statue and backyard; lights to illuminate the statue; and two security cameras covering the statue. Bids and estimates for the entire project have come in between $30,000-$35,000, Jenkins said.

"In many communities across our country, unfortunately, similar circumstances have led to violence, bloodshed, vandalism and destruction of people, property, businesses and statues," Jenkins said. "In Dalton, however, the various parties have worked together to find and to carry out a good solution. We hope that the new location of the statue will lead to greater interest to and support of the Huff House and our new partners in the Whitfield-Murray Historical Society Inc. as they strive to preserve all of our area’s rich history."

Statues of some historical figures, including Confederate military leaders, became flashpoints across the world as protests, some of which turned violent, filled numerous cities in the aftermath of the death of Minneapolis resident George Floyd, a Black man who died in police custody on May 25 when a white officer knelt on his neck for almost nine minutes.

In Dalton, protests, which have been peaceful, focused on the Johnston statue. Approximately 200 people filled the lawn of City Hall on June 8 following a “March for Justice,” and one of the demands of many was the relocation of the statue of Johnston to a “more appropriate place.” Some of the organizers of that march said they believed the Huff House would be such a place because of its connection to Johnston.

A Facebook group called Don’t Let Joe Go dedicated to preserving the statue at its current location formed soon after that march.

On June 13, defenders of the statue clashed with protesters during another march organized by the Atlanta-based Southern Advocacy Group when about 60 protesters stopped across the street from the statue. On several occasions, Dalton Police Department officers had to step in and separate marchers and members of the group that was watching over the statue.

The local Chapter of the United Daughters of the Confederacy expressed last summer that it was ready and willing to move the statue provided that a suitable location could be found AND provided that funds sufficient to safely handle the move could be secured as the UDC did not have any money to be able to do so. The city of Dalton expressed that it would not pay for any move or use any tax dollars. Members of the community at large including some of the original marchers volunteered to raise funds to pay for the move.

The Community Foundation of Northwest Georgia which took no position on the subject of whether to move the statue or not to move it, offered to serve as a conduit, or bank, to facilitate the anonymous donations required for the move.

Several possible locations were identified as potential places for the relocation of the statue:

1. Whitfield County graciously offered to permit the statue to be relocated to the new Rocky Face Ridge Park to be opened soon in Crow Valley. This was deemed to not be a suitable location for several reasons:

• The issue of maintaining the statue on public (i.e. government) lands still remained;

• The statue would move several miles out of town and outside of the downtown Dalton district where it was originally intended to be placed; and

• The new park, while it will have some civil war features and assets, will be a multi-use park including recreation, mountain biking, hiking, conservation and environmental uses in addition to historic uses.

2. The Confederate Cemetery at West Hill Cemetery. This was ruled out quickly for several reasons:

• There is insufficient room to place the statue without disrupting some graves or other monuments;

• That is a place of rest for those buried there and should be kept as such for them. There are 421 Confederate and four Federal soldiers buried there;

• There is a relationship between the cemetery and the city of Dalton which could arguably be considered public use under the meaning of applicable laws; and

• To the extent that any state or other laws applied, this statue was not originally designed to be placed in a cemetery or museum and thus should not be placed in one.

• This became the logical and best solution in which the UDC found themselves and the Board of Trustees of the Historical Society graciously voted and agreed to host the statue and give a lease to the UDC to relocate the statue there under certain conditions which had to be met:

• First, the Historical Society would not claim or acquire any ownership to or responsibility for maintenance of the statue, same continuing to be the responsibility of the UDC which has maintained the statue for over 100 years;

• The Historical Society would not pay for the move or for the installment of a new pad in which to place the statue;

• A fence surrounding the statue and part of the back yard of the Huff House site would need to be included in the project;

• 24/7 lighting would need to be installed on the statue;

• Security cameras covering the statue would need to be acquired and installed.

• The Historical Society would not insure the statue, same being the responsibility of the UDC.

The UDC was given an initial estimated budget based upon the pledged donations of $20,000 for the entirety of the project. Bids as high as $55,000 and $35,000 solely for the movement of the statue exclusive of all of the other costs outlined above came in from non-local companies. After several months of lining up bids and proposals, and using only local companies and persons, bids and estimates have come in at between $30,000-$35,000 for ALL of the work identified in the six parts to paragraph 3 above.

Donors willing to support this project next worked on raising the additional funding which was completed early this year.

The city of Dalton has provided the past several months to allow time for this project and all of the people involved to work together, and the city has assisted with the logistical support to ensure the safe relocation of the statue, but no tax dollars have to our knowledge been spent or allocated by the city.

One point that needs to be made very clear to the citizens of Dalton and Whitfield County: No one involved in this process has intimated or attempted to tear down or destroy the statue or the history of it. That group simply wanted it moved from a public property and were willing to pay for its relocation.

The historic Huff House was in fact the headquarters of Gen. Joseph E. Johnston during the Confederate Army of Tennessee’s winter encampment in Dalton for about six months from December 1863 to May 1864. It is a logical place for the statue where the history of the man, the statue and the house may all be interpreted and visited.

The location of the placement of the statue is significant and was chosen for several reasons. It will be placed on Hawthorne Street facing north which is symbolic of him facing north toward his former enemy. By placing the statue in this location, the Huff House may be viewed and enjoyed from the Selvidge Street, or west side, without the statue being in the viewshed of the house such that the house may be studied and enjoyed separately from the statue. Conversely, the statue may also be viewed, studied and enjoyed separately from the house and opportunities for photos of either historic site can be had separately. It allows each of the two sites to continue to have their own separate identities and prominence, while still being available to view and enjoy in one location. Additionally, the new location will better ensure its safekeeping with additional security measures of a fence, lighting and security cameras.

Thus, on the morning of Feb. 6, 2021, the process of moving the statue was completed. This date and time was chosen out of consideration for the many businesses, restaurants, churches and shopkeepers downtown so as not disrupt their business and to cause as little disruption as possible. For this reason, a weekday or Sunday was not chosen.

We provide this press release so that everyone can see both the circumstances and the process for how this project came together. In many communities across our country, unfortunately, similar circumstances have led to violence, bloodshed, vandalism and destruction of people, property, businesses and statues. In Dalton, however, the various parties have worked together to find and to carry out a good solution. We hope that the new location of the statue will lead to greater interest to and support of the Huff House and our new partners in the Whitfield-Murray Historical Society Inc. as they strive to preserve all of our area’s rich history.

Kris Richner passed away on Sunday, April 11th, 2021, at his residence in Dalton, Georgia. He was born April 26th, 1970, in Cumberland County, North Carolina, to Bradley and Jacqueline Richner. He was a graduate of Dalton College with a degree of Associate of Science. He worked as a Director…