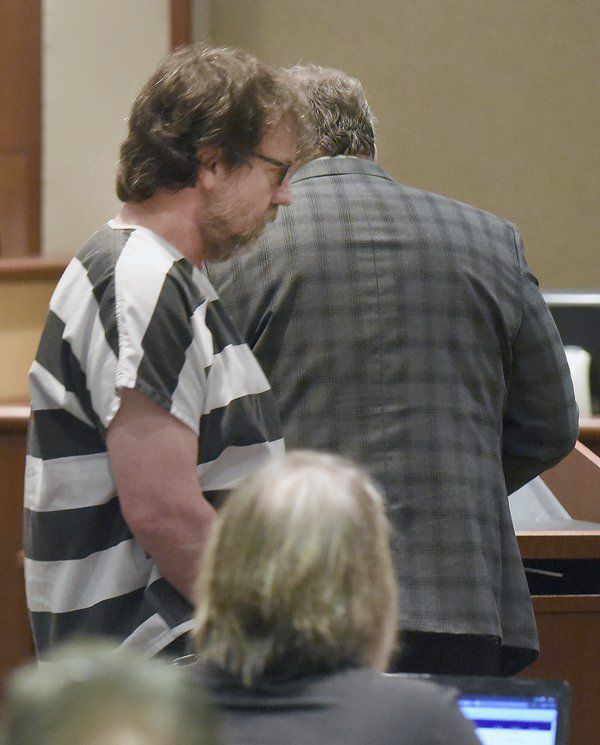 Former Dalton High School teacher Randal Davidson listens in court as his attorney, Richard Murray, speaks. Davidson pleaded guilty to first-degree criminal damage to property, carrying a weapon within a school safety zone and disrupting the operation of a public school on Tuesday and was sentenced to two years in prison. 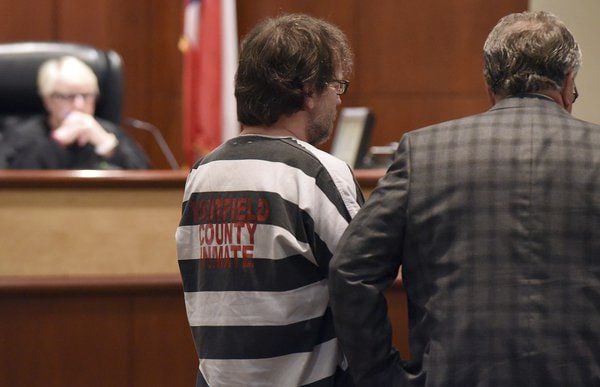 Former Dalton High School teacher Randal Davidson was sentenced to two years in prison Tuesday after pleading guilty to first-degree criminal damage to property, carrying a weapon within a school safety zone and disrupting the operation of a public school

Former Dalton High School teacher Randal Davidson listens in court as his attorney, Richard Murray, speaks. Davidson pleaded guilty to first-degree criminal damage to property, carrying a weapon within a school safety zone and disrupting the operation of a public school on Tuesday and was sentenced to two years in prison.

Former Dalton High School teacher Randal Davidson was sentenced to two years in prison Tuesday after pleading guilty to first-degree criminal damage to property, carrying a weapon within a school safety zone and disrupting the operation of a public school

On Tuesday, Bartoo told Superior Court Judge Cindy Morris of how he was contacted when students tried to get into teacher Randal Davidson's classroom and Davidson would not let them in. He told of how Davidson blocked him from entering the classroom and how when he tried to put a key in the door Davidson fired a gun, identified as a Taurus .38 caliber revolver, through a window in the classroom. He told of how he called for a lockdown of the school and how quickly the school resource officer responded.

"I recall how eerily quiet the school had become," he said.

The incident took place two weeks to the day after a shooting at a high school in Parkland, Florida, resulted in 17 deaths, and Bartoo said there was a real fear among students and staff that there was an active shooter on campus.

Bartoo spoke before Davidson pleaded guilty to first-degree criminal damage to property and carrying a weapon within a school safety zone, both felonies, and to disrupting the operation of a public school, a misdemeanor. He had also faced charges of aggravated assault and possession of a firearm during the commission of a crime. He was alone in the classroom and no one was injured by the gunshot.

Morris sentenced Davidson to two years in prison and eight years on probation as part of the plea deal.

Davidson spoke briefly to Morris, expressing remorse for his actions and apologizing for them. He said he had come to school that day contemplating suicide in a place he felt loved.

District Attorney Bert Poston said in a press release that "the investigation which followed, led by Dalton Police Department Detective Chris Tucker, determined that Davidson’s goal that day was most likely to be killed by the police, an act sometimes described as 'suicide by cop.'"

Murray said the state Department of Corrections has medical facilities that can help Davidson with his treatment and he will contact the state psychologist who examined him to see if he can help with his placement.

Murray said Davidson did not intend to harm anyone when he brought the gun to school.

"The school was the place he felt loved," he said. "He did not mean to hurt those kids. But he was so absorbed in his own depression and his own mental illness that he just wasn't considering them. Yes, he is responsible for his actions, but there are mitigating factors."

As a convicted felon, Davidson will not be able to own any firearms after he leaves prison, and as a condition of his probation, his probation officer will be able to search his home to make sure he has no firearms. While on probation, he can have no contact with current students at Dalton High School including any who graduated as part of the class of 2018, he must undergo mental health treatment as directed by probation at his own expense and take any medications prescribed to him, and he can't go on any school property, public or private. He will not be able to work in or serve as a volunteer in education or any field involving minors. He must also pay a $1,000 fine, a probation supervision fee and restitution of $16,133.97 and must perform 100 hours of community service.

He must "transfer supervision to another jurisdiction and remain outside the Conasauga Judicial Circuit (Whitfield and Murray counties) while on probation," the press release said.

Poston said in an interview his office had a series of meetings at Dalton High School with staff, faculty and parents.

"The consensus of that group was that two years in prison would be appropriate," he said. "We did want him to serve some time in prison, but we also thought it was important for him to get out and get mental health treatment."

Poston said he believes Davidson's apology was sincere. He said in the press release that Davidson had cooperated with law enforcement.

"I do think he regrets what happened. But he made the choices to do what he did," he said in the interview. "Yes, there are some mitigating circumstances and he does have some mental issues he needs to address, but he made those choices."

Davidson had had several interactions with law enforcement before the February incident. In January 2017, the school resource officer at Dalton High was told a staff member “might be missing,” according to a Dalton Police Department incident report. About two hours later, school staff said Davidson had been found on School Street. When the officer arrived, he saw Davidson sitting on a curb being held up by two school staff members. Davidson had walked his property with a rifle in August 2016 after setting his car on fire in a possible "suicide attempt," according to a Dade County Sheriff's Office report. In March 2016, he "wanted to confess to having someone killed," according to a Dalton Police Department incident report, and told an officer and a detective about being part of a plot against a woman with whom he had had an "internet affair." Police could not determine if the woman existed and they could not verify if any of the information Davidson gave them was true.

Bartoo said he thought the sentence is "fair."

"This is an important day for our school and our school community," he said. "We really needed a resolution to this, particularly before we begin the new school year. The sentence is fair. I appreciate the work of Mr. Poston and the victim/witness assistance staff. Their communication with us was excellent throughout this."

Bartoo said Davidson's statement was the first time he had heard from him since the shooting.

"I think his apology was sincere," he said. "I know that Randal was a good teacher, and what happened caught us all by surprise. It hurt."

In March, current and former students of Davidson walked from Harmon Field, where the Dalton High Catamounts play, to the Whitfield County courthouse to show their belief that the teacher who was accused of firing a gun in a classroom was not the teacher they knew.

“I don’t excuse his actions,” said Briana Cedillo at the time. “There has to be some consequences for them, but I still see him as the same funny, supportive teacher I knew.”

Cedillo, an education student at Dalton State College, said Davidson had inspired her to become a teacher.

Davidson was also the radio play-by-play announcer for Dalton High football, the voice of the Catamounts.

Rick Zeisig is the Dalton High football public address announcer and worked one booth over from Davidson in the press box at Harmon Field during games. Zeisig said he met Davidson in 1995 when Zeisig was working at a local radio station that hired Davidson.

"It breaks my heart," he said. "We've been praying for him. I can't imagine what his family is going through. He has done so much for so many people. I just hope this isn't the way he is remembered."